Developer Larry Stone’s long crusade to get ponderosa pines planted on the North Spokane Corridor has paid off.

Stone has received permission from the state department of transportation to allow planting of the trees on the newest stretch of the north-south freeway.

On Sunday, Stone will lead a group that will plant 5,000 trees. They will meet at the southern end of the corridor and work north before circling back south.

In previous years, Stone worked with the WSDOT and Boy Scout volunteers to plant about 5,000 pine seedlings along the corridor.

In 2017, Stone commissioned a study at Gonzaga University that showed how the pine trees would save the state money on chemicals for spraying noxious weeds.

“Spokane has always valued its ponderosa pines as part of its landscaping,” Stone told The Spokesman-Review in February of 2018. “It’s not a conservative issue; it’s not a liberal issue. It’s an everybody issue.”

City leaders hope to grow Spokane’s tree canopy by 30 percent by 2030, focusing on many of the city’s poorest and most sparsely planted neighborhoods.

Most of those trees are in the city’s oldest neighborhoods, with areas like East Central and Hillyard having fewer trees.

Councilwoman Lori Kinnear said more trees across the entire city not only will increase home values and reduce pollution, it’ll also create a city today’s residents can pass down to the next generation.

“It’s not just for us, it’s for the people that come after us,” she said.

Kerry Brooks, an EWU professor who led a 2016 study on the equitable placement of Spokane’s street trees, said planting more trees is “low-hanging fruit” for cities looking to become more sustainable. He said other methods to filter stormwater, reduce emissions and create clean, green spaces, can be far more expensive. As Spokane becomes even more urban, he said, it’s also more important than ever to purposefully plan green spaces.

Kinnear, who is sponsoring the proposals, said she hopes to set up a way for the city to offer financial incentives, like paying less in stormwater charges, to encourage people to plant more trees. She said the 30 percent tree coverage by 2030, also lines up with the city’s goal of reducing carbon emissions by 2030.

Her legislation, which would be introduced on either Earth Day or Arbor Day, is the first of two steps to clarify street tree rules and gather feedback on what incentives the community would like to receive for planting trees. She said she doesn’t yet have specific proposals, savings or cost worked out yet and will have more details once she meets with the Plan Commission and gathers community feedback. 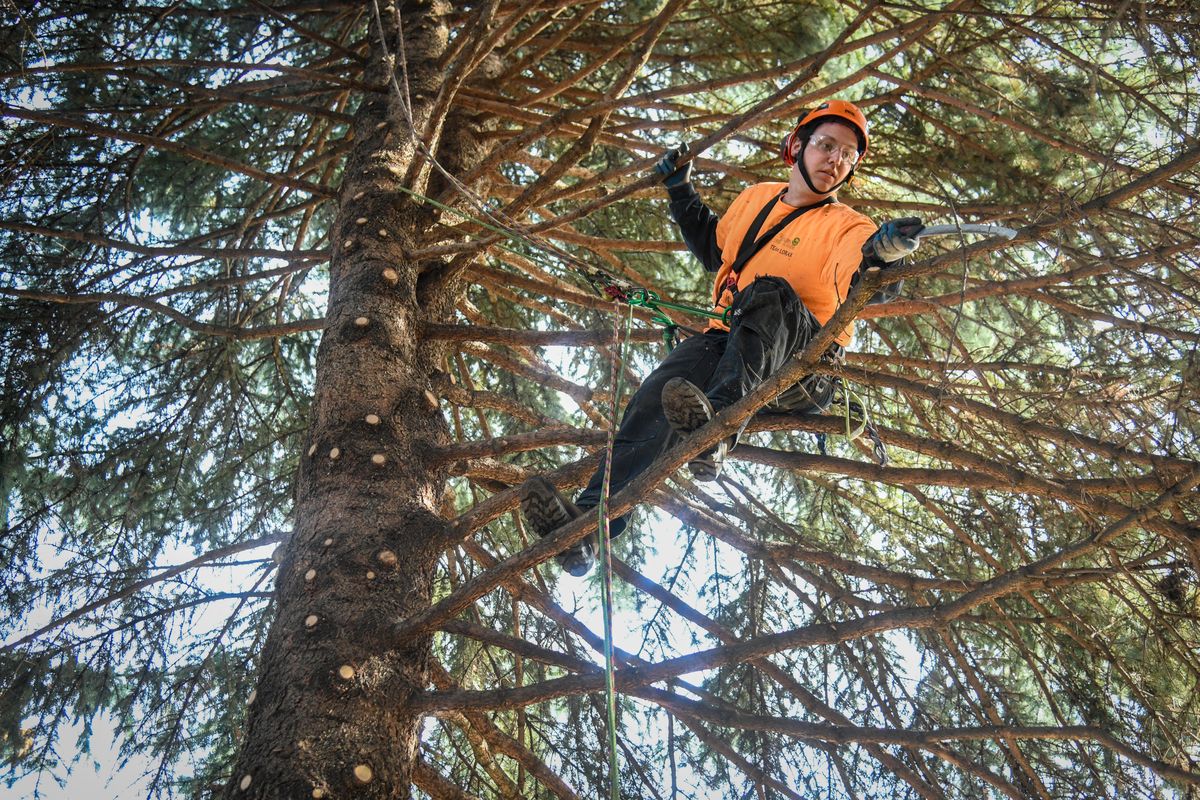 As the city looks for places to create green spaces, or encourage homeowners and developers to plant, it needs to prioritize neighborhoods who need them the most, Kinnear said.

“We have to be thoughtful about where we’re actually going to be locating trees and that it’s equitable across the city,” she said.

Brooks said the people who live in low-income neighborhoods without trees also may not own vehicles. He said people without cars may take public transportation or walk more, spending more time in an environment without trees offering shade or filtering the air.

He said it’s difficult to pinpoint why some neighborhoods are greener than others, but it could be because many people in lower-income neighborhoods are renters instead of homeowners or may not be able to afford, or maintain, a tree. He said the city’s history of slowly annexing the land around it over the years could also be a possible explanation of the disparity in tree cover across the city.

He said some parts of the city still don’t have sidewalks or street trees because at the time, Spokane, or Spokane County, didn’t require builders to include them.

Kinnear said she also hopes the push to plant more trees will diversify the city’s tree population, more than 18 percent of which are maple trees.

Katie Kosanke, a city urban forester, said Spokane’s tree population could take a hit by a maple-specific pest or disease. She said other communities have lost elms and ash trees due to Dutch elm disease or the emerald ash borer.

The largest groups of maples are in northwest and southeast Spokane.

Kosanke said maples are no longer on the approved tree list, and the city encourages people to plant other trees that aren’t as prevalent, such as oaks, sequoias and elms, as well as ornamental trees.

Kinnear said she hopes to get to 30 percent or more tree coverage by 2030 through both city and community planting. By September, she hopes to have any land use changes, and tree planting incentives, ready to present to the public.