That’s because the Spokane Chiefs eliminated the U.S. Division champion Everett Silvertips four games to one with a 2-1 victory Saturday at the Arena.

The playoff tradition of growing beards during the playoffs lives on in Spokane, as the Chiefs will meet the Vancouver Giants in the Western Conference final. The best-of-7 series begins Friday in Vancouver.

For Everett, its season comes to a disappointing end.

“We just took down the top team in the league, without even a Game 6 or 7,” Spokane goaltender Bailey Brkin said. “I’m just so proud of the boys for pulling it out.”

Brkin stood tall in net and stopped 34 shots, including all 16 the Silvertips sent his way in the third period.

Riley Woods scored his sixth goal of the postseason at 5 minutes, 24 seconds of the second period on the power play to give Spokane its winning score.

Smith logged the heavy minutes because the Chiefs were without defenseman Filip Kral, who was suspended by the league after picking up a game misconduct penalty in Friday’s loss.

Without Kral, Matt Leduc moved up to the second defensive pairing alongside Nolan Reid. Leduc’s big body came in handy at 8:24 of the first when he leveled Everett’s star Connor Dewar with a ferocious hit that set the tone for the rest of the game.

“I thought that had a big effect on the game. I thought a lot of our guys were physical,” Chiefs coach Dan Lambert said. “(Everett is) the top team in the league. The reason for that is the way they compete and outwork, and I thought tonight we pushed back early in the game and that was critical.”

Robbie Holmes opened the scoring for Everett just 1:32 into the game, sending a shot over Brkin’s shoulder.

“I was pretty upset about that,” Brkin said. “Robbie Holmes is a great guy who I grew up with, and I take him to my goalie sessions in the summer so he knows where to shoot on me. He made a nice play and went roof on me.”

The Chiefs tied the score at the 10-minute mark of the first when Nolan Reid sent a shot on the power play that pinballed past Everett goaltender Dustin Wolf.

While the Chiefs spent plenty of time with the man advantage, they did not have to kill a penalty until Luc Smith took a double minor for boarding with 3:27 left, giving Everett a solid chance to tie the score.

But the Spokane penalty kill didn’t give the Silvertips much to shoot at, and Brkin came up big. Ty Smith credited the maturity of his team and the demeanor of his coaches. 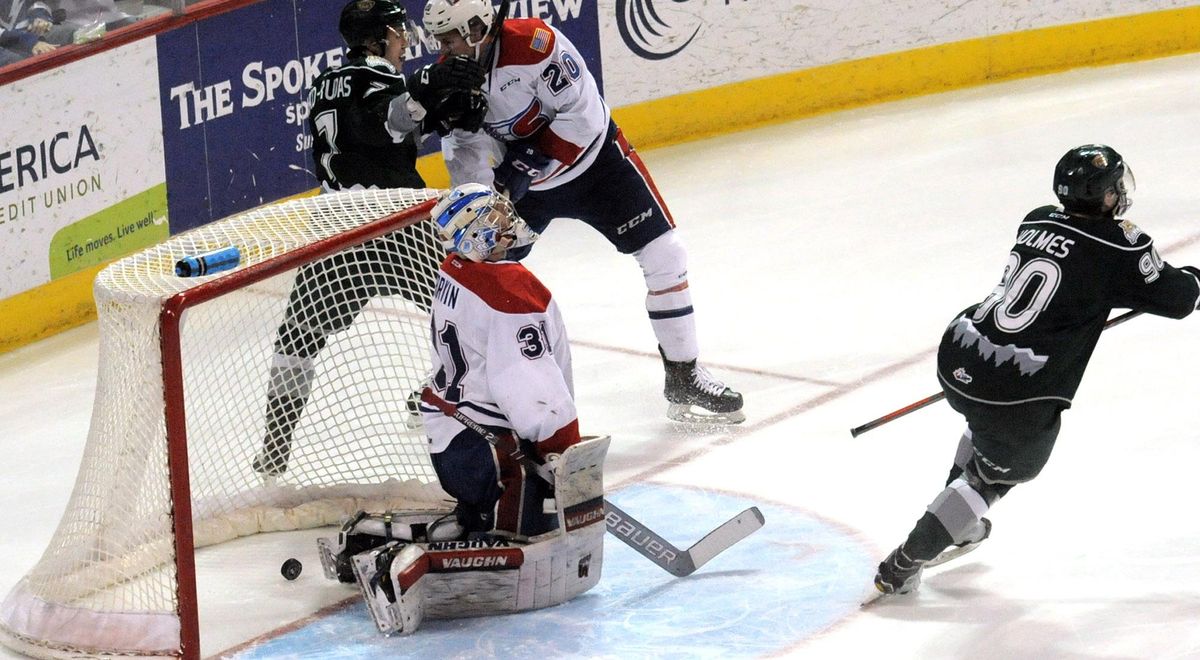 Spokane Chiefs goalie Bailey Brkin reacts to a score by Everett Silvertips during the first period of a WHL playoff game, Sat., April 13, 2019, in the Spokane Arena. (Kathy Plonka / The Spokesman-Review)

“We were definitely thankful that we have such calm coaches,” Ty Smith said. “I think most of the guys stepped up and stayed positive instead of getting down. I think we did a pretty good job of that and (Brkin) played unreal the whole game and the whole series.”

Smith said his ice time wasn’t something completely planned in the day leading up to the game. Instead, with the game on the line and the Chiefs hoping to end the series, he was put in a position to make sure that happened.

For him, the mindset was one of peace and positivity.

Lambert touted his team’s buy-in, especially when the plan this series was to limit Everett’s chances first and rely on the Chiefs’ scoring depth second. That’s a different plan than the regular season.

“It’s a special group,” Lambert said. “Honestly, when you look the guys like (Jaret) Anderson-Dolan, Ty Smith, Riley Woods, Nolan Reid, Luc Smith, you can just go down the line, and the great thing is all our young guys are learning from those guys and learning from this experience.”