Ray Garland, who lived to tell the story of being so close to a Japanese dive bomber during the Pearl Harbor attack that he could see the pilot’s goggles, has died.

At 96 years old, Garland was the last regional survivor of that pivotal moment in American history. He died Thursday in Coeur d’Alene.

Last December he made the trek to Spokane, as always, for the Pearl Harbor remembrance ceremony.

Clad in a light windbreaker and gloveless despite the December chill, Garland laid a wreath at the Pearl Harbor memorial at the Spokane Veterans Memorial Arena.

“The only thing I could think about was representing the few that are no longer with us,” he said.

The roster of the Lilac City Chapter of the Pearl Harbor Survivors Association numbered 125 at its peak in the mid-’90s. Three years ago, only Garland and Charlie Boyer remained. Boyer died April 15, 2016. 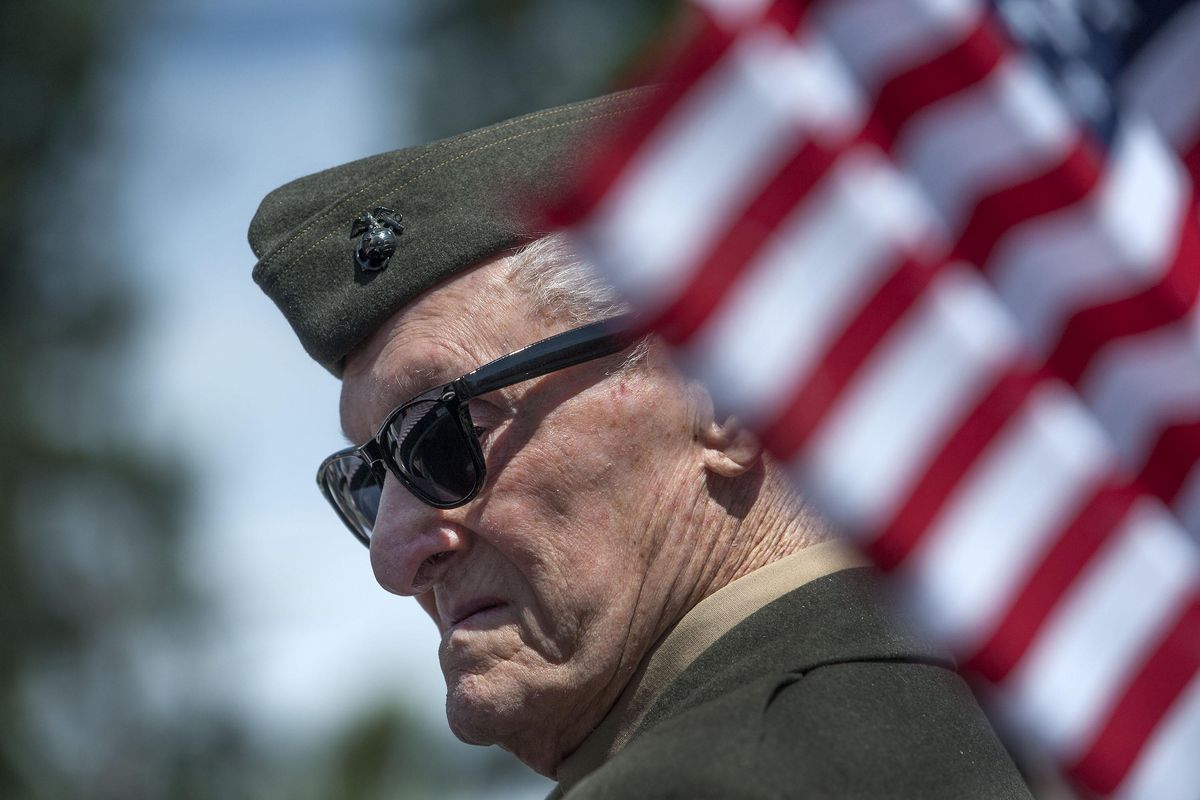 Pearl Harbor survivor Ray Garland was Grand Marshall for the American Heroes Parade on July 4, 2016 in Coeur d’Alene. He died Thursday at the age of 96. (Kathy Plonka / The Spokesman-Review)

Lonely, to be one of the few remaining survivors of the surprise attack that resulted in the deaths of 2,403 Americans and catapulted the nation into World War II. Lonely, to bear the weight of those memories.

The Montana native had enlisted in the Marines as a teenager because he liked the look of their dress blue uniforms.

On Dec. 7, 1941, Garland, 19, was the youngest man in the Marine detachment aboard the USS Tennessee. He arrived on deck at 8 a.m. for flag detail.

In previous interviews, Garland recounted his eye-witness recollections of the attack and its aftermath.

“I heard a noise,” he recalled. “A corporal said, ‘Turn around,’ so I did. I saw a Japanese dive bomber flying alongside us. He was so close, I could see his goggles.”

The flag wasn’t raised that day.

As the plane flew past him, Garland turned and saw a swarm of planes bombing Ford Island. As he scrambled to his duty station, he saw the USS Arizona, moored just 75 feet away, take several hits. A huge explosion followed as a bomb penetrated ammunition magazines. The noise was horrific.

Burning oil and debris from the Arizona quickly ignited fires on the Tennessee.

Garland was pressed into firefighting duty. He and a sailor opened a hatch and saw flames along the bulkhead. He pointed a hose at the fire and saw a bright flash.

That was the last thing he saw. Later he learned the insulation had been burned off the main power lines. As he sprayed water an electrical charge shot up through the hose, scorching his face and eyes.

After three days in sick bay, he resumed his duties. “There were a lot of people in worse shape than me,” he later said.

During the next two years, Garland served aboard the Tennessee and participated in the Aleutian, Marshall and Gilbert Islands campaigns.

After the war ended in 1945, he married, moved to Spokane and started a family. But soon the Marines came calling again.

In 1950 he was recalled to active duty when the Korean War broke out. He spent 10 months in Korea with the 1st Marine Division. While he was one of the youngest at Pearl Harbor, when he landed at Inchon, he was one of the oldest.

Just like in Pearl Harbor, he didn’t get out of Korea unscathed. During a firefight, a bullet ricocheted and struck him in the leg.

He was thankful to make it home.

After his first marriage failed, Garland moved to Coeur d’Alene and wed Beverly Plumb in 1976. A shadow box in the basement of their home bears witness to his military service. Among other military decorations, the box contains two Purple Hearts and a Bronze Star.

During an interview he ran his fingers along the top of the shadow box.

“I think I was a good Marine,” he said, and shrugged.

“He was one tough Marine,” she said.

Hipperson met Garland through her work with the local Pearl Harbor Survivors association. She’s currently working on her third book about the history of the war in Korea according to the memories of a Marine, and frequently consulted Garland for advice and feedback.

As the last remaining military veteran in the local Pearl Harbor Survivors group, Garland’s death marks the end of an era, she said.

“Ray’s death is a great loss to our community,” said Hipperson. “But he never wanted to be called a hero. He often said ‘Those who gave their lives that day are the heroes. I’m just a survivor.’ ”

Garland is survived by Beverly, his wife of 43 years, three children, two stepchildren, 11 grandchildren and nine great grandchildren. His memorial service will be 1 p.m. Friday, April 26 at Christ the King Lutheran church in Coeur d’Alene.