PULLMAN – For anyone hoping to unearth some clues about the quarterback competition at Washington State, and where it stands through 14 of 15 spring practices, Saturday’s spring scrimmage was awfully helpful – if not somewhat conclusive.

The Crimson and Gray Game serves more than one purpose, but the storyline that many have been glued to this spring – a close battle between two redshirt senior QBs – offered another major plot point underneath gray/rainy skies at Martin Stadium.

Quarterback Anthony Gordon completed 21 of 30 passes for 234 yards, three touchdowns and just one interception, and was undoubtedly the superior quarterback in a 25-24 win for the Crimson team. Gordon played exclusively with the Gray team, which held a 21-7 lead at halftime when the 6-foot-3, 205-pound senior came out of the game for good.

Trey Tinsley, the other redshirt senior and former JC quarterback pushing for the starting job at WSU, got a longer leash and played briefly in the second half. He atoned for a few of his early mistakes, but still finished with subpar numbers: 11 of 21 for 155 yards, one touchdown and two interceptions.

“I thought Gordon went out there, played pretty well, let it rip,” WSU head coach Mike Leach said. “I thought Trey was tentative at times. I thought Gordon in particular had a pretty good scrimmage.”

“(Gordon) just went out and played, didn’t try to do too much, made routine plays. The first couple were kind of shaky, but the biggest thing is, he didn’t let anything bad happen really other than the interception. He didn’t take negative yards, did a good job converting on third and fourth down.”

Gage Gubrud wore a sweatshirt and sweatpants on the sideline and it’s widely known WSU’s QB competition won’t start in earnest until the Eastern Washington graduate transfer heals from a foot/ankle injury that greatly limited his activity and participation this spring.

But Gordon still made good use of the opportunity. He moved through the pocket smoothly, threw on the run when the defense collapsed and was crafty, delivering the ball from a variety of angles.

“I try not to scramble. Good things don’t usually happen when I run outside the pocket too much,” Gordon said. “But extending plays, it’s something that can help the offense out and I was happy to be able to make some plays like that and help the team move the ball today.”

Gordon’s first drive was capped with a touchdown pass to converted inside receiver Kassidy Woods on a short slant. Calvin Jackson Jr. caught Gordon’s next touchdown on a similar route and the QB threw his third downfield to Travell Harris, who was unmarked when he reeled in a 33-yard pass.

“I trust Gordo, I knew he’d put it there,” Harris said. “He just threw a great ball.”

Early on, Tinsley was right there with him. He was 4 of 5 on his first drive and went deep to Renard Bell for a 31-yard touchdown.

But Tinsley’s second drive was marred by an interception. The QB lost the ball as he wound up to throw and Gray team defensive end Nnamdi Oguayo secured it in the air. Tinsley’s offense went three-and-out on the next drive and his end-zone shot to close the half was intercepted by free safety Bryce Beekman.

“Started out pretty strong, had a good first drive and then just kind of plateaued a bit,” Tinsley said. “Missed some open guys. Pretty frustrating, but I thought overall it was OK. There’s some good stuff to take away and obviously some bad.” 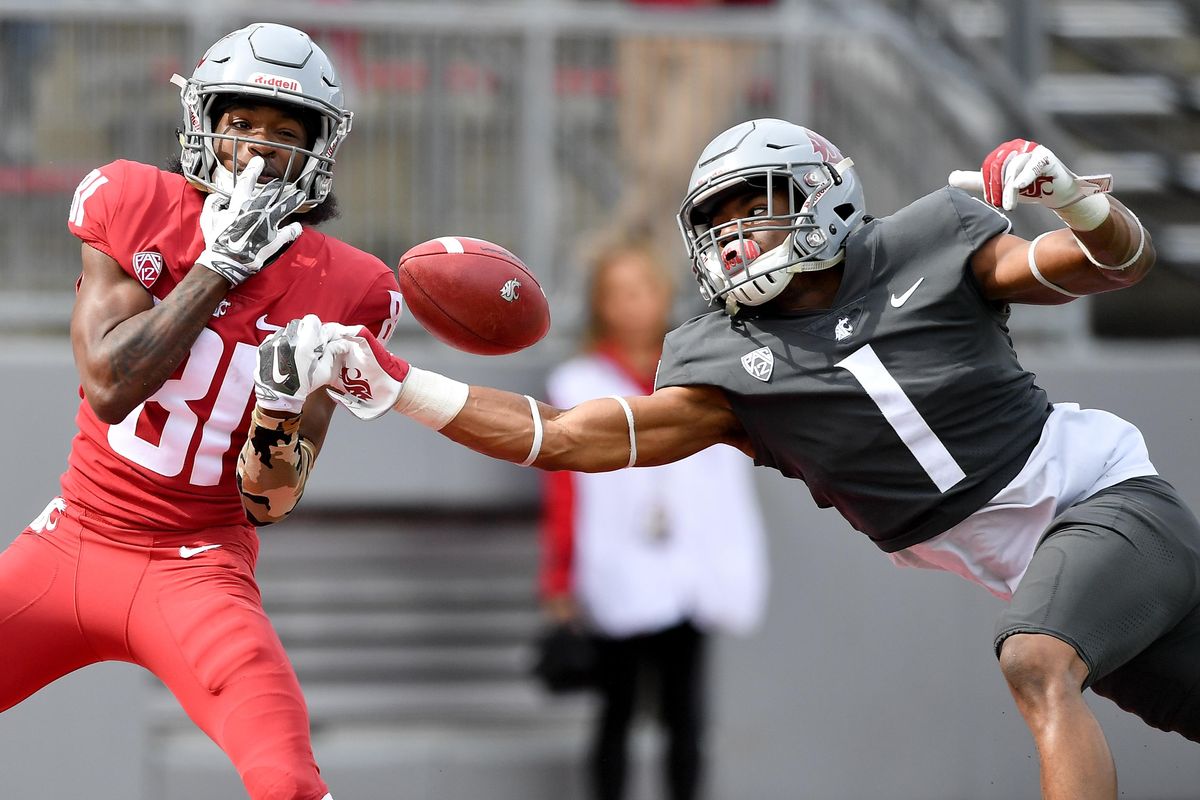 Both of WSU’s projected starters at “H” receiver, Bell and Harris, had strong performances, finishing with 108 and 103 yards, respectively. Jackson Jr. and Easop Winston Jr. combined for another 13 catches and more than 100 yards.

At times, the strength of the defense was the pass rush, which generated seven sacks – five coming from Will Rodgers III (three sacks) and Tristan Brock (two).

Other times, an opportunistic defensive secondary looked to be the best unit on the field. It produced four of the five interceptions – one each from Beekman, Hicks III, Jalen Thompson and Tyrese Ross.

“We got a few takeaways, which is always good to see,” defensive coordinator Tracy Claeys said. “A lot of the quarterbacks scrambled, so we must have been doing decent in coverage back there. Early, we gave up too many plays, but overall I thought the secondary did pretty good.”

The Cougars will hold one final spring practice, Tuesday in Pullman, which is typically used to review and correct any mistakes made in the Crimson and Gray Game.

“I think the coaches like that more than us,” Rodgers said. “It’s kind of like missed assignments, things like that. But it does keep us responsible, keep us accountable for our mistakes we made on the field today.”