A GRIP ON SPORTS • Hold on to you baseball cap. You know the one. It has a Seahawks or Cougar or Eagle or Vandal logo on it. Hold on to it because your mind is about to be blown. It is August already. The month football begins, really begins.

• It’s always been that way, of course. At least in my not-all-that-short lifetime. Pro football kicked off with the college all-star game (look that one up my think-the-world-began-in-1999 friends) early in the month at Solider Field in Chicago. College football would start practice later in the month, ready to start games in mid-September. Even high schools started practice in August where I grew up, one of the reasons my dad, who liked to vacation then, wasn’t sad when I told him I would rather not play the sport at St. Francis. (The fact I was 5-foot-2, lineman slow and weighed about a buck sixty also had something to do with his relief as well I think). 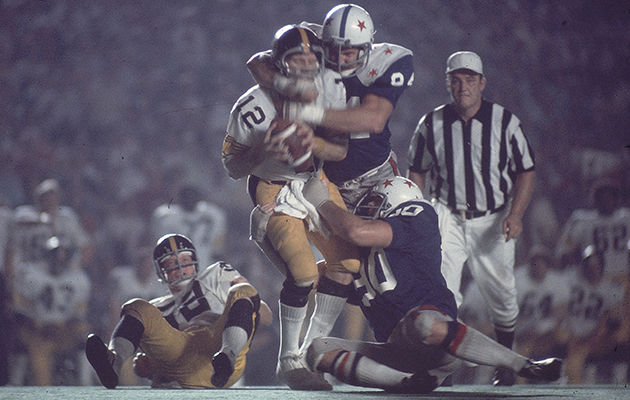 But these days schedule creep has pushed the practices, in a lot of cases, into July, though much to everyone’s peace-of-mind, games don’t begin until – checks the calendar – what the heck, tonight? Jeez.

Yep, there is an NFL exhibition this evening. The Hall of Fame Game from Canton, Ohio, featuring two teams with varying degrees of Super Bowl hope: Denver (miniscule) and Atlanta (tiny).

We avoided having an NFL preseason game in July by 19 hours folks. That’s a win.

But from tonight on, there will be football until Feb. 2 of next year. Thank goodness. That still leaves us nine months to pay attention to the presidential race.

So what happens this month? The Seahawks play four preseason games. The Broncos, Vikings, Chargers and Raiders, in that order. The regular season kicks off against the Bengals on Sept. 8 at home. In the college ranks, Washington State opens practice tomorrow in Pullman, than leaves for Lewiston for a week. The Cougars will sweat and strain in the valley heat before heading back to campus prior to school's start. They open the season this month, albeit the last day of it, hosting New Mexico State at 7:30 that night.

Hopefully, Mike Leach will decide on a starting quarterback by mid-August, though he probably won’t tell anyone outside the team until the pregame show.

Eastern will have played by the time WSU kicks off, as the Eagles travel across the state to face the Huskies in a noon kickoff the last day of the month.

If you are looking for a bit of sanity in college football scheduling, look no further than Whitworth. The Pirates don’t play in August, and play just two games in September, both in Southern California. Wait, there isn’t a game at the Pine Bowl until Oct. 5? That’s a bit off-kilter. A late-summer, early fall game there is just about picture perfect. And a throwback to days gone by.

WSU: This column’s subject yesterday, the proposal to start a Pac-12 game or two at 9 a.m., was also the main subject of my conversation with Larry Weir on the latest Press Box pod. Though other subjects came up. … Around the Pac-12, you know it’s football season when you lose track of the number of stories open in your web browser. Let’s see, the Huskies want to rule the Pac-12 again. They will need a standout quarterback to get that done. … Oregon’s diverse staff will count on the Ducks’ secondary. … Oregon State has improved, but will that show up in the record? … Colorado begins practice today with a new head coach. … Utah is the conference favorite (and the favorite in the South), but the Utes received some bad news recently when a projected starting linebacker decided to retire from the game. … UCLA also begins practice today. … USC has big questions to answer. … Arizona State and Arizona have been practicing for a while. … In basketball, just what the heck is going on at Utah? … USC and Villanova will play an exhibition game for wildfire relief. … Arizona has lost a player to a transfer. He's headed to BYU.

EWU: Eric Barriere received his chance last season to show what he could do when starting quarterback Gage Gubrud was lost to an injury. He did. It was a lot. And earned him a preseason honor yesterday. Ryan Collingwood delves into that in this story.

Idaho: It’s been an odd offseason for the Vandal basketball team. Coach Don Verlin fired. Zac Claus named interim coach. Player transfers. Recruits coming in. Summer workouts are over, so Peter Harriman caught up with Claus and spoke with him about where the program is these days.

Running: Professional distance running is a lonely way to make a living, unless, of course, you are part of a club. That describes former Shadle Park High runner Nick Hauger’s circumstances perfectly. Ryan has this story on his evolution from the GSL, though the University of Portland and now into the pro ranks. … Steve Christilaw marvels at some of his friends’ running accomplishments.

Indians: Spokane had five players named to the Northwest League’s All-Star team that will face the Pioneer League’s best on Tuesday. Dave Nichols has a story on the Indians selected. … Spokane won again last night in Eugene, taking the series in the process. … Elsewhere in the Northwest League, Everett fell at Hillsboro again. Mariners: We would have written about the bevy of trades the M’s made yesterday except Jerry Dipoto was relatively quiet. He sent Mike Leake to Arizona, Leake’s offseason home, and relief pitchers Hunter Strickland and Roenis Elias to Washington in separate deals. As soon as I heard Strickland was headed to D.C. I laughed. He was the Nationals’ most hated player a couple years ago when he waited more than a year to plunk Bryce Harper for a perceived slight. Harper is now in Philadelphia, so if Strickland hits him again, he won’t be booed. … The trades left the M’s bullpen dangerously thin and it showed last night in a loss at Texas. … Gene Warnick’s has his Out of Right Field recap of the game and the trades.

Seahawks: Talk about stories. The Hawks’ rock star punter is heard from; so is an oft-injured running back. Bobby Wagner’s contract is dissected; so is how much Cassius Marsh likes it in Seattle and DeShawn Shead made his way back to town. … A rookie needs some guidance.

Sounders: Defender Brad Smith is staying in Seattle as his loan was extended. The loaning of players is something I wish baseball would adopt for September. How much would the Yankees be willing to give up for the use of, say, Kirby Yates, for a month and the postseason?

• A quick heads up. I was asked yesterday to play golf tomorrow morning in Indian Canyon charity tournament that benefits Hospice of Spokane. How could I say no? A chance to lose a few golf balls while helping an organization that is dear to my heart – and will probably be even more important to me in the no-too-distant future. Anyhow, tee time is earlier than I usually have this feature finished, so I am taking the morning off. We will be back here Saturday, unless I can’t find my way out of the woods on 12. Until then …