The Colville Confederated Tribes will release more salmon Friday, this time above the Grand Coulee Dam.

The release is open to the public. Although times haven’t been set, it will be near Keller, Wash., on the Sanpoil River arm.

For more information, including time and place, visit facebook.com/CCTFNW/.

NESPELEM, Wash. – While rain and wind scrubbed the air of wildfire smoke, members of the Colville Confederated Tribes released 30 salmon into the Columbia River upstream of the Chief Joseph Dam on Friday.

The release, while modest, is the first time salmon have been in that stretch of the river since the Chief Joseph and Grand Coulee dams were built in the 1950s and 1930s, respectively. And the release represents a tangible step toward an ambitious plan years in the making: the reintroduction of salmon to the upper reaches of the Columbia River.

“This is a good step in the right direction,” tribal council member Rodney Cawston said to the 100 or so people who attended Friday’s ceremony. “To right something that has been wrong for 80 years now.”

The event started with council members addressing the assembled crowd near Nespelem, while the salmon waited in an idling tribal fish and wildlife truck. As an elder led the group in a traditional prayer, the large, migratory fish could be heard thrashing about in the transport truck, as if eager to get going, as one attendee noted. 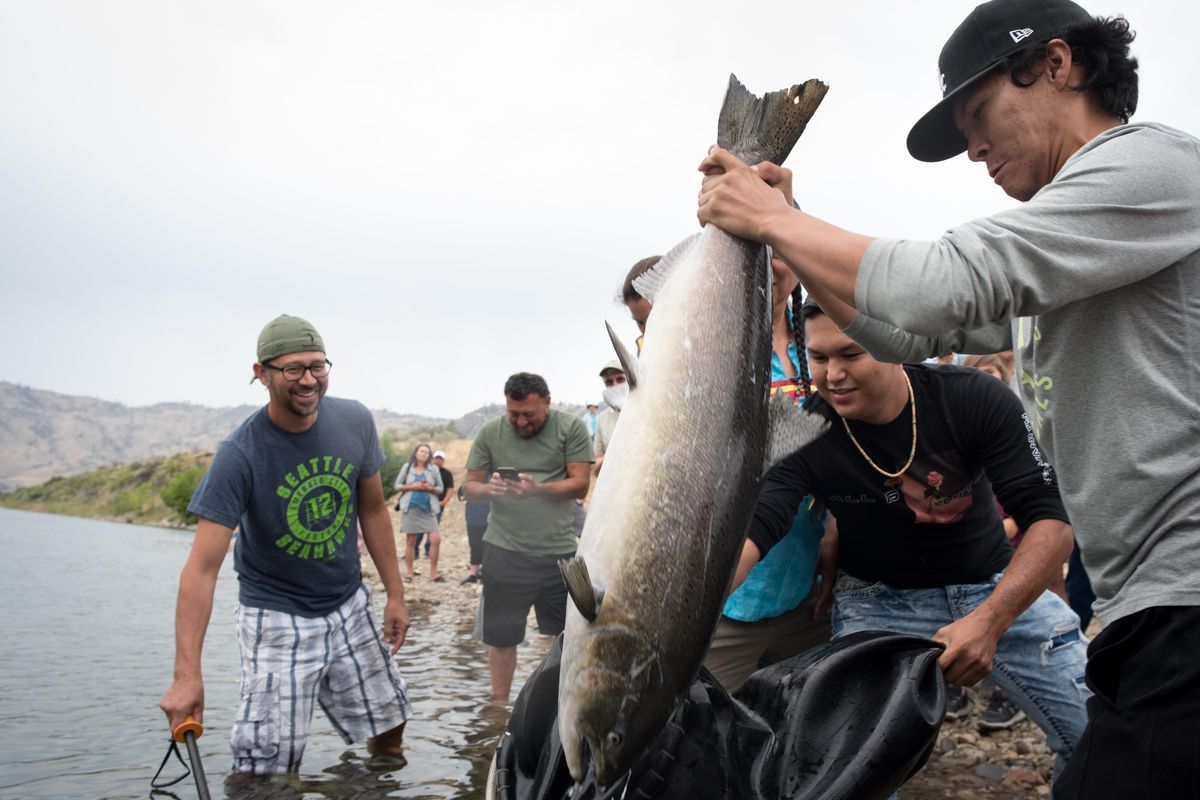 A salmon is held by the tail before being released the Columbia River on Friday while Pat Tonasket, left, watches. (Eli Francovich / The Spokesman-Review)

After the ceremony, the fish were removed, and one by one placed in large, rubber boot-like containers. They then were handed to lined-up tribal members (and nonmembers), each holding the sacred fish momentarily before passing them down the line.

At the river’s edge the salmon were released. Some instantly darted off, disappearing into the opaque water. Others rested, momentarily, before venturing into their new home.

“The salmon spirit, he’s been missing here for a while,” said Darnell Sam, another tribal council member. “No matter what is thrown at us, or thrown at them, they seem to survive and they seem to keep coming.”

While the release was billed as a cultural event, the line between indigenous cultural knowledge and modern science is a blurry one.

“When we look at our culture, it is applied science over thousands of years. We innately know and understand the timing of the fish. The timing of the roots when they come up. The berries,” said John Sirois, a fisheries coordinator for the Upper Columbia United Tribes. “All these lessons, they are tied to our spirituality. But it’s also applied science.”

He points to recent scientific “discoveries” that have backed up ancient indigenous knowledge, Kennewick Man being a prime example.

In 1996, an ancient skeleton was found on the shores of the Columbia River. At the time scientists said the skeleton was only distantly related to Native American tribes in the region, despite the claims of the Umatilla Tribe and others that Kennewick Man was one of theirs.

Which isn’t to say modern science isn’t playing a role in the ongoing effort to bring salmon back to the Upper Columbia, Sirois said.

The Whooshh fish passage, also known as a salmon cannon, boosts fish up and over dams. Current tests and research show that it’s both safer and more efficient than either traditional fish ladders or capturing and trucking salmon around dams.

Despite the dams, the river above the Grand Coulee Dam contains hundreds of miles of spawning and rearing habitat suitable for steelhead and spring Chinook production, according to research done by the Spokane Tribe.

The release of the 30 salmon Friday is part of the second phase of a plan developed in 2014 by the Columbia River Tribes. In addition to pilot releases, such as Friday’s, the tribes are also looking at fish passages and habitat.

The 30 fish released were trucked from the Wells Salmon Hatchery in Chelan, Washington. The Washington Department of Fish and Wildlife examined the fish to make sure they were disease free. All 30 were tagged with PIT tags, which allows biologists to track where they go and how they do.

That work is ongoing, and to some extent uncertain.

But what was clear Friday was the ceremonial power and cultural importance these fish still hold.

Virginia Redstar said she’d dreamt of Friday’s release in the spring. Redstar, a Nez Perce and Wenatchee band member, grew up with salmon stories and the sadness of her elders at the loss of the fish. Releasing the fish Friday, she said, starts the healing process.

And in the same way the dams blocked the passage of the fish, she said, indigenous culture and tradition has been blocked.