RITZVILLE - Larry Yockey seeded 1,200 acres of wheat last fall as he always did.

Following two years of bumper crops, he believed 2019 had the potential to be another strong season. Then, during the depths of winter, Yockey received the devastating news: he had stage four melanoma.

The initial treatments went well, though the daily fatigue and pain from bone decay would prevent Yockey from being able to fully do his work. As spring turned to summer and his crop turned into a golden carpet of grain, Yockey realized that 30-plus years of harvesting his own crops was about to end. He could not climb into his combine and steer it through the field.

In some ways, Yockey was fortunate. The cancer diagnosis came just a matter of days after an appointment with a visiting dermatologist in Ritzville.

Yockey had been in pain and not feeling well. His family suspected it was a flu bug he just couldn’t kick in the middle of winter, so he decided to see his doctor.

After running a series of tests, with no real results, Yockey’s doctor discovered a spot on his back. As luck would have it, the traveling dermatologist who comes to Ritzville once a month happened to be in town. The dermatologist took samples for a biopsy and Yockey got the call just a couple days later.

“It was already stage four and spreading,” he said.

The diagnosis came as a shock to the family.

“It was just happenstance (that the dermatologist was there), and wow, it was definitely meant to be found I think,” Amanda Yockey, Larry’s daughter, said.

The cancer had spread to the bones but not to any major organs. After a few months of taking eight pills a day, the cancer receded a bit. Unfortunately, however, his two cracked ribs and hip were not healing as he hoped. He was restricted to lifting no more than 15 pounds.

The family began crunching numbers to see if they could get their 1,200 acres custom cut and how many workers they would need to hire. What they didn’t know was that longtime friends and neighbors already had a solution.

A few weeks before harvest time, Brian Doyle and another friend approached Yockey with their plan for a harvest bee. Enough farmers would bring their combines and grain trucks to harvest all 1,200 acres in a single day.

After several phone calls and texts, it was settled. Farmers would arrive at Yockey’s fields on a Sunday - their regular day off - and work until their friend’s crop was harvested.

Amanda Yockey remembers getting a call from her dad. He said, “We don’t have to worry about harvest.”

“He was choked up, and I got choked up,” Amanda says.

On Sunday July 28, Yockey went out to his fields early in the morning. He fired up his own combine just in case it was needed. But there were so many local farmers that day that it wasn’t needed. About 18 combines and 20 grain trucks were assembled. Drone footage a local farmer took shows red and green combines swarming Yockey’s land in careful coordination.

Before the sun set, trucks carried 74 loads from Yockey’s fields to the warehouse in Ritzville where grain is piled and then shipped to Portland for export to Asia and Africa. 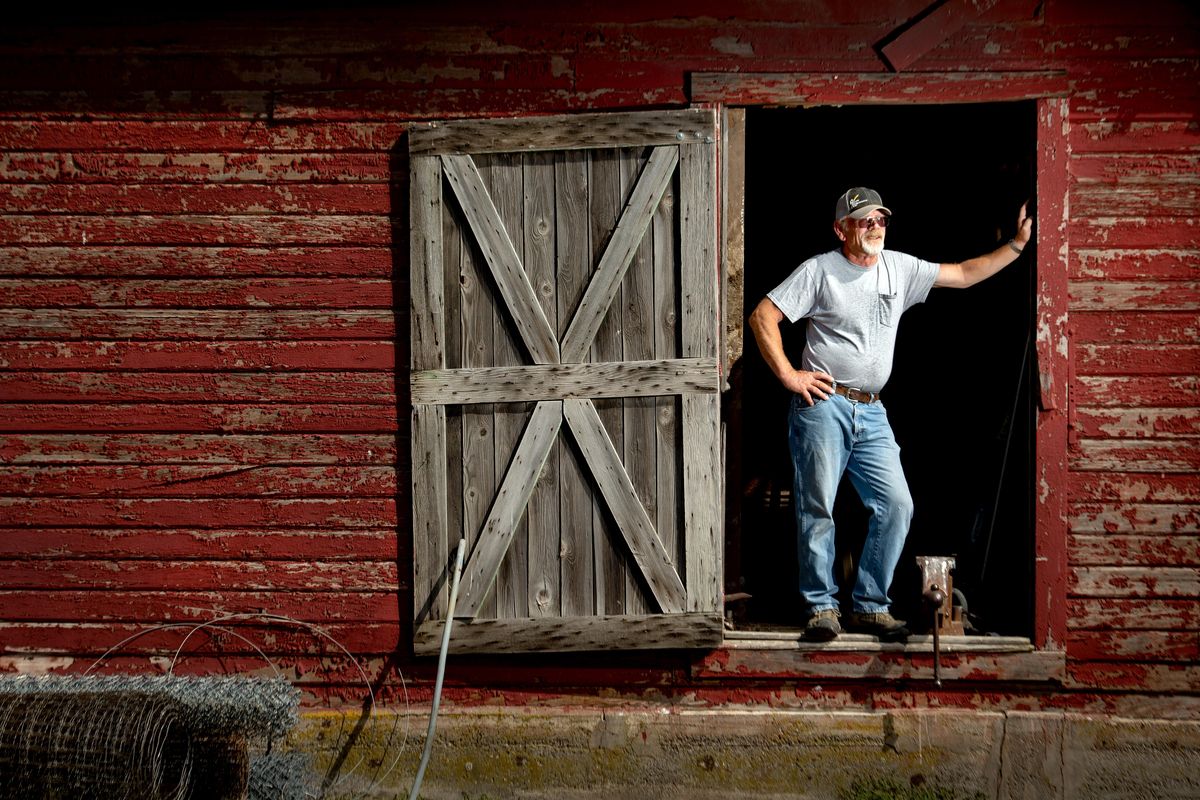 “We worked with the warehouse, and they made a special deal for us, so we were the only ones hauling in,” Doyle said.

What would have taken Yockey on his combine and a few hired workers weeks to harvest was finished in about six hours.

Larry stayed at base camp, the big shed in his field, while the combines hummed, where they ate donuts and drank coffee, water and later, beer.

Two volunteer fire department trucks were on-site to make sure the operation stayed safe. McGregor, a fertilizer and agro-chemical company with operations in Ritzville, helped keep the dust down with water.

Tim Young, service manager at McGregor’s site in Ritzville, said such community involvement is the norm.

“Everybody here would pitch in to help any of them out,” Young said.

Amanda remembers yelling at her dad to sit down at some point duing the day, knowing he needed to rest.

Little Yockey, or Amanda, said she is the only one who can yell at her dad and get away with it. The nickname suits her. She has emulated her father from a young age, wanting to farm. She went to the University of Idaho and studied agricultural economics and business, after seeing her father use his business degree to farm.

“I’ve wanted to do it since I was a kid,” she said. “It’s a pretty crazy history; I’d be a fifth generation farmer.”

Doyle and Yockey have daughters that grew up together, and most of the people who showed up on Sunday were longtime friends-turned-family. Doyle said Yockey has always been willing to help others out. He ticked off a list of examples when Yockey would help a neighbor finish harvesting after fires or clean up debris following windstorms. The July 28 harvest bee was a way for the community to return the favor.

“It was a way for everybody to pay him back for all he’d done for the community,” Doyle said.

The harvest bee garnered national media attention, with a segment featuring the community coming together to harvest for Yockey on CBS Evening News, spurring local affiliates to pick up the clip or do their own stories. Yockey said old classmates from high school or college have reached out since then.

Yockey said he tried to go around and personally thank everyone involved. On Monday, he went and thanked all the businesses that donated equipment and manpower to his harvest. His 2019 harvest ended up being an above average yield.

Farming has been a part of the Yockey family for more than a century. The road he lives along bears his mother’s maiden name. In 1906, his grandfather built the white farm house Yockey and his wife, Kelly, live in now. It’s sandwiched between Highway 395 and the main railroad lines, but Yockey’s grandfather had direct access to his land back before the highway was built.

Yockey, born and raised in Sunnyside, went west for college and work at first, graduating from the University of Washington with a business administration degree and working at Boeing for about seven years.

The call to return home came in 1984 upon the death of his grandfather. Yockey’s father, a retired school teachers, was working the farm and needed help.

“I like to hunt and fish and do outdoor activities, and I was spending half of my time driving to eastern Washington anyway, so I bought the equipment and the rest was history until the cancer shows up,” he said.

Now Yockey goes to Spokane for his cancer treatments. Sometimes he drives to his appointments in the bucket-list Corvette he recently purchased. He said the side effects of the treatment are not too severe, though he does suffer fatigue around mid-day.

He is grateful for his doctor’s attentiveness and the visiting dermatologist who was delivered such a swift diagnosis.

“People don’t appreciate your GPs (general practicioners), and they are in short supply,” he said. “But they are invaluable out here in the rural areas, because it gets you started through the process.”

Traveling doctors, too, provide additional support for small communities. Yockey said his cancer doctor arrives once a month from Spokane to Ritzville.

This fall Yockey hopes for a return to the rhythms of farming and plant another 1,200 acres of wheat.

“We’re leaving that door open for her,” Larry said.

Amanda said the family, which includes her mom, dad and two older sisters, has good days and bad days, but that the harvest bee was the first time she has seen her father relax since the diagnosis.

I don’t regret any of those weekends I went back to hang out with my parents (during college) because you never know how much time you have with the ones you love,” she said. “… We have good days and bad days, and every scan makes us nervous. And every time he gets his results, I go to Ritzville and we read them together. It’s made me appreciate the little moments a little more.”

Her appreciation for friends unselfishly helping each other also has deepened.

“It was incredible, and that’s small town USA, and that’s exactly why I will never leave these towns.”