A GRIP ON SPORTS • Stop whatever it is you are doing. Take a moment – and a deep breath. Isn’t it grand? That’s August in the Northwest right there. The smell of a pine tree. Freshly cut grass. Asphalt baking in the sun. Yep, summer is still holding the area tightly in its grip. But fall, and all that entails, is only a month away.

• One of the sure signs summer is winding down is the closure of the public pools. Yep, it’s always around 90 degrees this time of year – and will be today – but the local pools are no longer available, at least the county ones. The ones in the city close next week.

It’s understandable, what with most of the lifeguards college kids and all, but it doesn’t seem right the pools close during what usually is one of the warmest times of the year.

But that isn’t the only sign we are preparing for the change.

The Spokane Chiefs are in the midst of training camp. Think about that. It’s so hot outside you could fry a French fry on a sidewalk (if you had a fryer, some oil and a long extension cord) and a bunch of young guys are skating around the ice, trying to make the roster of a junior hockey team.

Heck, if the air conditioning goes on the fritz at the Arena, they could open the rink for youngsters to swim.

• Why do college football awards have preseason watch lists? For the publicity, of course. Some of the ensuing ironic talking points, however, may not be exactly what you want.

There is one problem.

Gubrud may not start for the Cougars. As Theo Lawson has reported this week, all indications (and Mike Leach’s own words) have Anthony Gordon, a fifth-year senior, leading that battle.

Gubrud may still end up the starter. He may still put up the numbers that warrant inclusion in the Unitas Award’s midseason watch list. But on August 20, his name on the list – as well as a couple of other Pac-12 quarterbacks who aren’t currently guaranteed playing time – is a bit of a head-scratcher.

• Growing up, my best friend for a few years was my back neighbor Steve Hardy. We were inseparable. We hiked together through the hills around Sierra Madre. We biked all over Southern California. And, occasionally we would throw the football around with his dad and uncle. 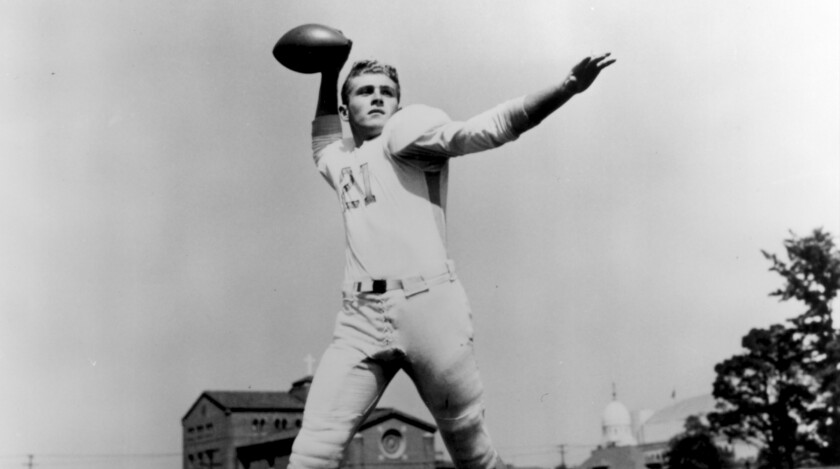 Little did I know then how special that last activity actually was.

Steve’s dad was Don Hardy, an end for USC who not only was drafted by the NFL but also the Cleveland Indians. And his uncle, who all 12 kids in the Hardy household just called Uncle Jim, seemed to throw a pretty good spiral. He should have. He was a Rose Bowl MVP, throwing three touchdown passes in the 1944 Rose Bowl and two more in the 1945 version. Talk about talented brothers.

Don died riding his bike around the San Gabriel Valley years ago after he retired from his long career in the aerospace industry. And Uncle Jim, who never bored the neighborhood kids with stories about his more-than-decent NFL career, died a few days ago at age 96.

I will always remember him as just a guy who used to throw me passes in a buddy’s backyard.

WSU: The Cougars’ offensive line depth just got thinner. Theo Lawson has the news backup Christian Haangana is no longer with the team. … Theo is an Associated Press Top 25 voter, a process he explains here. He also has a story on Washington State voted in the 23rd slot in the preseason poll. … Finally, Theo took some time yesterday to talk with Larry Weir about all those things in the latest Press Box pod. … Elsewhere in the Pac-12, there is no shortage of news, except for, maybe, on the starting quarterback front. … Washington checked in ranked 13th, just behind Oregon, which was 11th. Utah is ranked 14th. … The Ducks lost another receiver to injury this week. … Oregon State isn’t ranked but they have a running back who should be on watch lists. … It only seems as if every Colorado player has changed positions. … The Utes rely on their defense. … UCLA is relying on chess. … Three games may make or break USC’s season. … Football takes a backburner to being a dad for one Arizona State player. … Arizona’s depth chart isn’t as full of holes this season.

EWU: Speaking of polls, the Eagles were ranked third in the FCS coaches’ poll.

Indians: Talk about being the opposite of jinxed (there has to be a word for that, right?). Spokane seems to be able to grab victory out of a 10-pound bag of defeat at will. The Indians did it again last night against Eugene. Dan Thompson explains how it happened. … Elsewhere in the Northwest League, Hillsboro and Everett picked up wins.

Mariners: Of all the things that have happened this season, the way the catching platoon has worked might be the most positive. Tom Murphy’s two home runs helped the M’s win again yesterday in Tampa. … Felix Hernandez had another rehab stint last night and said he’s ready to rejoin the M’s rotation. … Prospect Jake Fraley is headed to the big club.

• You may notice some changes with the S-R website today. They came this close to causing me to be unable to post this column. I had to figure out a work-around when I was logged out. Thankfully, I was able to pull an 12-year-old Matthew Broderick off the street and he hacked his way in. Then I had to wait for him to finish a game he was playing. Until later …