Several folks came over to examine the perfectly formed green heads growing in the garden box.

“How about these tomatoes, too?”

One person burrowed under a 3-foot tall plant and came up with two dead-ripe tomatoes and a big smile on his face. It was like that all over the quarter-acre plot as the garden crew took stock of the ripening crops. All around were gorgeous plantings of carrots, zucchinis, pumpkins, winter squash, peppers, watermelons, potatoes and more.

So just where is this garden? 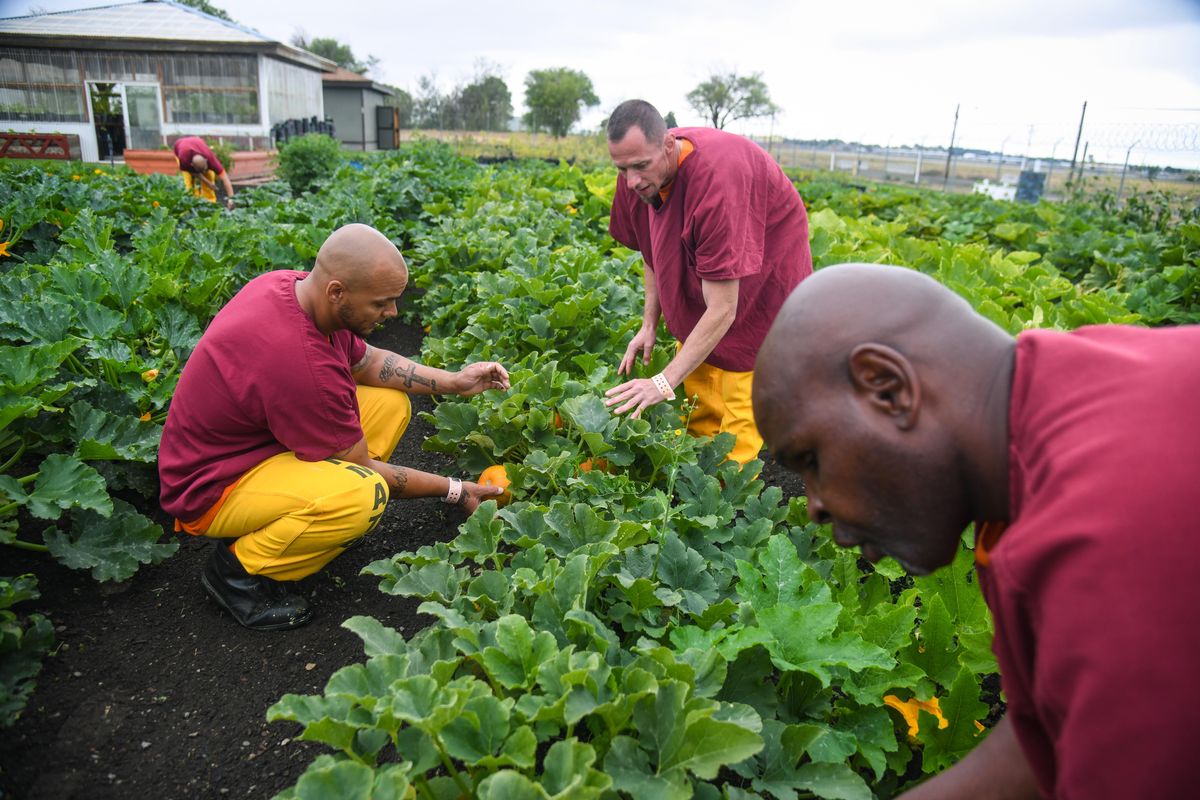 Nathan Miller, Aaron Strom and Jody Thomas check on the progress of the pumpkin patch in the vegetable gardens at Geiger Corrections Center, Thursday, Aug. 22, 2019. (Dan Pelle / The Spokesman-Review)

It’s out on the West Plains, where the wind blows hard, the soil is rocky and unforgiving, and the rock chucks devour anything not fenced off. It’s also behind the razor wire of the Geiger Corrections Center.

Yes, the garden is run by inmates who are “guests” of Spokane County for varying periods of time.

“The garden serves as an opportunity for the guys to learn and practice communication, teamwork and interaction skills as well as practical skills around growing food and basic construction techniques,” said Spokane County Detention Services program officer Ted Tofsrud, who supervises the garden with fellow officer Josh Cobb. “The produce is donated to the Union Gospel Mission and distributed to other meal kitchens in the area. So far this year, we’ve donated 1,400 pounds and hope to get 4,500 pounds by the end of the season.”

Extra produce not donated is placed on a cart outside the visitors center for inmates’ families to take.

The garden means a lot to the 11 members of the garden crew. Aaron Strom said that working in the garden and on the grounds maintenance crew gives them a way to give back to the community as well as learn new skills.

“It’s the giving back that is most important to everyone here,” Strom wrote in a letter on behalf of his teammates. “We are able to work hard and use our pent-up energy for the greater good of our communities.”

Strom’s words were echoed by fellow inmate Daniel Alexander: “We are blessed to be out here making it look good and sharing.”

Geiger’s gardening program has been active for about 10 years. It was started by staff who were gardeners and knew how working in a garden made them feel. Using donated materials to build raised beds, the staff worked with interested inmates who earned the privilege to work in the garden. As the benefits to the garden crews became obvious, the program expanded.

Two years ago, with the support of the center’s management, the garden was expanded to its present quarter-acre. Ziggy’s Home Improvement donated the materials to build taller boxes and compost bins. The Lands Council helped develop a storage nursery for trees they use in restoration projects around the region. The crew then added a large open bed to grow crops too big for the raised beds.

Last week, there were pumpkins, zucchinis, squash and cucumbers sprawling across the open ground. One pumpkin was already getting into the 40-pound range. Along the side of the garden, crew members built a series of nine compost bins where they recycle all their garden trimmings as well as the grass clippings from the grounds maintenance work.

“We want to be producing all our soil needs from these bins within the next year,” Tofsrud said.

The crew grows all its plants from seed, starting transplants like tomatoes and peppers indoors in a classroom and direct seeding others when the ground is ready. As part of the garden expansion, the crew converted a picnic shelter near the garden into a greenhouse. Inmates Alexander and Daniel Coll, the crew’s construction and sprinkler gurus, are working to get heat and a dependable drip irrigation system up and running so they can grow more plants next spring. The greenhouse is currently heated by large barrels of water painted black that absorb heat.

The garden crew is responsible for all the projects in the garden.

“We show them how to do something,” Tofsrud said. “And they take it from there. They learn as they go.”

Beside Alexander’s and Coll’s work on construction and irrigation, inmate Dwight DeHaven maintains the tree nursery while Jody Thomas works the grounds keeping team around the correction center.

Nathan Miller keeps track of the tool shed, so everyone can find the tools they need quickly. All the work is done by hand.

“We work together and take ownership of the garden,” Strom said. “We feel pride every time we go out into the garden. We are giving back to the community.”

Tofsrud added that the group is respected throughout the facility. “They mentor each other and learn to resolve issues amongst themselves.”