TUCSON, Ariz. – Corey Kispert scored 18 points to lead four Bulldogs in double-figures, and No. 6 Gonzaga held off No. 15 Arizona at the McKale Center on Saturday night.

Gonzaga looked primed to celebrate a big victory over a Pac-12 foe when it held a 16-point lead with 1 minute, 30 seconds remaining. However, Arizona fired off a 15-1 run over the next 1:20 to cut the GU lead to 2. Gonzaga guard Ryan Woolridge hit two free throws with 1 second left to finish the game off.

Filip Petrusev scored 16 points and grabbed seven rebounds for the Zags. Joel Ayayi added 15 and Admon Gilder came off the bench to add 13 points on 4-of-4 shooting from 3-point range.

Josh Green led Arizona with 17 points but took 15 shots to get there. Foward Zeke Nnaji powered UA from the inside with 16 points and 17 rebounds.

Arizona, behind Nnaji’s play inside, jumped on the Bulldogs early. UA led by nine with 11 minutes left in the first-half before the Zags started to claw back.

Kipert gave GU its first lead when he connected on a transition 3 with 1:20 left in the first half.

The Zags had two big runs in the second half to build their big lead. A 12-0 run pushed the lead to nine early in the half and an 8-0 run later pushed the edge to 16 before Arizona’s rally.

Each team scored 38 points in the paint, but Gonzaga found an edge in transition. The Zags outscored the Wildcats 23-9 in fast-break points.

Woolridge finished with eight points and four assists in 38 minutes for Gonzaga.

Chase Jeter and Dylan Smith each scored 10 for Arizona. Wildcats freshman point guard Nico Mannion was held to seven points on 3-of-20 shooting.

Gonzaga held on 84-80 in front of 14,644 at the McKale Center, registering its second big road win over a Pac-12 Conference title contender a week, following its 83-76 victory over Washington last Sunday. | Read more »

When the two best college basketball programs in the West battle on a Saturday night in December, you would expect ESPN to put its best next to the court – and our living rooms. | Read more »

Gonzaga-Arizona: 3 keys to the Bulldogs’ 84-80 victory over the Wildcats 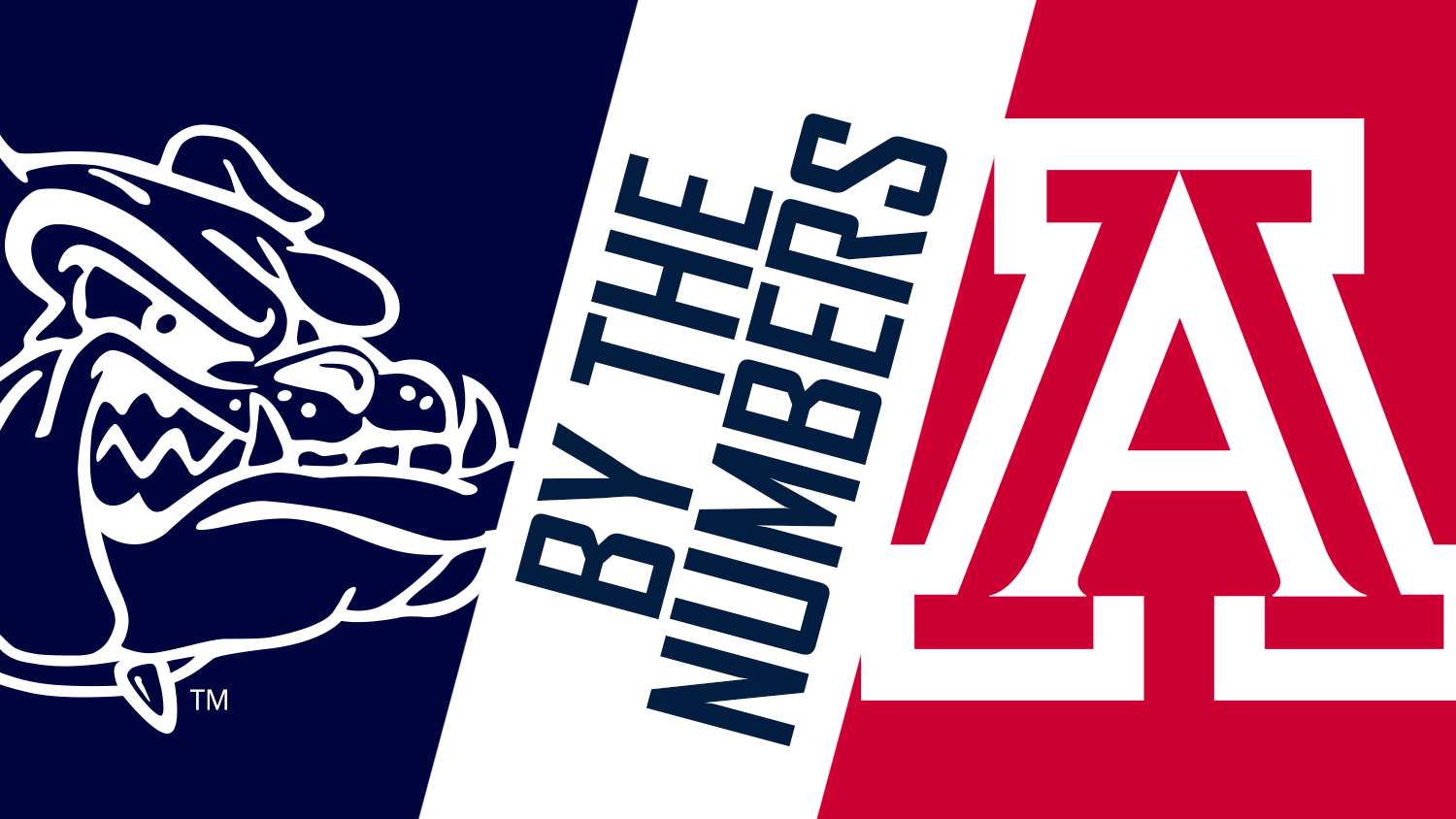 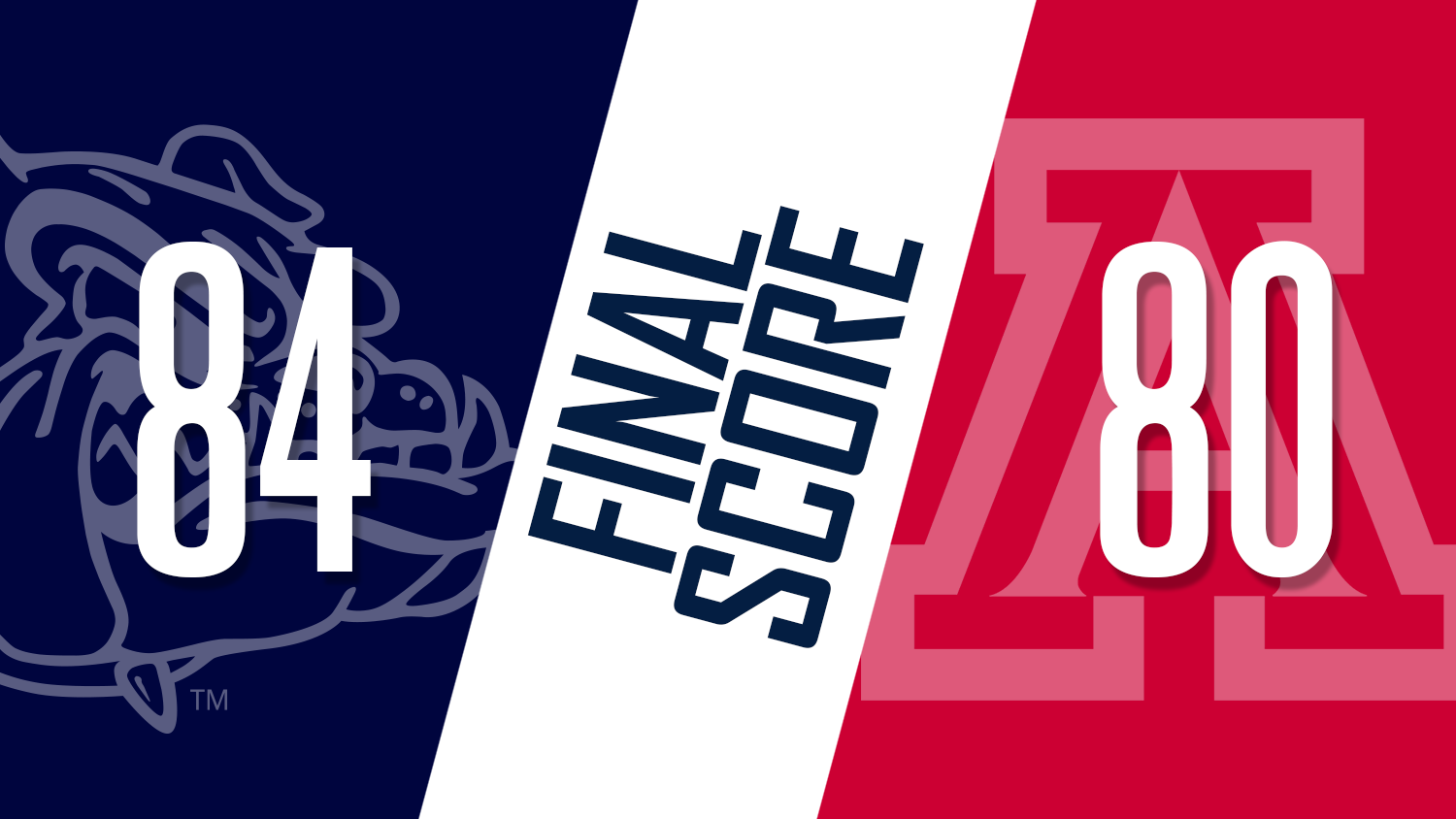 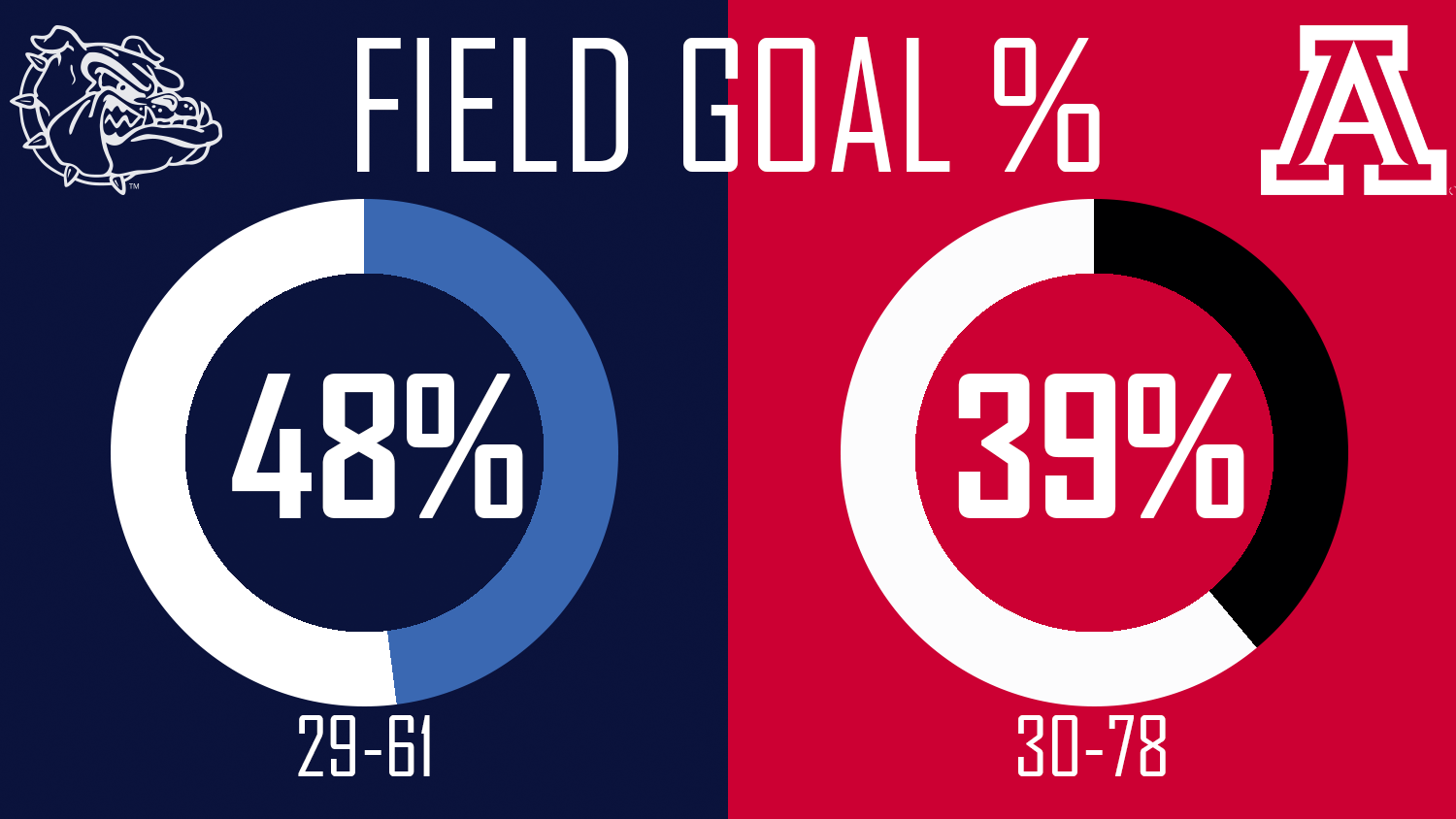 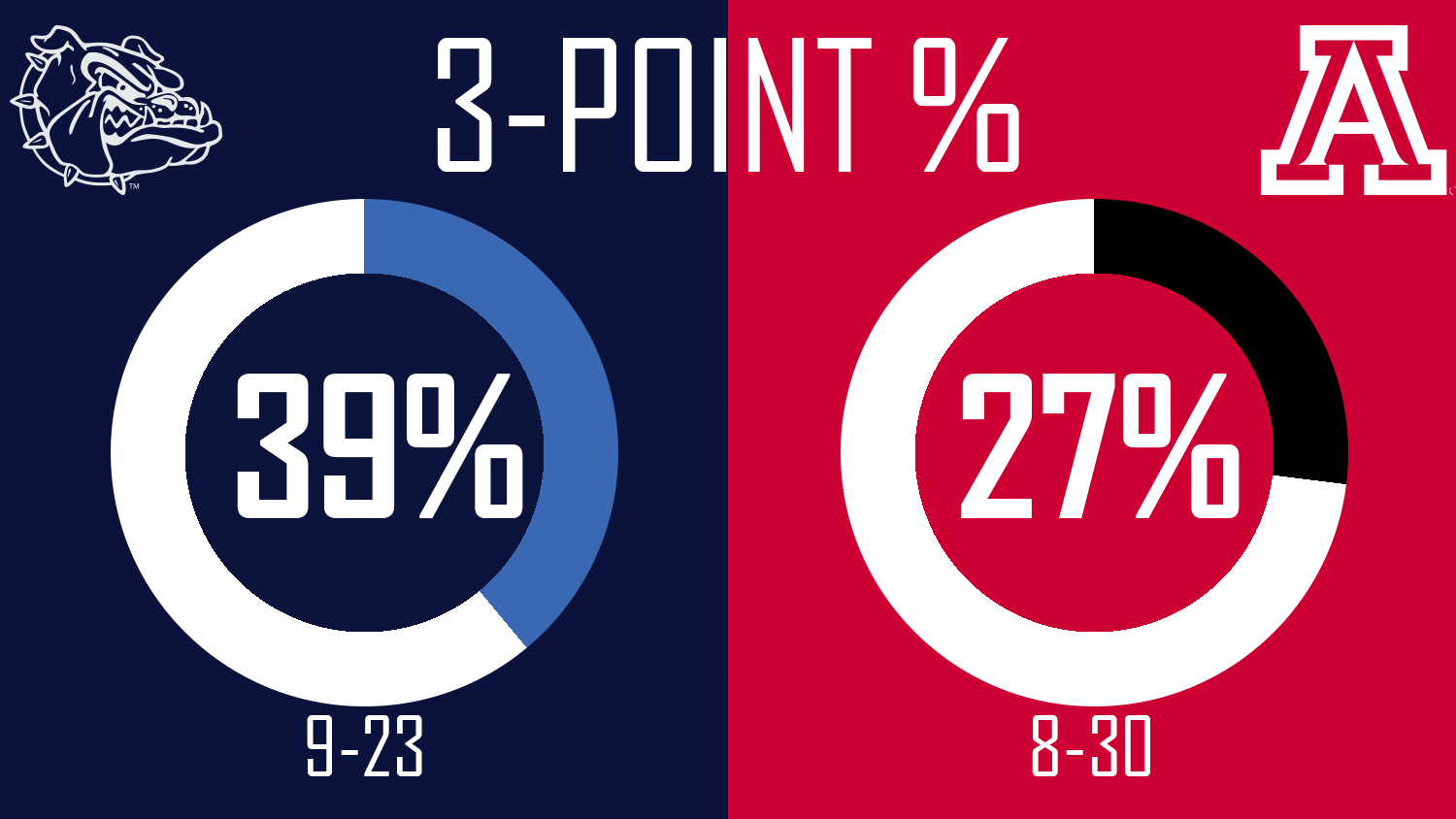 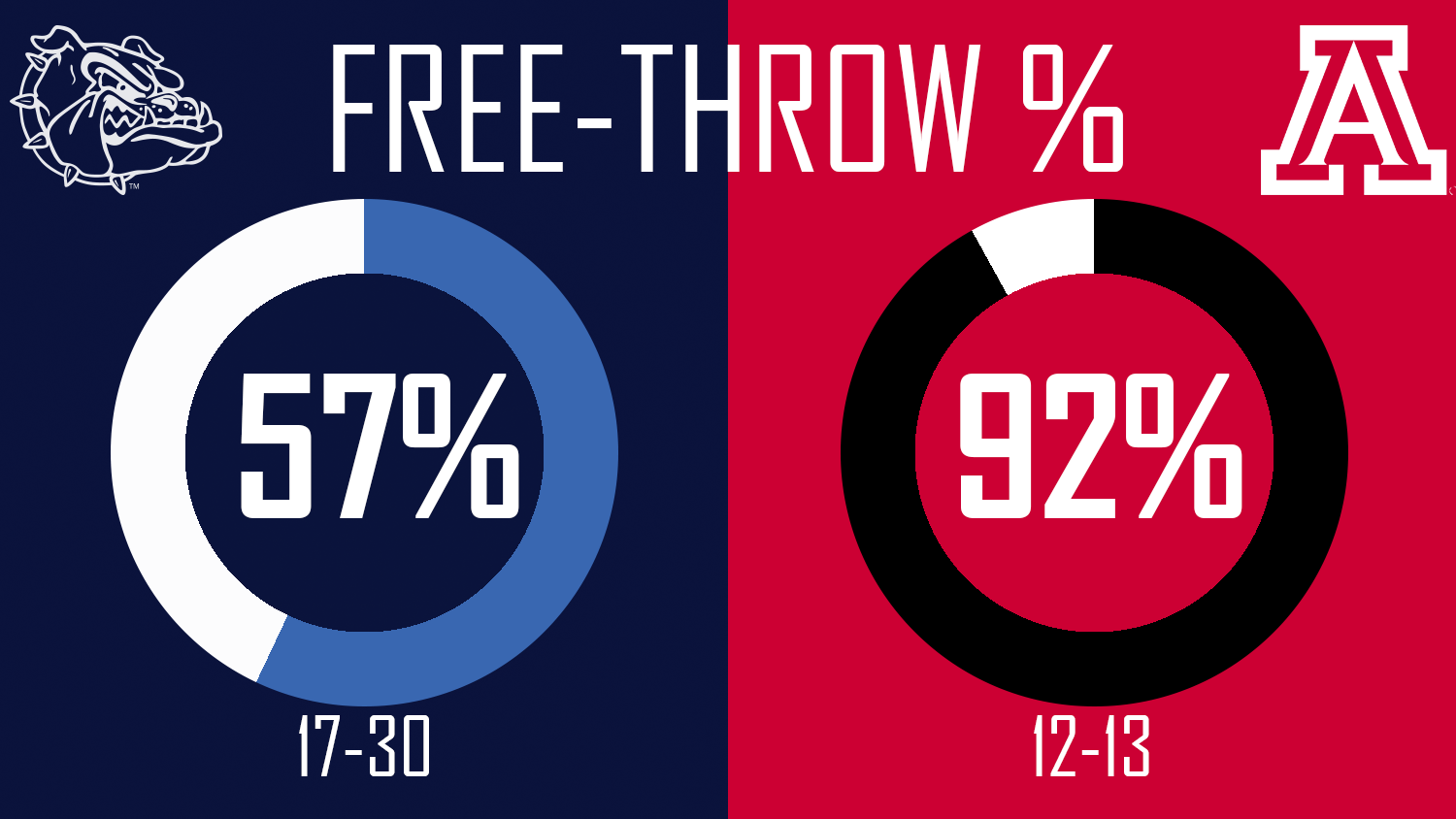 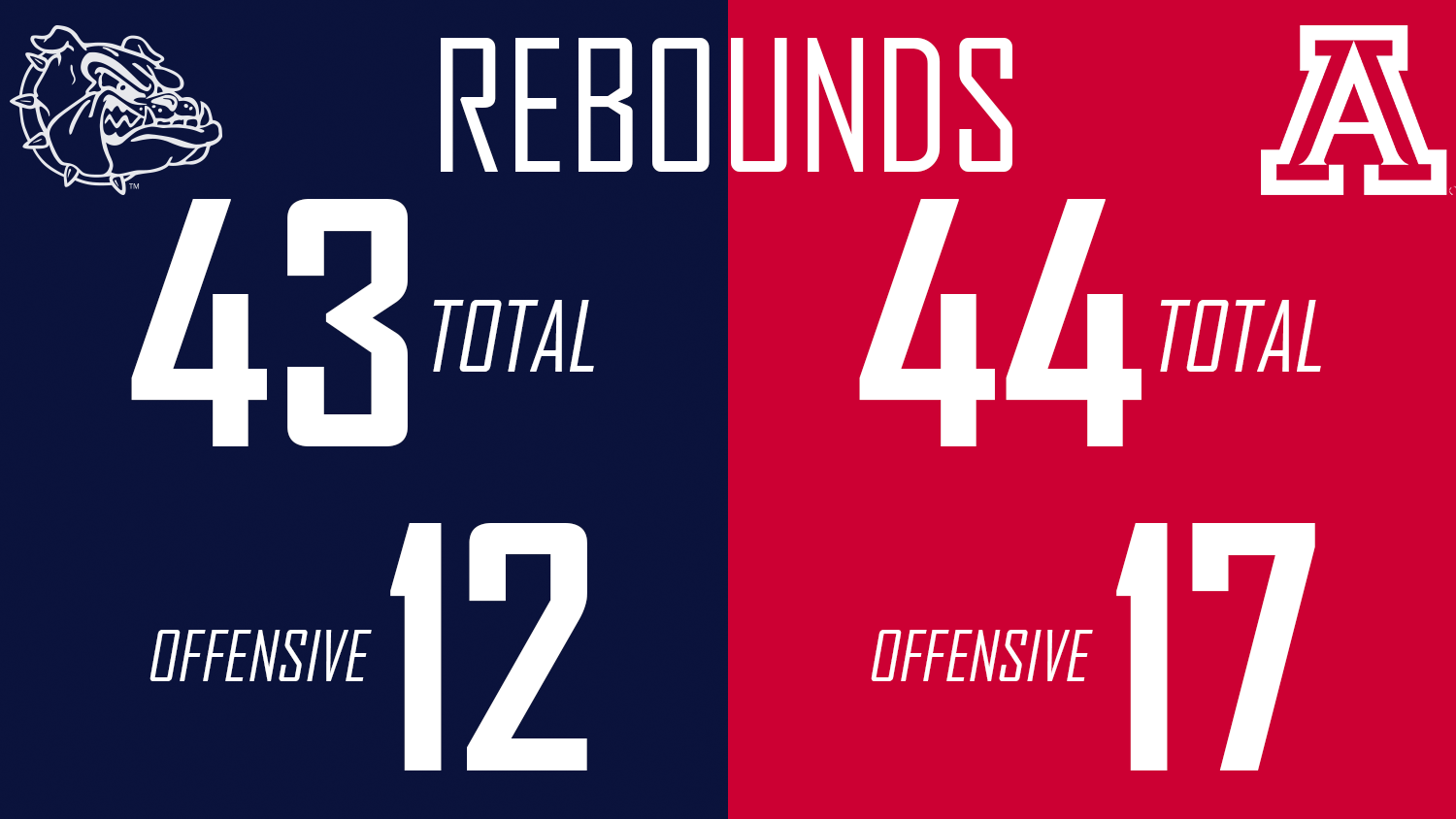 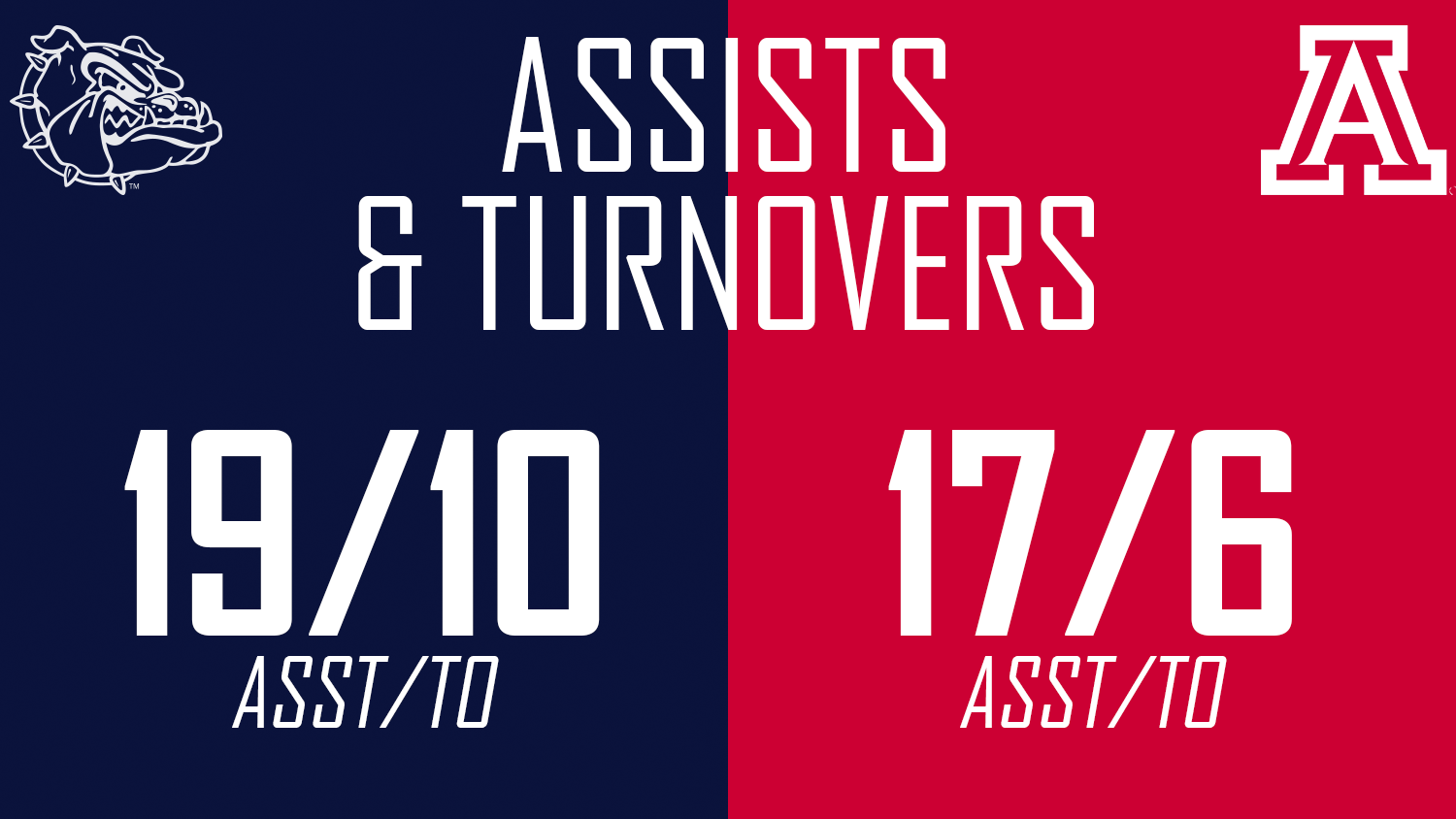 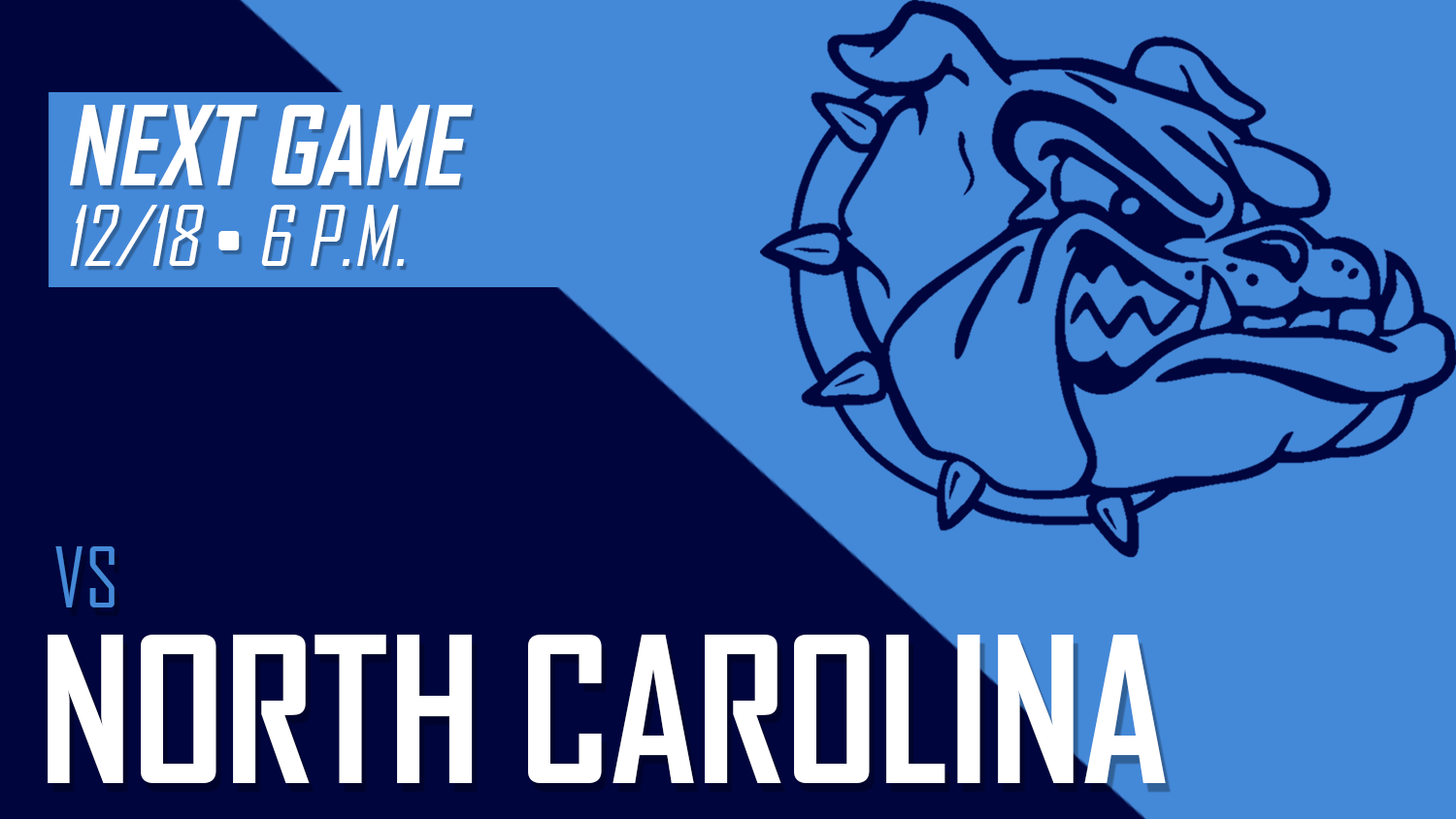 15:42 – Arizona 10, Gonzaga 4: Wildcats forward Zeke Nnaji has four points and two rebounds as Arizona has out-muscled the Bulldogs inside early.

Nnaji, who has only been credited with one offensive rebound, has corralled two Arizona misses in the key and forced two Zags bigs into fouls.

Killian Tillie and Ryan Woolridge each have two points for Gonzaga. Tillie and substitute forward Drew Timme have been charged with GU’s fouls.

11:55 – Arizona 16, Gonzaga 10: Zeke Nnaji is up to eight points in five minutes as Arizona continues to find success in the paint.

Nnaji is 2 of 2 from the floor and 4 of 5 from the line. The forward also has two rebounds.

Guards Joel Ayayi and Ryan Woolridge each have three points for Gonzaga.

Gonzaga is shooting 33.3% from the field.

The Bulldogs got two baskets from Drew Timme sandwiched around a 3-pointer from Admon Gilder.

Nnaji has five offensive rebounds and is 3-of-4 shooting.

Half – Gonzaga 35, Arizona 34: Corey Kispert connects on a 3-pointer with 1:20 left in the half and Gonzaga takes its first lead.

A driving layup by Nico Mannion pulled Arizona back even before Joel Ayayi hit a free throw to get to the halftime score of 35-34.

Arizona has found its most success inside. Josh Green leads the Wildcats with 11 points, but forward Zeke Nnaji has powered UA. Nnaji has 10 points and nine rebounds. He has pulled down five offensive rebounds, while the Wildcats as a team have 12. Arizona leads the rebounding battle 26-22.

Gonzaga took its first lead with 1:20 left in the half on a transition 3 by Kispert. The Zags have 10 fast-break points, UA has 0.

Ayayi continues to lead the Zags with 12 points on 4-of-6 shooting.

Gonzaga is facing foul trouble for the first time this season. Starting forward Killian Tillie has three fouls, Filip Petrusev and Corey Kispert each have two. Substitute forward Drew Timme also has two fouls and Anton Watson has not returned to the game after leaving with an apparent shoulder injury in the first half.

Arizona is 0 for its last 6 shooting and hasn’t scored in 4:27. The Wildcats have three turnovers in that span.

Corey Kispert got hot during the 1-minute, 40-second run and now leads the Zags with 14 points. Admon Gilder is up to 12 points on 4-of-4 shooting from 3-point range.

Green had six points during the run and is up to a team-high 17 in the game.

Gonzaga has four players with double-digit scoring, led by Corey Kispert’s 16 points. Filip Petrusev has 13, and Admon Gilder and Joel Ayayi each have 12.

Final – Gonzaga 84, Arizona 80: Corey Kispert scored 18 points to lead four Bulldogs in double-figures and No. 6 Gonzaga held off No. 15 Arizona at the McKale Center in Tucson, Arizona.

West’s best? Gonzaga has had upper hand lately in Arizona series but is winless in Tucson

The Bulldogs have won the last two matchups after the Wildcats claimed six of the first seven. For the sixth-ranked Zags to continue their recent success, they’ll have to find a way to win inside the McKale Center on Saturday after dropping thrillers on two previous visits. | Read more »

The former Gonzaga standout turned the page on his playing career over the summer. Sacre now assists with fundraising in the athletic department at his alma mater while he completes work on his master’s degree in organizational leadership. | Read more »

After spending much of his professional career overseas, Jeremy Pargo is again stateside with the NBA G-League’s Santa Cruz Warriors and first-year head coach Kris Weems is happy to have the 33-year-old Gonzaga product on board. | Read more »

Fresh off victory over Washington, Gonzaga moves up to No. 6 in AP poll

Gonzaga made a move in the AP Top 25 and in ESPN.com’s latest bracketology. The Zags (10-1) climbed from ninth to sixth in the AP rankings following Sunday’s 83-76 road win over then No. 22 Washington. | Read more »