If you had contrasting styles as the most on-point cliché of the bowl season, you are a winner. Even if only half of the folks who watched Air Force’s 31-21 win over Washington State in Friday’s Cheez-It Bowl could have been satisfied.

And few if any were Cougars fans, who not only had to watch their beloved team lose but also had to listen to one of their own, Ryan Leaf, read the obituary on a 6-7 season.

• If you had asked Leaf back in his Pullman days if he could envision himself calling a Washington State bowl game someday, he probably would have brushed by you en route to the golf course. Or the film room. But be the analyst on WSU’s fifth consecutive bowl appearance? No way.

Leaf, who joined ESPN this year, was lucky to team with his usual partner, veteran play-by-play man Clay Matvick. The two also were lucky to be on a game that featured such a, OK, “contrast in styles.” How so? Check the halftime statistics.

Washington State ran the ball five times before half, Air Force threw it six. WSU had 216 yards, 194 through the air. The Falcons had 214, 202 of them rushing.

The first drives were the game in microcosm, with the Cougars opening the game taking just four plays to travel from their 28-yard line to the Air Force 6. But three plays later, they were still at the 2. Mike Leach, as Leaf predicted, went for the touchdown.

They ran the same play Max Borghi broke for 17 yards early in the drive. He gained none this time.

Air Force took the rest of the quarter to methodically move into Washington State territory before beginning the second quarter with a 1-yard run by quarterback D.J. Hammond III. The drive took 20 plays and 12 minutes, 23 seconds.

• Leach likes to play down the importance of time of possession. Coming out of halftime, sideline reporter Taylor McGregor asked him about Air Force’s edge of 22 minutes to 8.

Leach actually said “time of possession is important,” but then qualified that declarative sentence with its relationship to score and the defense’s inability to make a stop.

“The Palouse Posse isn’t walking through that door,” Leaf said as Air Force began to pull away in the third quarter, referencing possibly the best defense in school history. “Defensively, they have to figure out a way to get a stop because, if they don’t, Washington State, if they are able to score offensively, they are going to have to start kicking onside kicks.”

It never came to that. 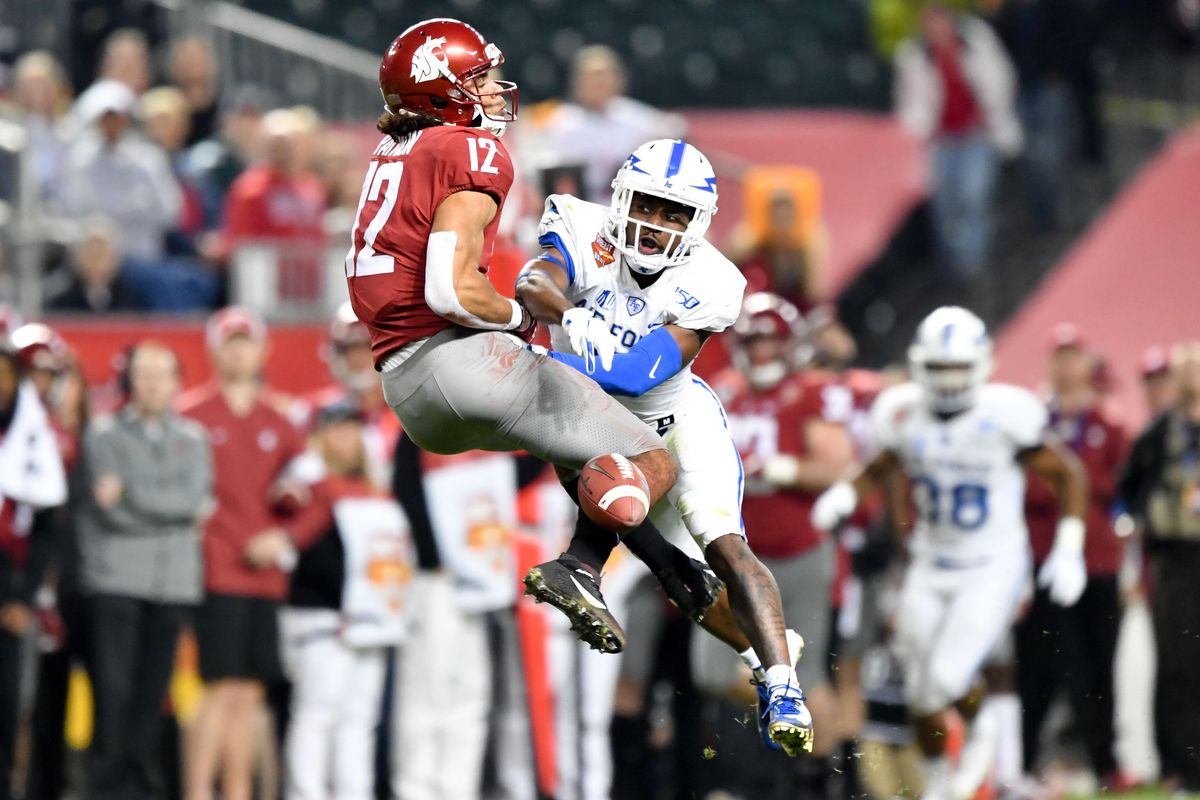 • With all the bowl games that ESPN broadcasts, there is no way the network can have its top talent at every one. It certainly didn’t in this one – at all levels.

There were various misidentifications. There were the occasional garbled sentences. But the most egregious error came right off the bat when Leaf, the Washington State Hall of Famer, dropped the “State” and used “Washington” when describing the Cougars just 2 minutes in.

The slip of the tongue may have been the first, but it wasn’t the only turnover by the ESPN crew. The most visible came after the Cougars scored near the end of the first half. Leaf explained how Tay Martin, who wears No. 1, was able to get free for a 58-yard pass from Gordon.

That may have been topped by a fourth-quarter gaffe, just before WSU scored to cut Air Force’s lead to 24-21, in which neither Leaf nor Matvick knew they were still on the air after a Falcons punt.

When Kadin Remsberg scored the clinching touchdown with a little more than 3 minutes left, the folks at Chase Field saw the replay a couple of times before those watching at home viewed the play.

• Jahad Woods has had some great games – and great plays – in his Washington State career. But nothing in his past compared with his performance in Phoenix.

Woods was all over the field from his weakside linebacker spot. It started on that 20-play drive with which Air Force (11-2) opened the game, making eight tackles.

It continued all night, with the junior finishing with a career-high 20 tackles. That total is eight short of Brian Forde’s school record set in 1985. It’s also the most by a WSU player since 1997.