What we remember – and so does he – is that impossible run of shots 11 months ago, 3-pointer after 3-pointer shimmying through the net and setting off a sequence of roars that surely was heard all the way over on the Las Vegas Strip. Eleven in a row, 13 of 14 in all. His box on the Most Valuable Player ballot for the West Coast Conference Tournament could have been Xed in at halftime of the semifinals with a clear conscience.

This is both the promise and, in a small way, the problem of Killian Tillie as Gonzaga basketball dips its toe into February.

The Bulldogs’ bulldozer rolled on Saturday night, even with the San Diego Toreros putting up considerably more than the token resistance the Zags have otherwise faced in WCC play. Rui Hachimura put on a show for the new and bigger wave of Japanese media that rolled in to track his star, and USD’s Isaiah Pineiro nearly matched him. Zach Norvell Jr. threw in three straight 3s to erase the last traces of intrigue, Brandon Clarke bore down on shot-blocking history and then everyone began preparing for the possibility of higher blood pressure next weekend when San Francisco and Saint Mary’s come to call.

And wondering if that series will mark the return of the Tillie they came to know a year ago.

“That’s what I want to live up to,” he said Saturday night. “It’s been hard, but I’ll get there.”

To this point, there has been no real hurry. Even so, the great anticipation after Gonzaga’s championship run in Maui and the agonizing misses against current No. 1 Tennessee and at North Carolina was what the Zags could be once Tillie and Geno Crandall returned from the injuries that made them spectators for an extended period in the fall.

And now the Zags are about a month out from need-to-be time.

But some things can’t be rushed.

And that especially includes a 6-foot-10, 220-pound basketball hybrid trying to chip off the rust that accumulated during his forced hiatus with a stress fracture in his right ankle.

On Saturday, Tillie checked into his eighth game of the season about 5 minutes in, and about 80 seconds later posted up aggressively on the left block, took a dribble to the middle and then pumped his way into an 8-footer over a tight check.

It was a tough bucket, and one with purpose.

“We have to constantly remind him that there’s so much more to his game than just 3-point shooting,” Gonzaga coach Mark Few said. “That’s what makes him so special.

“I talked to him this week, ‘There’s certain plays we’ll pop you out to the perimeter, but a lot of it you need to get down there and go to work.’ ”

But that was pretty much the evening’s highlight – just four points and a couple of rebounds in 16 minutes, and only five of those in the second half as Few rode hotter hands.

And that’s been pretty typical. Tillie’s numbers are unsurprisingly modest – his scoring about half of what it was a year ago, his shooting percentages down both overall (58 percent to 45) and from 3 (a WCC-leading 48 percent to 30).

“It’s still pretty tough getting back in the rhythm of the game,” Tillie said. “Last year, I finished the season playing pretty good, and I want to do the same things and it’s not coming. But I have to be patient and trust the process.”

But it’s not as if he’s a fifth wheel. Just having him back in the rotation has made an early foul on Hachimura or Clarke not the crisis it was in December, and allowed them to play with freedom.

“And there have been points when it’s been there for him,” assistant coach Brian Michaelson said. “The corner 3 against BYU, the whatever it was – six, eight, 10 points early – in that USF game. He just does so many things. Teams are having to switch his ball screen now, which is a huge advantage for us. We hadn’t seen that in games until he came back.” 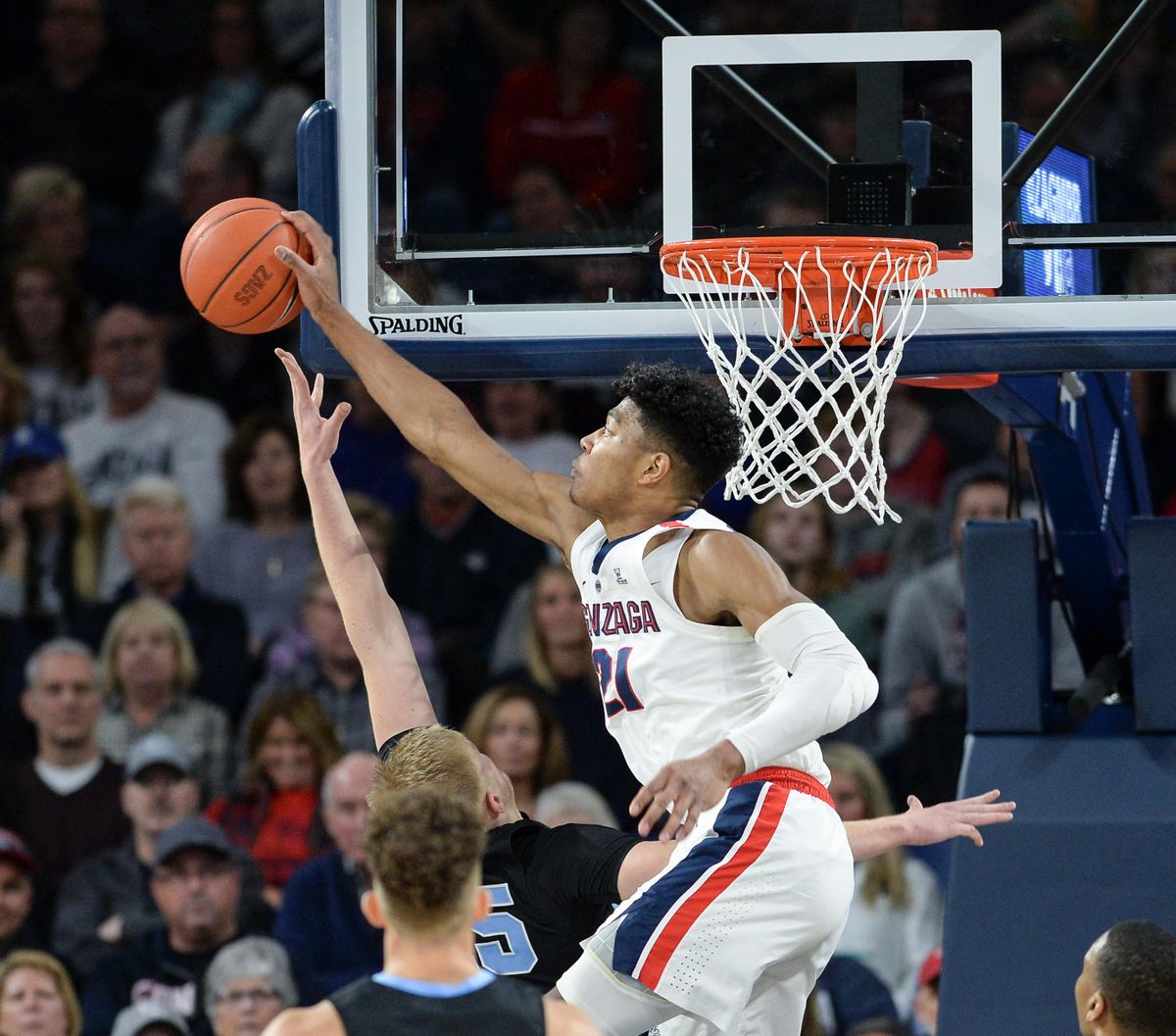 Defense, too, has been problematic – though Few noted, “he’s been a victim of some really tough, even fluky calls – even one tonight. I don’t know if that’s because they view him as a guy coming off the bench or what.”

But it has to be remembered, too, that Tillie wasn’t just down for November and December. The hip and oblique injury that kept him out of Gonzaga’s Sweet 16 loss to Florida State last March required recovery through the spring and summer. Important sharpening time went to rehab instead.

And now he’s a runner without a mileage base racing himself back into shape – for a small window of opportunity.

“He’ll get there,” teammate Josh Perkins insisted. “He knows who he is – and who he used to be.”