Art and pieces of Spokane history locked in two safes would have been buried in a pile of rubble if not for a discovery by Spokane firefighters.

The firefighters were doing a week of training exercises in the former YWCA that will soon be demolished on the north bank of Spokane Falls when they found a 5-foot-tall safe, Deputy Fire Chief Rex Strickland said.

Firefighters used several tools, including the hydraulic Jaws of Life . The tool, normally used to open vehicles with people trapped inside, can create an opening large enough for a person to climb through.

Spokane firefighters recovered dozens of engraved, silver dishes, pottery by a renowned local artist Dorothy Fowler and a 58-year-old check for $2 when they opened the safe. 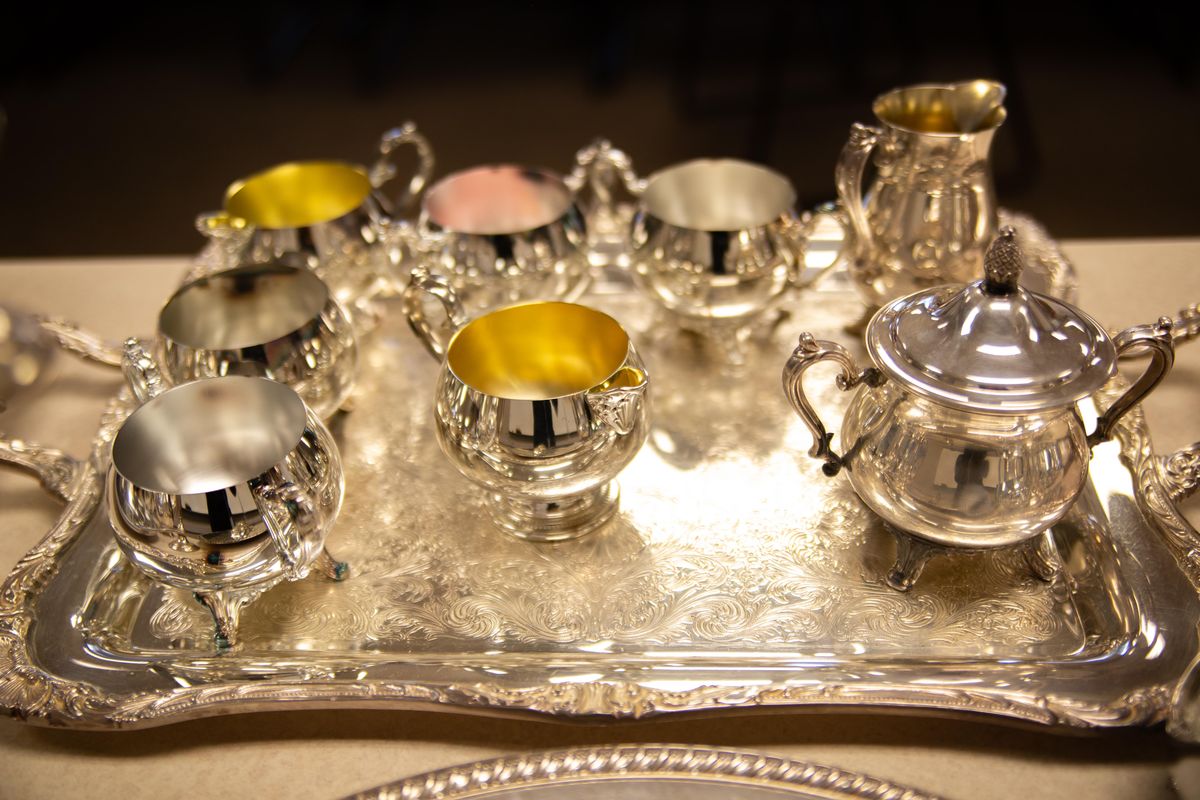 A silver tea set is seen on a platter on Feb. 5, 2019 at Spokane Fire Department Station No. 4. The items were recently recovered from a 5-foot by 4-foot safe during SFD’s tactical training at the old YWCA building on 829 W. Broadway Ave. (Libby Kamrowski / The Spokesman-Review)

The fire department pried opened the smaller safe in front of YWCA CEO Regina Malveaux and a group of reporters Tuesday afternoon, and found a metal box containing a $2 check for day care and a few envelopes with the Rainier beer logo inside.

The YWCA purchased the Broadway Avenue Building in 1963 and moved to their current location in 2010. Before the YWCA occupied the building, several breweries operated there, including Spokane, Sick’s and Rainier Breweries.

The current owner, Larry Stone, purchased the 128-year-old building in 2010. He plans to demolish the structure and build a $60 million tower, The Falls, which will house condos, offices, apartments, retail space and underground parking.

Malveaux said the items in the safe belong to the owner of the building, but she hopes Stone will donate them to the Northwest Museum of Arts and Culture. She said many of the silver dishes found in the safe are engraved with former YWCA board members’ names. Additonally, the pottery had Fowler’s name carved into it.

Fowler, who first took a pottery class at the YWCA in the ‘70s, went on to sculpt the statue of Spokane astronaut Michael P. Anderson beside the First Interstate Center for the Arts and Convention Center and crafted the bronze faces covering the door of Our Lady of Lourdes Cathedral in downtown Spokane. She died in 2015.

Strickland and YWCA spokeswoman Erica Schreiber said they weren’t sure how much the items are worth, but they do hold sentimental value to the organization.

Malveaux said the YWCA celebrated its 115th anniversary recently and she was extremely excited when the Fire Department told her they had items from the organization’s past. She said she recognized a few of the women’s names engraved into the silver pieces that were probably 50 to 70 years old.

“What’s so special is it affirms there’s always been women who were passionate about the YWCA,” she said.