All childbirth is painful, but the physical pain is often overtaken by the sheer joy of welcoming a child into the world.

Sadly, for the 24,000 families in the U.S. each year who experience stillbirth, the pain of childbirth is overshadowed by the immeasurable sorrow of loss.

Gretchen and Josh Cleveland know that agony all too well, yet out of their grief, they’ve been able to give a gift that will help other local families facing such pain..

The Clevelands met at Whitworth University in 1997 when Gretchen lived in a residence hall on the floor above Josh.

It was hardly love at first sight.

“She’d come down and tell us to turn our music down,” Josh recalled.

They graduated and moved on with their lives. Gretchen worked in Seattle while Josh attended Princeton.

“Six years later, he popped into my eHarmony profile as a match,” said Gretchen, laughing. “I turned him into my dating coach.”

It was a position that didn’t last long. They started dating in 2008 and in July 2009, they married, starting their married life back where they first met – in a residence hall at Whitworth.

Josh now works for the university in alumni/parent relations, and Gretchen is assistant to the provost.

Starting a family was important to both of them – they joked about having nine children. After a year of marriage, they started trying to conceive. When that failed, they made an appointment with a reproductive endocrinologist and eventually decided to pursue IVF.

In August 2013, Gretchen gave birth to a baby girl, and they were overjoyed. When their daughter was 3 1/2, they decided to try IVF again. It worked, and they eagerly anticipated a second child due July 2017.

“It was a great pregnancy,” Gretchen said. “We found out it was a girl and our daughter was over-the-moon at the thought of being a big sister.”

Just shy of 37 weeks, Gretchen went in for an ultrasound, and she and Josh marveled at the beautiful girl with dark curls like a halo that floated before them on the imaging screen.

“She has smoochable cheeks!” their preschooler said, enthused.

Evenings were Josh’s time with his unborn daughter. That Sunday night at 9 p.m., he rubbed Gretchen’s belly and sang to their baby. She bumped and thumped under his hands.

The next morning Gretchen awoke, surprised she’d slept thru the night. On the drive to work, the baby didn’t kick as she usually did, and Gretchen mentioned it to Josh.

By midmorning, she was concerned enough to call the clinic. She was advised to eat a sugary snack, lie down and count the baby’s kicks.

Josh brought her a root beer and a candy bar, but she didn’t feel any movement after her snack. The nurse at the clinic didn’t seem alarmed – just told her to pack a bag and check into labor and delivery at Providence Sacred Heart where they’d monitor the baby. 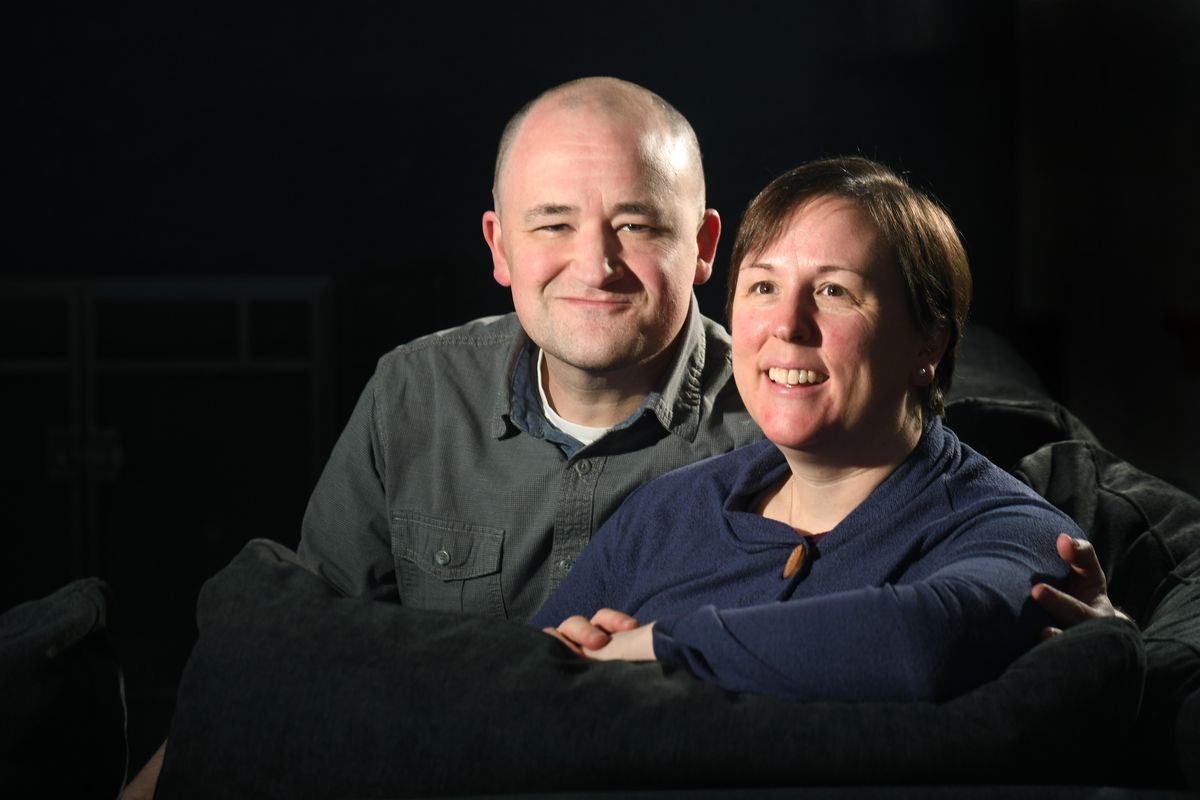 Following the stillbirth of their daughter Alma at Sacred Heart in July 2017, Josh and Gretchen Cleveland were able to use a CuddleCot. A CuddleCot is a cooling device that preserves a stillborn baby’s body in a bassinet or crib so that he or she can remain up to five days in a hospital room, extending the time a family has to photograph the infant, sing to it, take its measurements or show it to loved ones. (Dan Pelle / The Spokesman-Review)

So, they made arrangements for their preschooler and drove to the hospital. The nurse ran a Doppler over Gretchen’s belly, searching for the familiar shushing sound of the baby’s heartbeat. There was only silence.

“Let’s get the resident in and do an ultrasound,” the nurse said, calmly.

An ultrasound machine was wheeled to Gretchen’s bedside. Minutes later, the resident said, “I’m so sorry, I can’t find a heartbeat.”

In that instant, the Cleveland’s world turned upside down.

“I let out the most primal scream,” Gretchen recalled.

Staff gave the couple time to cry and mourn and to call their family to let them know. Then they had to move to a different room. A nurse brought in a wheelchair for Gretchen. She refused to use it.

“Don’t make me feel weak when you just told me I’m going to have to give birth to my dead child,” she said.

A Caesarean section was scheduled for that night. Friends brought the Cleveland’s daughter to the hospital where Josh told her the baby had died.

“Am I still a big sister?” she asked, through her tears.

At their older daughter’s birth, the room was filled with shouts of jubilation – this time there was only silence.

“She was just beautiful,” said Josh. “We named her Alma, which means pure, nurturing soul.”

Like many families, the Clevelands were given no reason for Alma’s death – “unexplained term stillbirth” is what they were told.

They held Alma and kissed her, and thanks to a fairly recent invention, they had all the time they needed to say hello and to say goodbye.

They were given the option of using a CuddleCot – a cooling pad that is inserted into any type of baby bed to allow the families of babies who have died time to grieve. This device is important because often stillborn babies have started to decompose, and once delivered, the process quickly continues. Keeping the baby cool allows families have more time with their child – and more importantly, they can keep the baby in the room with them.

That was vital for the Clevelands.

“We’re missing a lifetime, so we were going to spend as much time with her as possible,” Gretchen said.

Alma’s grandparents and her big sister got to cuddle her, sing to her and tell her goodbye.

“All these things made possible because of the CuddleCot,” Josh said.

After 24 hours with Alma, they let her go and faced the unimaginable task of making funeral arrangements for their child.

Any parent who has lost a child will tell you there is no “getting over it.”

The Clevelands found bereavement support groups and took comfort in their older daughter. They visit Alma’s grave weekly, and a painting hangs in their living room – a painting depicting a mother, a father and two daughters.

“It’s the family we were supposed to be,” said Gretchen.

At the one-year anniversary of Alma’s delivery, Josh started thinking about the CuddleCot and what it had meant to them.

“We were so grateful to have been given the option,” he said. And he wondered if all area hospitals had them.

Kootenai Health got a CuddleCot two years ago. At a cost of $3,000, the cots aren’t cheap.

“One of our former patients who suffered this loss, raised the funds to purchase one through the Kootenai Health Foundation,” said Whitney Phillips, an OB clinical coordinator at the hospital. “It allows families to keep their baby at the bedside and make some memories.”

Providence Sacred Heart and Holy Family hospitals purchased two CuddleCots through funds from the Providence Healthcare Foundation Kids at Heart event, said Carolyn Ringo, an RN who works with the hospital’s Forget Me Not program.

“It’s so important for families to spend time with their babies,” Ringo said. “Sometimes a mom can be really sick after delivery and not be able to see their child right away. The CuddleCot extends the time a family can spend with their child. It gives them some peace, and that is such a gift.”

When Josh discovered MultiCare Deaconess didn’t have a CuddleCot, he reached out to Carolyn Kadyk, executive director of the MultiCare Inland Northwest Foundation.

“Our clinical partners were very aware of the CuddleCot and had also expressed the need for bereavement support and training,” Kadyk said. “We created a special link for the Clevelands, and they sent it out to their friends and family to fund raise.”

Meanwhile, another family had experienced a stillbirth at MultiCare Valley hospital and had donated a CuddleCot to that facility.

With the Cleveland’s permission, their fundraising link was shared on MultiCare social media sites and the funds flowed in.

“People we know from across the country and from this community saw the value, rallied and gave,” Josh said.

Their $3,000 goal was quickly surpassed. Kadyk asked the family if they’d be willing to keep the fundraising link active to provide bereavement support and training for the hospitals’ clinical staff. The Clevelands agreed.

“Thirty nurses from Deaconess and Valley are scheduled to take the training,” Kadyk said. “We’ve continued to fund raise. Our goal is that every labor and delivery nurse be able to take this training. It’s incredible how all the pieces came together. We’ve been so blessed to be part of this.”

And the CuddleCot? That was dedicated in Alma’s memory in November at Deaconess.

“The Clevelands went through an unimaginably hard thing. Then they took their pain and did something to help the greater community,” Kadyk said.

At the dedication ceremony, Gretchen looked at the cot that features a plaque etched with Alma’s name.

“I hope this is your least-used piece of equipment,” she said. “But I’m so glad it’s here if needed.”