SAN DIEGO – For the second straight game, Gonzaga was limited to a season-low point total in the first half. That’s not a good trend this late in the season.

But for the second straight game, the Zags flipped the switch in the second half, and this time they didn’t wait nearly as long.

No. 3 Gonzaga dialed up its defense, which triggered its offense and ultimately a 79-67 victory Saturday night over San Diego in front of a packed crowd of 5,132 at the Jenny Craig Pavilion, roughly 35 percent clad in GU gear.

On this two-game road trip, the Zags have had extended stretches where they weren’t the aggressors and their potent offense ground to a halt. They needed a closing burst in the final five minutes to topple Loyola Marymount on Thursday night.

The first 20-plus minutes against the Toreros (16-11, 5-7 WCC) was a virtual replay, with the score knotted at 37 early in the second half. The momentum changed when Gonzaga registered three defensive stops in a row.

It took only 85 seconds for the Zags to hit four field goals and take a 45-37 lead. Roughly the same scenario unfolded minutes later, when Gonzaga bumped its lead to 67-52 with 8:30 remaining.

“The key was getting stops, so we could get out and run and we didn’t have to constantly grind it against their half-court defense,” said coach Mark Few, whose team improved to 25-2, 12-0 in conference. “If you’re taking the ball out of the net, you can’t run. When we get stops, this team runs as good as any we’ve had.”

Following the theme of the night, Josh Perkins had a big second half with 11 of his 15 points and eight of his nine assists. Zach Norvell Jr. dropped 14 of his 18 points in the closing half. Rui Hachimura scored 16 of his game-high 22 in the final 20 minutes.

Yes, Bill Walton is enamored with just about everyone who has ever played college basketball, but he seems especially smitten with Gonzaga’s Rui Hachimura and Brandon Clarke. | Read more »

“We knew our defense could get our pace better on offense,” Norvell said. “I said that last game, too.”

Hachimura had too much power and speed for USD’s bigs, but it took a while for him to show it.

“He started playing harder and being more assertive and not settling,” Few said. “He’s really good when he does that.”

The Zags did a much better job defensively on Isaiah Pineiro, who struck for 30 points in the first meeting, won by Gonzaga 85-69 two weeks ago.

Brandon Clarke was the primary defender, instead of Hachimura, on Pineiro in the rematch. Clarke kept Pineiro in check when he wasn’t stuck on the bench in foul trouble.

Pineiro found his rhythm late, scoring 11 of his 20 points in the final six minutes, but the Zags’ lead never dropped below eight points.

“Low-possession game, defense matters,” said Perkins, who is seven assists from tying Matt Santangelo at the top of the program’s career list. “We dug deep, tried to turn it up a little bit, get out and get some easy ones and get our confidence going.” 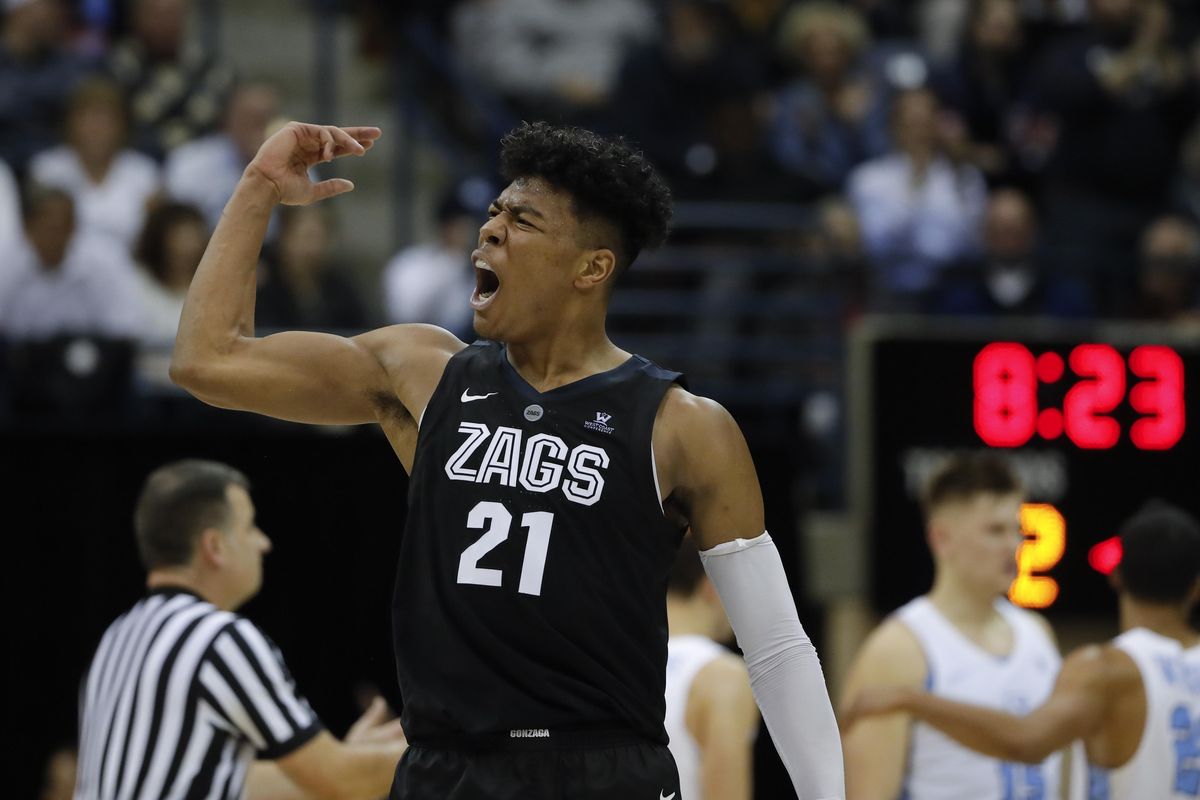 San Diego guard Olin Carter III, sidelined in the first meeting with an abdominal injury, picked up right where he left off after scoring 42 points in two games against Gonzaga last year.

Carter hit a pair of 3-pointers and scored 12 points in the first half. Gonzaga slowed Carter in the second half with Norvell doing most of the work, along with some help from GU’s switching defense. Carter attempted just two shots in 19 second-half minutes.

“Credit to my guys being able to handle switches,” Norvell said. “I just wanted to have him take tough looks. A guy like that, you want to get him uncomfortable and hope for a miss.”

The Zags led nearly the whole way, stretching their advantage to 20-12 on Clarke’s tip-in.

Gonzaga had an opportunity to extend the lead when Pineiro picked up his third foul with 6:25 left in the first half. It didn’t happen. Clarke was whistled for his second foul and sat out the rest of the half. The Zags’ offense went cold, missing seven straight shots before Hachimura’s layup ended a 5-minute dry spell.

Carter banked in 3-pointer, tying the score at 30 at the half.

The second half belonged to the Zags, who made 69 percent of their shots and scored 49 points.

“We came back with good energy in second half from the beginning,” Hachimura said. “We had good defense and we finished the game.”