Given how the teams had been playing of late, payback seemed inevitable.

In the four weeks since dropping a two-point game at BYU, the Gonzaga women had pulled themselves together and regained the high ground in the West Coast Conference standings, the national rankings and every other barometer of success.

Meanwhile, BYU had dropped three out of five, its one shining moment seemingly consigned to irrelevance.

Two days after eking out a one-point win at ninth-place Portland, the Cougars again saved their best for Gonzaga, beating the No. 13 Zags 66-64 in front of a sellout crowd of 6,000 at the McCarthey Athletic Center.

It came in the paint, courtesy of 6-foot-7 post Sara Hamson but mostly from BYU’s uncanny outside shooting in the first half: 10 for 15.

Down by double digits for much of the game, the Zags clawed back to tie and had two chances to go ahead in the final 20 seconds, but both shots were blocked by Hamson.

Then, with the game seemingly headed for overtime at 64-all, GU forward Zykera Rice was whistled for running through a screen – 20 feet away from the ball – with 2.2 seconds left.

“We’re hoping to see them again,” said guard Jill Townsend, whose potential winner with 6 seconds left was rejected by Hamson.

Another chance at payback, if it comes at all, would come in the WCC Tournament in Las Vegas.

In the meantime, there’s work to do ahead of Thursday’s game at Santa Clara.

The Zags are still 23-3 overall and a game up in the standings with four to play, but coach Lisa Fortier had much to lament in the postgame interview.

The biggest was having “to listen to them celebrate instead of us for a second time,” but close behind was what Fortier called an “atrocious” 3-point defense. 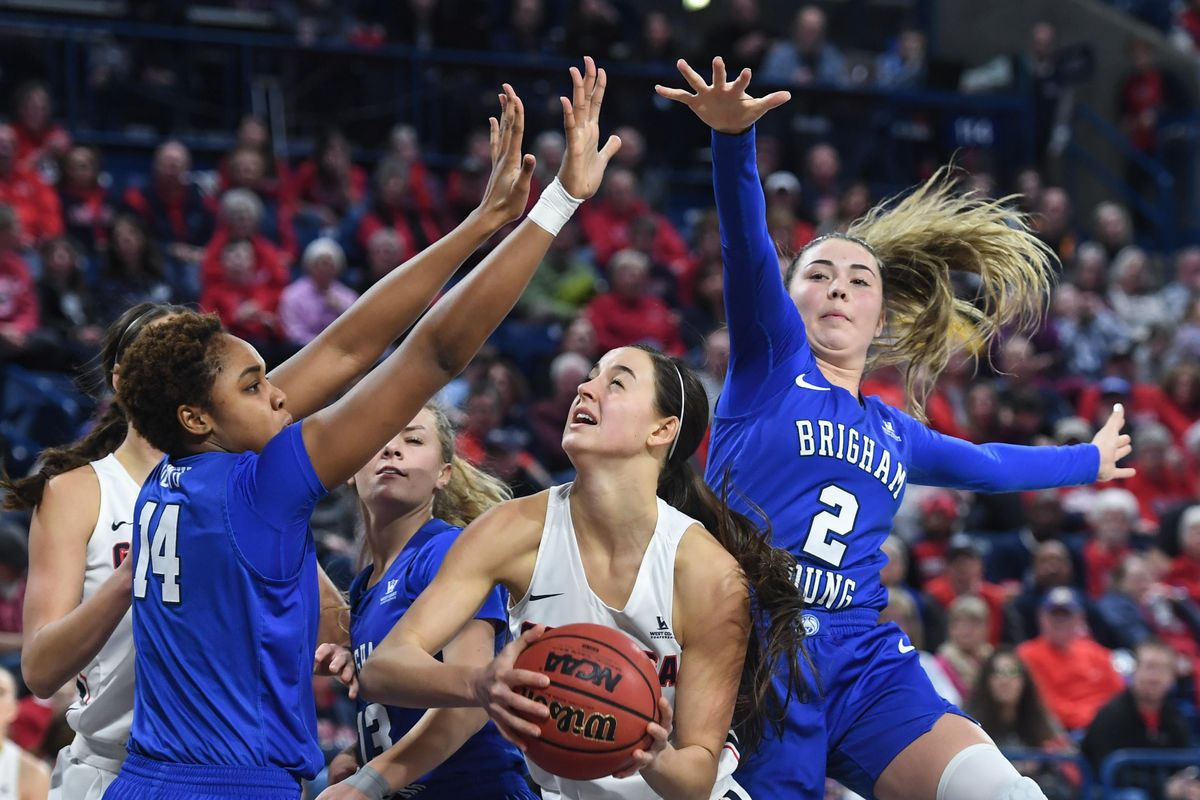 In their last meeting, BYU was 5 for 21 from beyond the arc. This time, the Cougar guards hit six of their first eight for a 24-13 lead after the first quarter.

“We were supposed to make them drive,” Fortier said of BYU guards Brenna Chase and Shaylee Gonzales, who combined for 33 points.

It was the same story at the other end of the court, where Hamson not only altered shots but seemingly the minds of GU players.

GU forward Zykera Rice finished with a game-high 20 points, but was just 6 for 15 from the field. Fellow starter LeeAnne Wirth was 2 for 8.

“It’s not what she (Hamson) does, it’s what she could do,” Fortier said. “I don’t know that we were shying away from her, but one of the things we do is that we’re strong. We’ll go through anybody, but she’s different.”

Turning to the press, GU was down only 43-36 at halftime.

As the Zags warmed up for the second half, the speakers blared out Pat Benatar’s “Hit Me With Your Best Shot.”

Whether or not the song was calculated to inspire, it almost worked: BYU made just two 3-pointers in the second half.

But the Cougars (20-6, 12-3) didn’t implode. They carried that seven-point lead into the fourth quarter and were still up by six with 5 1/2 minutes left.

The Zags missed two more shots on their next possession, but Townsend tied the game at 64. Laura Stockton stole the ball at midcourt to set up Jessie Loera for a jumper, but Hamson was there for the block.