A chain-link fence, a few evergreens and rock formations are all that separate Finch Arboretum parkgoers from the roar of commuters and semitrucks on Interstate 90.

Reducing noise is one of several potential changes included in the Spokane Parks and Recreation Department’s master plan to improve the arboretum over the next few years. Those plans could include a new habitat collection featuring plants from across the Inland Northwest, improved signage, an easier-to-navigate trail system and a new entrance.

City Landscape Architect Nick Hamad said the public would start seeing changes to the arboretum a few at a time, starting this year. The 56-acre site has been owned by the city for more than a century, and has been a developed park for about 70 years. The most recent updates were the creation of a riparian zone around Garden Springs Creek, the expansion of a parking lot and renovation of the Woodland Center, which sits at the park entrance.

“The Finch Arboretum is big enough that a full-on renovation of the whole thing isn’t something we can afford to do,” he said. “That’s why you see the small projects, year after year, and that’s what this plan will help us do.”

Hamad said it was too early to estimate what the Finch Arboretum improvements will cost altogether, but they will likely be paid for over several years with grants, donations and park funds.

Hamad said the master plan was more of a “wish list” than a concrete plan and the projects included would be started or modified based on both user feedback and funding availability. 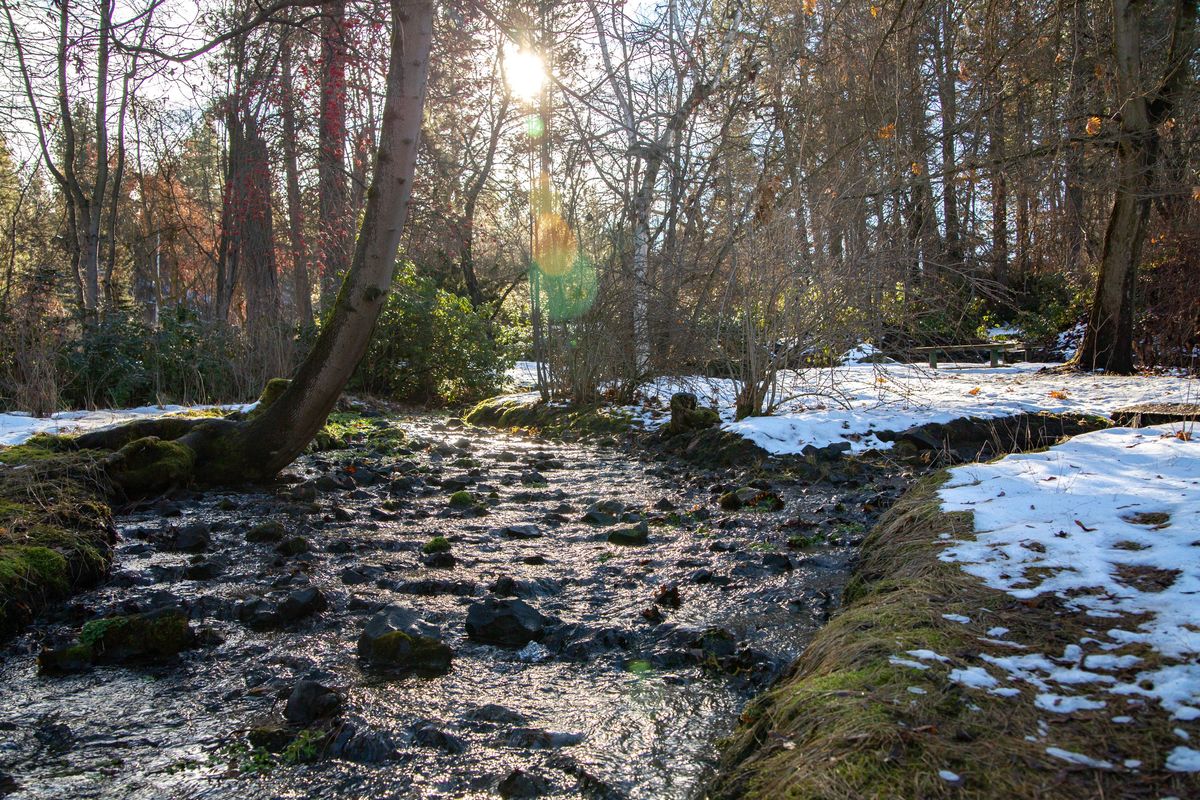 A stream winds through Corey Glen on Dec. 30, 2018 at Finch Arboretum. Plans to maintain and enhance the area focus on everything from soil conditions, to pruning shrubs to making clearer walking paths. (Libby Kamrowski / The Spokesman-Review)

In providing feedback for possible improvements, arboretum stakeholders and visitors have said the sound issue was one of the top priorities the parks department should address as part of its improvements. However, it could be the most challenging as well – blocking the traffic noise from I-90 could cost more than all of the other updates put together, according to Hamad.

The department could plant trees along the southern boundary of the park to reduce traffic noise or work with the Washington State Department of Transportation to build a sound wall. Sound barriers cost about $3.9 million a mile to build, but costs may be higher in urban areas, according to the DOT.

Barriers can reduce noise by about 50 percent in areas directly behind them, but if a person is more than 500 feet away, the difference is negligible. WSDOT sometimes covers the cost of sound walls, and Hamad said they are beginning conversations with the agency, but building a noise barrier could be years away.

Jason Morse, the principal landscape architect for AHBL Inc., the firm that worked with a group of local stakeholders to create the master plan for the arboretum, said the planned changes won’t alter the character of the park, but instead make the most popular areas like Corey Glen more accessible.

He said many of the respondents to an AHBL survey said they had difficulties finding their way around or even to the entrance. One of the biggest changes, a pathway, would help parkgoers find their favorite areas and also make the entire site more accessible for people with disabilities. He said the main pathway will be paved, about as wide as a vehicle, and will connect to the new entrance.

The new entrance will be a footpath off Sunset Boulevard at the end of the park. He said many runners and pedestrians have entered through that area for years and a clearly marked pathway would create a new, easier way to find entrance for people on foot.

Hamad said the pathway and other developments may reduce illegal camping and drinking in the park, as they would increase foot traffic throughout the entire site, instead of just near the entrance or the popular areas.

Now that the arboretum has an existing plan, the city can begin applying for grants to fund the renovations. Fianna Dickson, parks spokeswoman, said many of the grants or donations are matched by the department. One example is a $100,000 donation the city received to build a trail in honor of Susie Stephens, a biking and pedestrian advocate from Spokane who was killed in a crosswalk in St. Louis in 2002. The city will match the donation and the trail will connect the arboretum with Fish Lake Trail.

Hamad said the city intends to continue restoring the creek that runs through the park and enhance Corey Glen, and also will add a new habitat area a short walk away from the parking lot entrance of the arboretum.

Morse said AHBL considered several layouts for the Inland Northwest collection, but decided to build them along the new pathway so visitors could experience them one at a time while they walk deeper into the park. Most of the plants in the park are organized by type, but the new habitats would include trees, shrubs, grasses and flowers to create five habitats.

According to the master plan, the habitats would include the Idaho Mountain Border Subalpine Forest, the Idaho Fourth of July Pass Inland Northwest Forest, the Ponderosa Pine Woodlands of Spokane, the Palouse Steppe of Washtucna, and the Riparian Woodland of Walla Walla.

Amanda Parrish, a member of the arboretum’s stakeholder group and the Lands Council, said the new habitats could be classroom activities, but could also be educational for any parkgoer who is interested in learning about area habitats without having to drive across two states to see them in person.

She said the habitat collection will include dozens of plant varieties and is intended to mimic the biodiversity of the region.

“The Inland Northwest has such an interesting succession of ecosystems and most people experience it just from I-90,” she said.