The Pacific Tigers seemed to have one goal Thursday night – and it may not have been to come home with a win.

It seemed not getting run out of the McCarthey Athletic Center was even more important. They accomplished that, even in a 31-point loss.

It was a different way to play, and the viewers were treated with a different outlook about how it unfolded, with ESPN2 carrying the contest.

The network sent Eric Rothman and Caron Butler, two faces, and voices, familiar to Gonzaga fans. And their fresh perspective was worth staying with, even as the game got out of hand.

The final was 67-36 Gonzaga, with the Bulldogs’ total almost 30 points less than their season average.

• Conference play features a variety of styles and Pacific featured one the fifth-ranked Bulldogs (15-2, 2-0 in West Coast Conference play) haven’t seen much this season. The Tigers (10-8, 0-3) tried to limit possessions with a methodical approach.

But the Zags’ defense made it moot. Not only did GU force 22 Pacific turnovers, it also limited the Tigers to less than 30-percent shooting. The Bulldogs’ defense was on point, not only in limiting Pacific’s attempts, but also keying their offense.

“It just seems like every time Pacific tries to go inside, there’s great help-side defense,” Rothman said. “There’s guys closing out gaps, there’s forwards sliding over building a wall. It has to be discouraging.”

• Brandon Clarke had, officially, five blocked shots to go with his 10 points and eight rebounds. But he had another block taken away by veteran official Bob Staffen.

Jahlil Tripp’s high-arching runner in the second half seemed out of Clarke’s reach. It wasn’t, though Staffen thought so and called goaltending.

As the replay ran, Butler asked his partner, “You know what you call that, E?”

“That’s a block,” said Rothman, as the replay showed the ball was still going up even though Clarke was a couple of feet above the rim. “That’s a clean block.”

• Zach Norvell had 11 points, all of them in the first half. In fact, he and Perkins combined for 20 of the Zags’ first 30 points.

But Butler was right as he credited Norvell’s early 3-point shooting as a key to Gonzaga’s success, allowing the Bulldogs space to operate inside off the dribble. 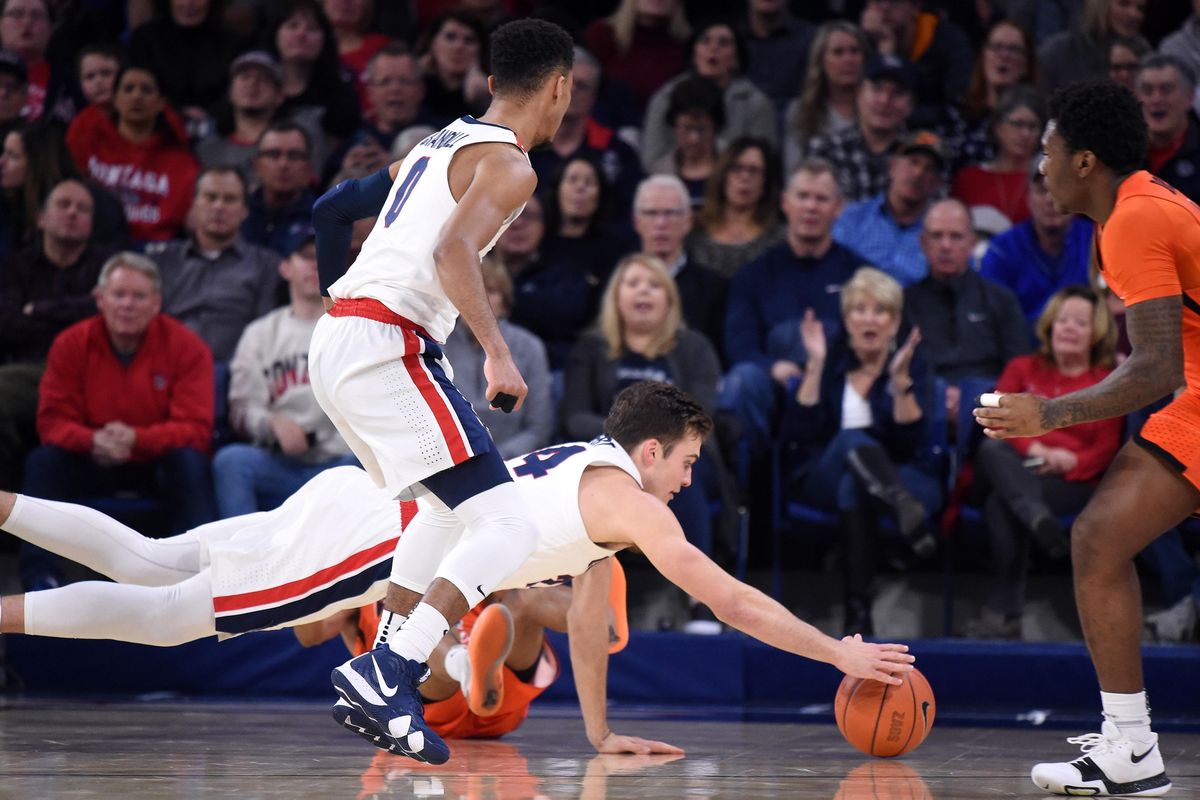 Gonzaga forward Corey Kispert (24) dives for a loose ball during the first half of a college basketball game, Thurs., Jan. 10, 2019, at the McCarthey Athletic Center. (Colin Mulvany / The Spokesman-Review)

• The Tigers’ slow-it-down-and-defend-like-crazy strategy seems a bit out of character from Damon Stoudamire, who was a push-it-up guard at Arizona and in the NBA.

But it’s been the lifelong viewpoint of Tigers assistant Leonard Perry, the former Idaho player and coach. The first 8 minutes of the game were to Pacific’s liking and the Tigers had a chance to take the lead with a free throw after the second media timeout of the opening half.

That was then. By the next media stoppage, Gonzaga had built an eight-point lead.

Pacific’s strategy of dribble handoffs out front before initiating its offense kept the pace to its liking. For a stretch.

“Before that timeout, I felt the flow of the game and the pace was favoring Pacific,” Butler said, “but since then…”

He went into the Tigers’ problems, including turnovers and a stretch of more than 6 minutes without scoring. But their defense kept them within single digits until Killian Tillie and Clarke scored inside to give GU some room.

• One of the more interesting segments this season came with a little more than a minute left in the first half.

It began with a Pacific turnover (as 14 of Gonzaga’s first-half possessions did) and Rui Hachimura steal. The highlight, at first, was Hachimura’s breakaway dunk. That’s when things went a bit south.

The dunk inspired Butler to do his version of the Tarzan yell, not something you hear during every game.

Meanwhile, Jeremiah Bailey had been called for a foul. Despite what looked to be light contact was determined to be of the flagrant variety, after a video review, because Hachimura was defenseless.

That put Hachimura at the line with no one else. No matter. When he hit both free throws, he still mimed giving low fives to nonexistent teammates.

“I like that,” Rothman said. “Keep your routine, even if nobody is there.”