Staying here (open from Easter to the end of October) means either “glamping” – booking one of the rustic shepherd’s huts, treehouses, yurts or bell tents – or camping – booking a site in their wildflower meadow and bringing your own tent. All glamping accommodations have beds with goose-down duvets, linen and blankets, wood-burning stoves and accommodate two people; some have room for an extra camp bed. From about $230 for 2 nights midweek (the minimum stay) to about $1,020 for seven nights in high season. Camping costs about $20 per person. Extra charges for breakfast baskets, charcoal, kindling and whatnot. No children younger than 12.

Knepp Wildland Safaris run from Easter to the end of October. Visitors may walk unattended on the marked public footpaths through Knepp Estate at any time of year but Knepp also offers a wide variety of guided wildlife safaris, ranging from the short and gentle – the two-hour “Walk on the Wild Side,” for about $40 per person to the five-hour “Deer Rut Photographic Safari,” which costs about $115. Other safaris, both on foot and in vehicles, focus on the dawn chorus, bats and moths, purple emperor butterflies, Sussex oaks, owls, kingfishers and other highlights of the natural world. For landowners interested in nature restoration themselves the day-long “Rewilding Workshop” costs about $120, including lunch. You can also create a bespoke safari, tailored to your particular taste. There are dawn, dusk and half-day safaris, as well as the magical Nightingale Safari, which lasts from 9 p.m. to midnight and includes dinner. All safaris should be booked in advance.

I’m in a six-wheeled vehicle, bumping across rough terrain, watching for wild animals. This is open low scrubland, interspersed by big messy thorn bushes. Ten of us sit silent, binoculars ready, scanning for longhorn cattle, red and fallow deer, wild horses and wild pigs. When we set out, a convoy of white storks, with black-banded, long-fingered wings, wheeled slowly overhead.

We’re not in Africa, though. We’re in suburban Sussex, an hour from London. But this is ancient England, a landscape left to its own devices and roamed by large native herbivores.

Knepp Castle is a 3,500-acre estate that has been owned by the Burrell family for more than 220 years. They’ve always farmed it, despite the poor clay soil. But in 2000, the current owners, conservationist Charlie Burrell and his wife, the writer Isabella Tree, decided to make a radical change. They “re-wilded” Knepp, returning it to a state of minimal human intervention.

The landscape is now mostly under the stewardship of the animals; with their rooting, grazing and browsing habits, they determine what grows here. The plants – grasses, wildflowers, shrubs and trees – have erupted, spreading and rooting and seeding into their own wild systems, creating a complex habitat for scores of species. The results have been unplanned, disorderly and miraculous.

I’m here for a “Re-Wilding Safari,” which will teach me how to do this. It’s not because I plan to repurpose my own modest acres, but because I couldn’t get into a regular safari: Knepp is hot, and all the tours are booked solid.

We bump to a stop in a field. On the far side stand three gigantic animals – a cow and calf and, a bit further, a bull – Old English Longhorns. The cow and calf are smudgy gray and white, and her great pale horns curve backward, as though blown by the wind. The bull is chocolate, clouded with white, as though someone spilled flour on him. His horns are shorter and curve down.

They watch us. They keep what Burrell calls a decent “flight distance,” which makes them feel safe. When I look back later the cow and her calf have melted into the woods, but the bull is still on duty. When I look again, he has vanished.

These cattle have their own lives. They don’t need us. This makes them more interesting.

That morning, we gathered in an old half-timbered barn. (Knepp dates to the 12th century: King John hunted deer here, and so did Henry VIII.) We settled in with coffee and pastries to hear Charlie Burrell tell his story. 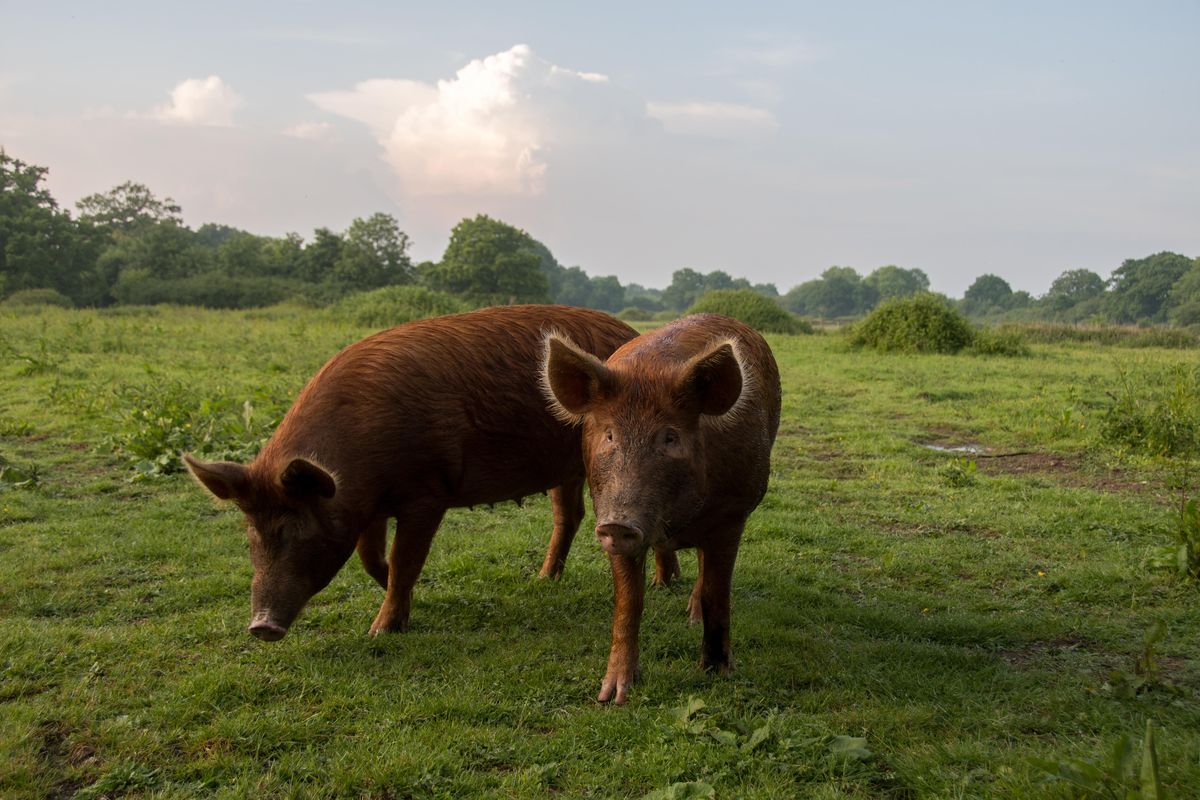 He is in his early 50s, sturdy, rumpled and cheerful, with brown eyes and curly hair. He and his wife took over Knepp in 1987, farming it according to the most modern techniques. Every year, they lost money. Knepp was headed for the brink.

They noticed something else, too. Knepp was famous for its ancient oaks, which seemed to be faltering. An oak expert was called in. Plowing was destroying the essential network of fungus that connected the trees underground. Chemical fertilizers were killing off other organisms essential to the oaks, as well. It seemed that, besides pointing them toward bankruptcy, farming was destroying the very symbol of Knepp. Burrell and Tree decided on a big change.

The conventional theory held that England was a “closed-canopy” forest before humans arrived and cut down the trees. But the theory was contradicted by ancient oaks such as the ones at Knepp; they aren’t a forest species, but an open grassland species. Dutch naturalist Frans Vera theorized that big grazing animals would disrupt a forest system and create an open woodscape. Burrell and Tree embraced Vera’s idea.

They established a scientific advisory board for the property, put up high perimeter fences and began letting the land go feral. Thorn, scrub and sallow (a kind of willow) began spreading, and big animals were brought in to compete with the plants. Knepp doesn’t have all of Britain’s original breeds, but it has some of their descendants and proxies.

All these animals do different things: grazing, browsing, trampling, rooting, fertilizing and seeding. They keep the forest from springing up. And the plants fight back. Oaks, for example, have their own avian allies, the jays. The birds bury acorns under thornbushes, where the seeds produce oak saplings. The spiky thornbush, nature’s barbed wire, provides protection until the sapling has stretched higher than the browse line. So each big messy thornbush is a live nursery for a baby oak, and this field of low scrub will be dotted with massive trees in a half-century.

Exmoor ponies graze in a wide meadow, heads snapping up alertly at our approach. They’re bays, with thick black manes and tails, round bellies and slim legs.

The stallion’s forelock is so thick and heavy he has to look at us sideways, but he holds us firmly in his gaze. This is his herd; we are interlopers.

In another meadow a herd of majestic red deer raise their heads, the stag’s enormous antlers like huge airy chandeliers. The indigenous reds are the largest and most muscular of the three deer species at Knepp.

Fallow deer are smaller and dappled with white. They’re latecomers, having arrived with the Normans, but still they’ve been here for 1,000 years. Fallow are famous for lekking, which means they put on spectacular shows during the mid-October rut. The stags paw out shallow swales where they challenge all comers, snorting and bellowing, pulsing with testosterone. They lower their heads and charge each other, cracking and clashing. The does watch.

We move on into the woods. We want to see pigs – who doesn’t? – but they’re hard to find, as they wander about singly. Finally, we see a cinnamon-colored sow and a young pig on a rutted path. Tall and lean and busy, they keep a healthy flight distance but ignore us as they snuffle along.

The burgeoning habitat attracts rare and endangered flying species. Knepp boasts the largest population in Britain of the Purple Emperor butterfly; nightingales, after years of decline, are nesting there in rising numbers. Endangered turtledoves have appeared, as have rare bats and owls, beetles and moths. You can time your visit to coincide with the arrival of your favorite migrator or with the deer lek. Or you can just go, as I did, and see what you find.

It’s hard to say why Knepp is so exciting. Yet somehow it’s thrilling.

It’s the opposite of a zoo. These animals are free to do what they will, and what they will is transformative. After the human assault of heavy machinery, industrial noise, chemical toxins and the impoverishment of the soil, these big, purposeful animals now go quietly about their lives. They’re restoring the soil, creating habitat and revitalizing the natural community.

After millennia of imposing ourselves on the landscape, this radical reversal offers a deep satisfaction. It’s good to stand in the presence of this thriving landscape, to witness it as it teems and bustles, in good hands.