Gonzaga has made strides taking away the opponent’s primary scoring option over the past eight games, something it struggled with during the first month of the season.

Those were some of the best individuals and teams Gonzaga has faced this season. Still, the West Coast Conference offers a steady diet of capable guards, particularly point guards, and the latest to test the Zags, Loyola Marymount’s James Batemon, experienced a tough night.

The fifth-ranked Zags shut down Batemon and the rest of the Lions 73-55 in front of a full house of 6,000 Thursday night at the McCarthey Athletic Center. It’s the seventh time in eight games Gonzaga has limited the opposition to 55 points or less.

The Zags (17-2, 4-0 WCC) were their usual efficient selves on offense, shooting over 50 percent in both halves and dominating in the lane (42 paint points).

But the other end of the floor was more impressive.

The Zags slowed down Batemon, who came in averaging nearly 18 points but finished with 12, as well as LMU’s second and third scoring threats, 7-foot-3 center Mattias Markusson and 6-5, 243-pound forward Eli Scott, showing off their defensive versatility in the process.

TV Take: Comfortable night in The Kennel for everyone except Loyola Marymount

No matter how you feel about the local broadcast trio who bring Gonzaga’s basketball games into local living rooms, there is something comforting about the continuity of roles. | Read more

Batemon, who tossed in 27 points against Gonzaga in the WCC Tournament last March, made just 5 of 12 shots and committed four turnovers, two on consecutive plays as Gonzaga expanded its lead to 55-26. Josh Perkins, Geno Crandall and, at times, Jeremy Jones took turns defending Batemon, who also had to deal with rim protectors Brandon Clarke, Rui Hachimura and Killian Tillie when he navigated into the paint.

“Batemon is their guy,” Perkins said. “Coaches did a great job with the scouting report, and a lot of credit goes to the whole team. Knowing we can heat somebody up and no matter what, having BC (Clarke), Killian and Rui behind you to protect the hoop … it’s just making things tough for them. And making others prove stuff they haven’t shown so far.”

Markusson, who averages 11.2 points, had six points, including two buckets after Gonzaga’s lead soared to 29. Scott, who had 18, 15 and 14 points in LMU’s first three conference games, scored just seven points.

“Markusson is super tall and the ‘4’ man. (Scott) is not as tall, but super strong,” said Clarke, who finished with 13 points, four assists and three blocks. “I worked on my strength a lot in the offseason, and I try not to get bullied much.” 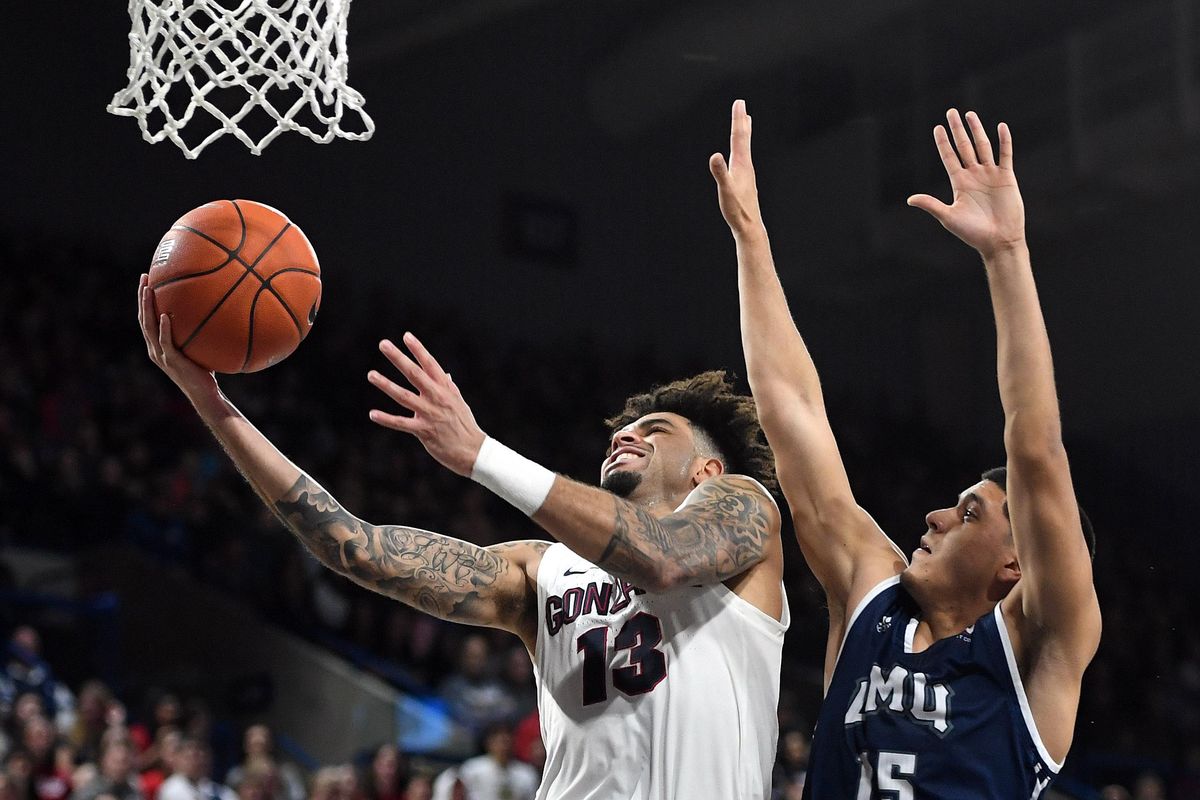 Gonzaga guard Josh Perkins (13) heads to the basket as Loyola Marymount guard Joe Quintana (15) defends during the first half of a college basketball game, Thurs., Jan. 17, 2019, at the McCarthey Athletic Center. (Colin Mulvany / The Spokesman-Review)

“It proves we can guard anybody, big guys, smaller guys,” said Tillie, who had seven points and seven rebounds in 24 minutes. “It’s a strength for us. We did a good job against Batemon shrinking the floor. He had trouble scoring over us.”

LMU, which relies on its defense more than its offense, went on a late scoring rush to avoid its season low, 53 points versus CSU Riverside. The Lions scored 28 points on their first 46 possessions. They scored 25 points in the final 10 minutes.

Gonzaga’s concentration drifted after leading by as many as 29. LMU (13-5, 1-3) closed within 20 near the 5-minute mark, prompting Hachimura and Clarke to return to the court.

“I felt good defensively, especially with that first 32 minutes,” coach Mark Few said. “Once we got the lead extended, we were pretty sloppy and careless.”

Kispert scored nine of his 12 points in the first half as Gonzaga built a 36-22 lead.

The Lions, patiently working the shot clock, kept it close until Gonzaga opened up some space with a 17-4 spurt that began with Zach Norvell Jr.’s reverse layup after an LMU turnover.

Norvell led the Zags with 17 points and four assists. LMU committed 11 of its 17 turnovers in the first half. GU capitalized with 20 points off turnovers.