During the 2007 Super Bowl, Coca-Cola Co. debuted a 30-second commercial featuring a timeline of significant moments in black history.

“Montgomery, 1955: Woman remains seated. And stands for justice,” the ad says in red text beside an image of a Coke bottle from that era. The next frame reads: “D.C., 1963: A man inspires a nation to dream together.”

That man, of course, was Martin Luther King Jr. And the commercial was designed to paint Coca-Cola as a partner of the civil rights movement that King helped lead.

But if you ask Darryl Brice, a sociology professor at Highline College in Des Moines, Washington, the Coke commercial leaves out an important detail: that on April 3, 1968, the day before his assassination, King called attention to the unequal treatment of black employees at Coca-Cola and other companies. King said in his final speech: “Go out and tell your neighbors not to buy Coca Cola in Memphis.” 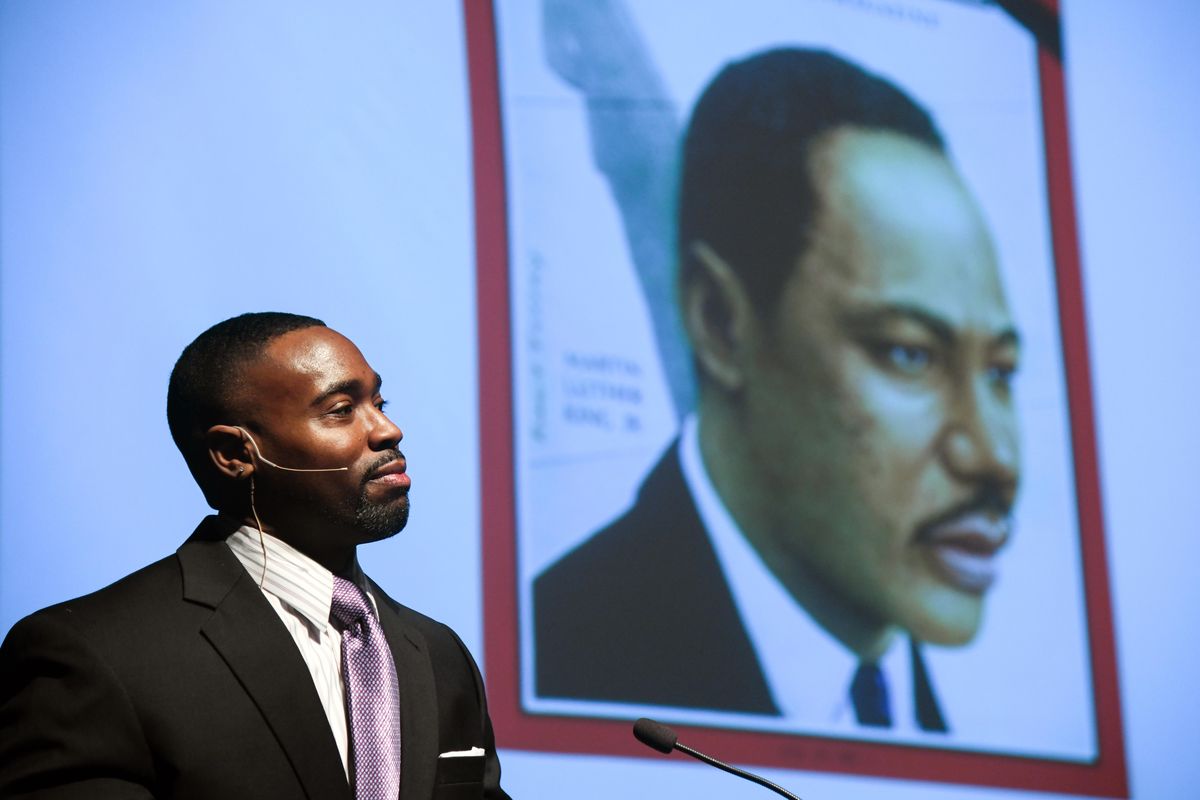 Darryl Brice, a sociology professor from Highline College in Des Moines, Washington, visited Spokane Community College on Thursday, Jan. 17, 2018, to discuss the ways in which key pieces of Martin Luther King Jr.’s legacy have been omitted from public discourse. Brice’s lecture was titled “Bread and Circuses: Exploring the Legacy of the ‘Real’ Martin Luther King Jr.” (Dan Pelle / The Spokesman-Review)

In a lecture at Spokane Community College on Thursday morning, just ahead of Martin Luther King Jr. Day, Brice said the Coke commercial exemplifies the ways in which key pieces of King’s legacy have been omitted from public discourse.

“You would never know that he was talking about boycotting Coke if you just looked at Coca-Cola commercials,” Brice said. “That’s the importance of understanding how his legacy has been co-opted.”

Brice argued that to truly understand King, schools and other institutions must do a better job of explaining the man’s politics, which many white elites at the time considered radical and dangerous.

“One of the things that gets omitted is how quickly the United States turned on Dr. King,” Brice said. “You would never know from the way that they present it and go back and talk about him, but he was largely hated. He went from being Time magazine’s Man of the Year to being arrested over 30 times.”

Brice said an honest analysis of King requires a focus on his philosophy of civil disobedience and “creative maladjustment,” as well as the 1967 Poor People’s Campaign, in which King called for “a radical redistribution of economic and political power.”

Brice also urged students to pick up copies of King’s final book, “Where Do We Go From Here?” and “The COINTELPRO Papers,” the collection of declassified FBI memos that revealed how the government sought to quash dissent by communists, black nationalists and civil rights leaders, including King.

Throughout his lecture, Brice compared King’s era to the problems of today: mass incarceration of black and brown men, growing racial disparities in household incomes, bias in hiring decisions and segregation that persists because of racist policies such as redlining, all of which have been documented in government data and academic research.

“If your starting point is African enslavement, everything is better. If that’s your bar, that’s a really low bar. Duh, of course things are better,” Brice said. “But if we’re looking in reference to what our counterparts have, we still see tons of disparities. It’s still problematic.”