Early in Gonzaga’s blowout win over host Santa Clara on Thursday night, the SWX broadcast flashed a graphic on the screen.

It listed the four schools that had won 26 consecutive conference road games.

There was Kansas from almost 100 years ago. So long, in fact, it was before there was a national championship.

But the other names on the list, except one, won titles. There was UCLA, twice, and UNLV. The other name, of course, was Gonzaga’s.

Now the Bulldogs stand alone, and they did it with ease, building a 36-point halftime lead en route to a 98-39 West Coast Conference victory.

• Before the near-whitewash began, Greg Heister and analyst Richard Fox, describing the action for Root and SWX, focused on two items: The Zags’ road winning streak and Josh Perkins.

• Perkins can be counted on for a couple of things every night. The senior point guard will get his assists, more than six a game. And he’ll take care of the ball, only turning it over a couple of times on average.

Oh, and the Zags will win.

“This is a point guard who, at times early in his career, struggled taking care of the ball,” Fox said before the tip. “He has fixed those issues this year. He has turned himself into one of the best point guards in the country.”

But scoring a whole lot of points isn’t something he does regularly. He did Thursday. As the Bulldogs (19-2, 6-0 West Coast Conference) broke out to 20-2 lead, Perkins was the No. 1 scoring option.

He finished with 18 points, including two 3-pointers and a couple of imaginative finishes inside. And he didn’t neglect his strengths, with eight assists and zero turnovers.

Gonzaga didn’t have a turnover until 4 minutes had passed in the second half. The Bulldogs finished with a school-record low two.

• The record 27th consecutive road win was the easier one to predict, as the fourth-ranked Zags had dominated Santa Clara (11-10, 3-4) by 43 points in Spokane 19 days ago.

“Everyone talks about the home-court advantage in the Kennel,” Fox said. “They do it on the road as well.”

• Fox has been pounding on the defensive drum for a while now, with the beat accompanied by lyrics focused on national success based on how well the Zags compete on that end.

He couldn’t find anything to complain about, at least in the first half.

“This is about as good as Gonzaga has looked all year,” Fox said with GU leading 44-10 and 3 minutes left in the opening half.

Which is different from the Zags’ last game, at Portland last week. In that one, the Pilots’ guards had more than a few straight-line drives to the rim.

“The last two games were pretty average defensively,” assistant coach Brian Michaelson said in a halftime interview. This one wasn’t.

With head coach Mark Few on a knee in front of the GU bench as the Zags dominated in the first half (Santa Clara shot less than 30 percent, hit just two 3-pointers and turned it over six times), the Bulldogs didn’t give up a direct drive to the rim until 8:12 was left in the opening half.

“It just seems, week to week, they are getting better,” Fox said. “Things are tighter on (the defensive) end of the floor.” 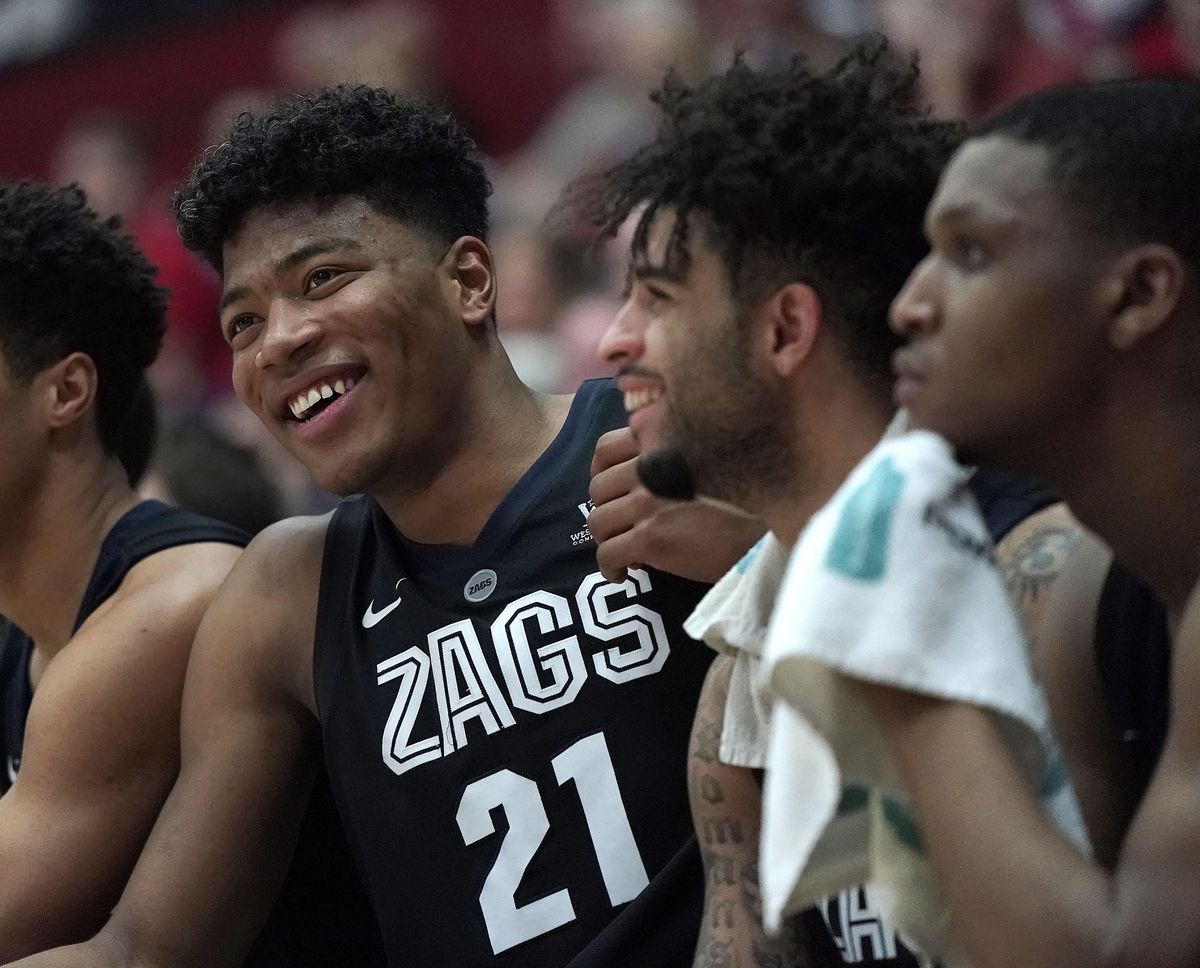 • The Leavey Center floor takes some getting used to, what with its mission-centered design and the faded color scheme. And the palm tree running through the key on one side is also a bit jarring.

• The Broncos missed a lot of shots, 35 by game’s end. But they didn’t get many offensive rebounds. Early on, coach Herb Sendek wasn’t even having any of his players go to the offensive glass.

They were so worried about the Gonzaga fast break – GU had just four points in transition – they were retreating while the ball was in the air.

It’s part of why the Zags had a 19-2 advantage in second-chance points.

• Broadcasters prepare material for blowouts like this one. But one has to wonder if Heister and Fox had enough for a game that was unofficially out of reach 10 minutes in.

But one subject that might get a lot of play as the season wears on: How good is this Gonzaga team?

The duo agreed that it is about as good an offensive group as Gonzaga has put on the court. But whether the Zags will reach their goals, Fox once again emphasized, depends on the defensive end.

“Gonzaga has been dialed in defensively as they have been throughout this conference schedule,” Fox said. “(This was) a really tremendous performance.”