Otis Hardware in Otis Orchards has an employee that doesn’t appear on the payroll, but Sam the English springer spaniel is still there every day, rain or shine.

Sam greets customers, of course, but his main job happens once shoppers take things off the shelf. He takes the items in his mouth, trotting briskly to the front counter to drop each off with the cashiers before coming back for more.

“He’ll stand at the end of the aisle and as soon as they pick something, boom, he goes and grabs it and brings it to the counter,” said Sam’s owner, hardware store employee Kim Rose. “He’ll pace between customers and wait for someone to pick something out.”

When Rose started at Otis Hardware six years ago there was already a store dog, Jazz, who was owned by manager Teresa Phelps. Rose said once he saw Jazz, he knew he wanted to get a dog that would come to work with him.

He visited the Spokane County Regional Animal Protection Service every day until he found Sam. “He pushed his cheek up against the screen when I knelt down,” Rose said. “He was mine.”

Sam was a high-strung pup in those days, and Rose worked carefully to train him. “I worked with him constantly,” he said. “It took a little while to calm him down. He’s a good boy.”

The store’s regular customers know Sam and just automatically hold out an item for the dog to fetch once they’ve selected it. But people who don’t know Sam generally pull back in confusion, Rose said. “Sam’s trying to get it and they don’t know why,” he said. “He knows there’s a treat at the end of it.”

While Rose trained Sam to be well-behaved in the store, he didn’t train him to bring items to the front counter. Sam learned that by watching Jazz. “He saw that she was getting treats, and he wanted some,” he said.

Phelps said Jazz’s work started simply enough. On freight days, employees would give her boxes to bring to the front counter, and she would be rewarded with a treat. Then one day, in search of treats, she brought 30 spark plugs to the register.

“We told her that wasn’t OK,” Phelps said. “She discovered if she took things from customers and brought them up, that was OK. That’s how it started.”

Jazz retired a few years ago, and now Sam works the store, though Phelps has a new dog, Odie, that she’s training.

Every time Rose helps a customer, Sam is right there, waiting expectantly. He gently takes each item in his mouth and trots off to get his reward. His favorite treat is a carrot. Rose said he’s only broken one thing during his five-year career.

“Once he broke a light bulb, but that’s because he dropped it, not because he bit through it,” Rose said. “He’s got a really soft mouth.”

Being gentle was one of the things Rose trained him to do. If an item had teeth marks on it, Sam wouldn’t get a treat. The dog quickly learned to be careful with the items customers gave him. 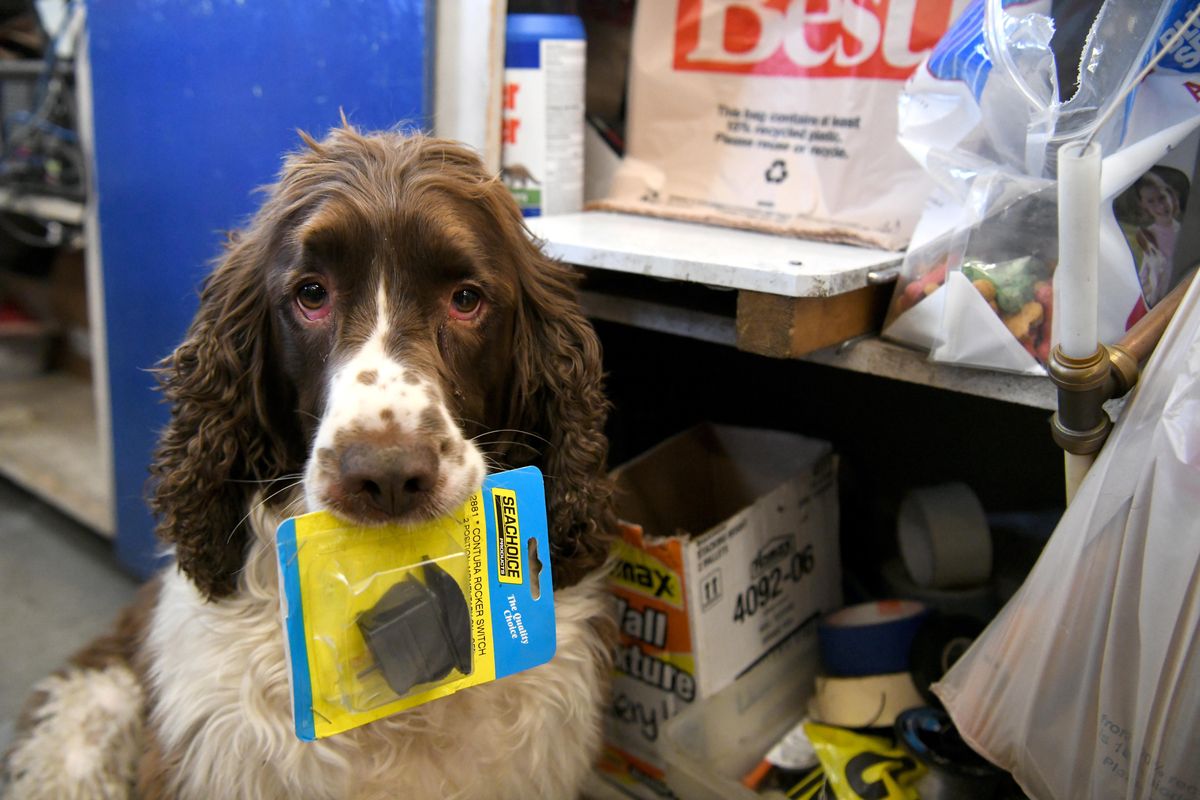 Sam, an English springer spaniel belonging to hardware clerk Kim Rose, helps out at the store by bringing merchandise selected by customers to the cashier at Otis Hardware in Otis Orchards. Each time he performs the task, he gets a dog treat, seen in a bag at right, Friday, January 18, 2019. Sam has been carrying items to the cashier for more than four years, taking over from the previous dog, Jazz, who has since retired. (Jesse Tinsley / The Spokesman-Review)

Every so often Sam will let Rose know that it’s time to go outside. The two head to an empty field behind the store, where Sam takes a bathroom break. If there’s time, Rose and Sam will play fetch with a rock.

“He likes rocks,” Rose said. “I’ll throw a tennis ball, and he’ll come back with a rock.”

When break time is over, Sam trots back inside the store on Rose’s heels, ready to go back to work.

“The store is all he knows,” Rose said. “He does not like me out of his sight.”