Most times Gonzaga appears on an ESPN network, the analyst informing the viewer about the Bulldogs, this year and in the past, has little to no connection to one of the nation’s winningest programs this century.

That wasn’t the case Thursday night in their easy 93-63 West Coast Conference win at Brigham Young.

Though Dave Feldman, doing the play-by-play, has only done a handful of GU games, the analyst was Dan Dickau, who not only is familiar to Spokane-area viewers on the local broadcast crew, but is one of the best guards in Zag history.

• Dickau was locked in early, just as fourth-ranked Gonzaga’s defense was.

When the broadcast returned after the halftime studio shows, Feldman dropped this nugget: “Twenty-four points is the fewest BYU has scored in a half all season.”

If you wanted to know why, Dickau had already explained it to you.

The Gonzaga defensive game plan revolved around slowing BYU post Yoeli Childs, the 6-foot-8 forward who averages 22.3 points per game. In the opening half, the Zags did just that.

“Gonzaga has given (the Cougars) a number of looks so far,” Dickau noticed midway through the half. “They have doubled really hard on a couple of occasions. They’ve dug down and faked the double team. (Childs has) done a good job of handling things early in the game.”

Maybe, but Childs shot just 2 of 6 in the opening 20 minutes for eight points. He finished with 12 points on 3-of-11 shooting.

• When Gonzaga plays on ESPN or ESPN2, there is a good chance the game will begin late and on another of the ESPN family of networks. Both happened Thursday night.

Arizona State’s 95-88 win over rival Arizona took overtime, so the Zags and BYU took the court on ESPNews.

By the time the Pac-12 game had ended and the rerun of PTI returned to News, Gonzaga led by double digits.

If you had waited patiently on ESPN2, why?

Before the game began, Feldman, who works in San Francisco, said “if you haven’t seen Gonzaga …” before delving into the phenomena that is Rui Hachimura.

But if you’re a college basketball fan, who would seem to be about the only ones watching the 8:10 p.m. start, why would you have missed the nation’s fourth-ranked team?

Later, Feldman doubled down, asking “if you are not familiar with them,” before citing all of the Bulldogs’ dominating offensive statistics.

It was a good advertisement for getting more familiar with the Zags. 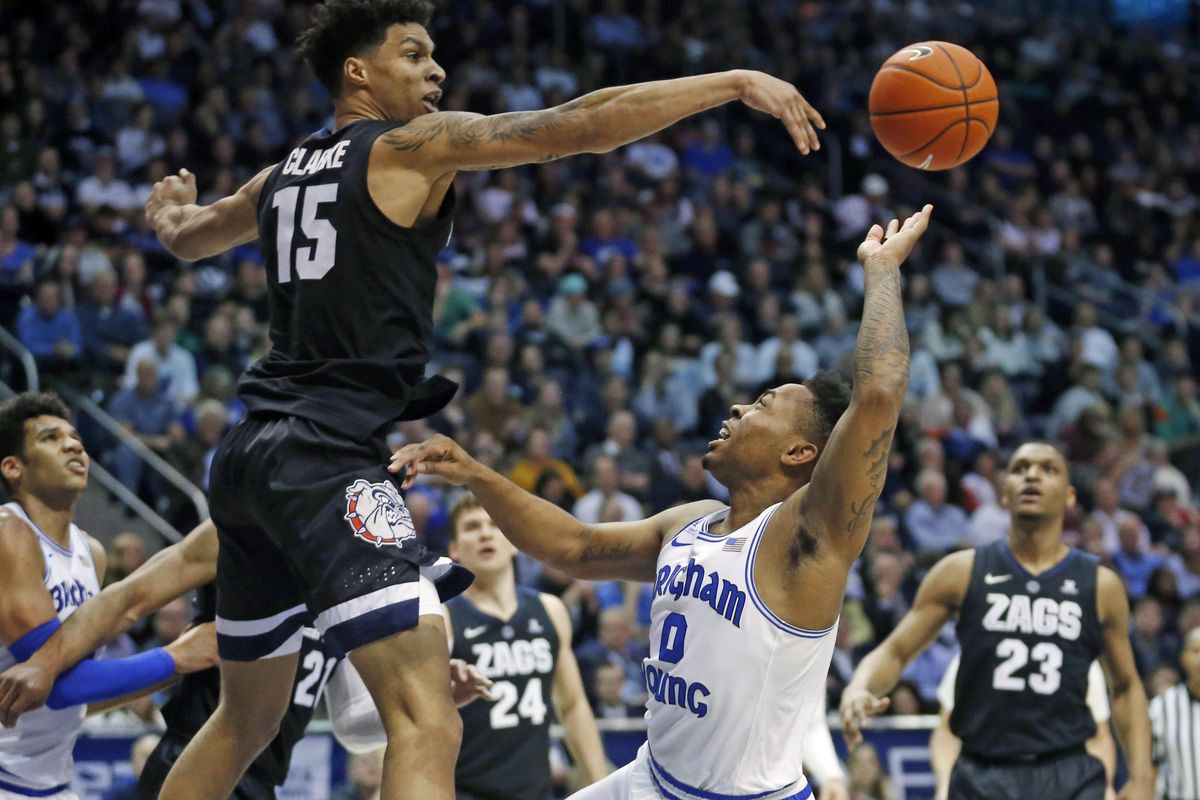 • Childs was never much of a factor, despite the Cougars (13-10 overall, 5-3 in West Coast Conference play) adjusting their attack to isolate him on a block with TJ Haws, the Cougars’ best 3-point shooter, making the entry pass from a wing. That took away the double-down from the guard.

But Childs never really got going. Part of that was foul trouble – he fouled out with 3:24 left – and the rest was the defense of Hachimura, Brandon Clarke and Killian Tillie.

• Speaking of those inside players, they were the Zags’ offensive focus. Nothing illustrated that more than the start of the second half, when Gonzaga (20-2, 7-0) put the game into the cooler.

Clarke had matched Childs’ first-half point total with eight, then separated himself by scoring the Zags’ first nine of the half. He finished with 23 points – he was 10 of 13 from the field – and nine rebounds. Hachimura added another 20 points and nine boards.

• The Zags’ offense has so many weapons, it can overcome an off night from one of its key parts.

Josh Perkins struggled to put the ball into the basket, hitting just 2 of 7 shots. But he did have 10 assists and hounded Haws much of the night.

The scoring load was picked up by Corey Kispert, who hit 6 of 9 attempts from the field, 4 of 6 from beyond the arc, and finished with 16 points.

• The game was over so quickly – it finished at 9:50 – the broadcast had time to interview Mark Few afterward.

He used the time to give Dickau a hard time for his defense – and to praise his team’s defensive effort.

“As of late, we’ve really been kind of adhering to our principles,” he said. “I’m proud of the guys for that.”

He praised Clarke, the rebounding effort – Gonzaga had a 41-31 edge – and the recent improvement.