Standing on the top step of the shaking ladder, 74-year-old Mac McCauley dove Monday into the massive radial piston engine of the B-17 Flying Fortress with a pair of Channellock pliers.

Having retired more than 20 years ago, it was an odd place to find the older version of the kid from California who grew up near an airport and used to beg for rides in airplanes. Now people line up and beg for rides from McCauley, who flies one of a handful airworthy B-17s left in the world.

“I fly this thing every single day,” McCauley said with a smile that said so much more.

McCauley is one of the pilots who flew in a group of World War II vintage warplanes to Spokane International Airport on Monday as part of the Collings Foundation’s Wings of Freedom Tour.

Along with the Boeing B-17, the tour includes the last flying Consolidated B-24 Liberator, a P-51 Mustang, a Curtiss P-40 Warhawk made famous by the Flying Tigers, and the B-25 Mitchell, the model of plane flown off USS Hornet aircraft carrier in 1942 during the Doolittle Raid on Tokyo.

The tour, which honors the pilots and maintenance workers who kept them in the war and the workers who built them, will be offering up-close viewing, rides and even a chance to fly some of the planes through Wednesday at Signature Flight Support, 8136 W. Pilot Drive, which is on private-business side of the airport.

The B-17 is painted to honor the “Nine O Nine,” which flew 140 missions and never had a mechanical abort or came home with an injured crew member.

“It was considered the luckiest plane in the Eighth Air Force,” McCauley said.

The plane had 609 patches, which covered holes from bullets or anti-aircraft shrapnel, when it was flown home to be cut into scrap, he said. McCauley explained that the plane now painted to honor the “Nine O Nine” actually flew sea rescue missions out of Panama with a boat affixed to its bottom.

The airplane, which led the United States’ bombing campaign against Germany, has radial engines that each take 37 1/2 gallons of oil. McCauley explained that the massive engines burn about four gallons of oil an hour.

He’s been flying the bird for about 21 years, he said.

“This is such a great airplane,” McCauley said as he looked up with oily hands. “She doesn’t like crosswinds too much. When the weather is really rough, it’s like wrestling a gorilla. For the most part, it’s a pleasure to fly.”

One of the honors of his life, he said, was when he flew with Basil Hackleman, who piloted the actual “Nine O Nine” in several its missions over Germany.

“Over the years, I got to meet the guys from the Greatest Generation who flew it,” he said. “The first time I cried in 20 years was when (Hackleman) passed away. He was one of the greatest guys you ever met.” 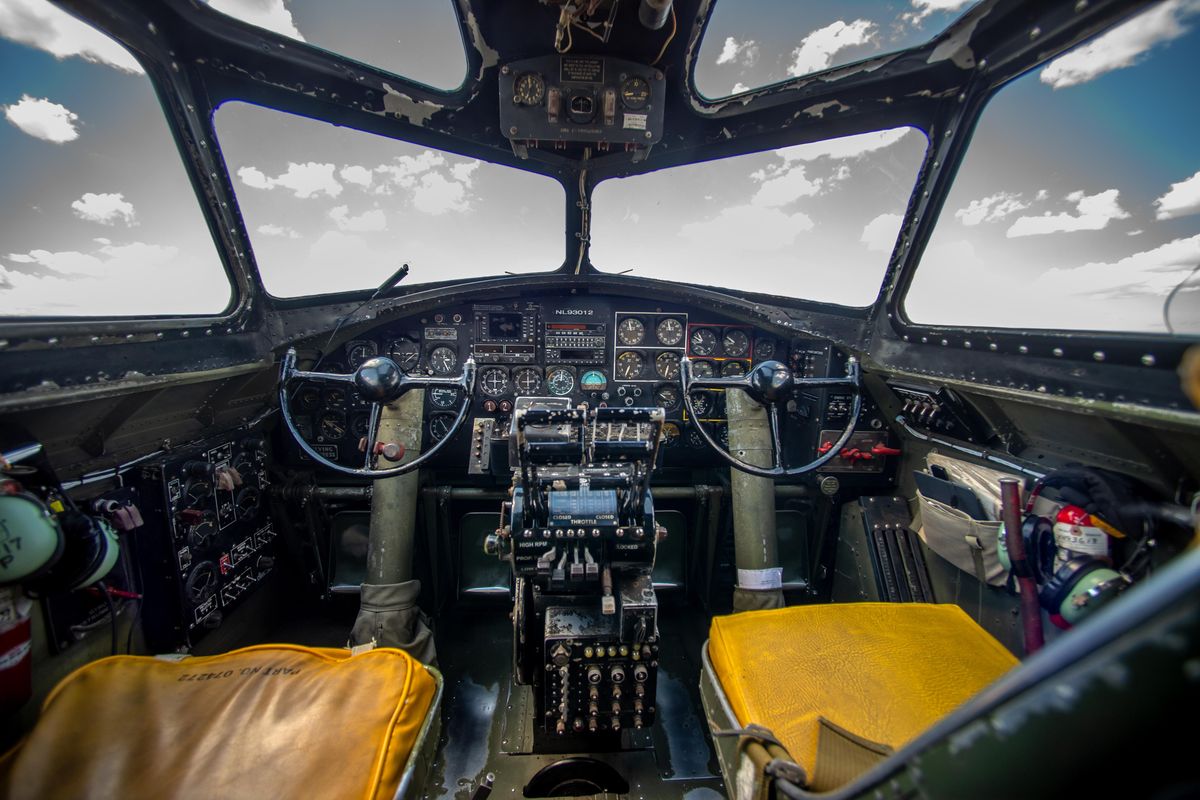 This is the cockpit of the B17 Flying Fortress visiting Spokane, Monday, July 1, 2019, at Signature Aviation at the Spokane International Airport. (Jesse Tinsley / The Spokesman-Review)

The B-24, now called “Witchcraft,” flew anti-submarine missions out of England. After Germany surrendered, Whyte said, the B-24 flew combat missions over Japan. The plane now used in the tour was retained by India and remained in India’s military service until 1969, Whyte said.

The original “Witchcraft” was scrapped like almost all of more than 18,400 planes built for the war. It was the most prolific of all bombers the United States produced for World War II.

“I fly all three (bombers) but the B-24 is my favorite,” Whyte said. “It’s not hard, but you can’t let your guard down. You have a pilot, co-pilot and a flight engineer and we are busy all the time.”

The Wings of Freedom Tour is now in its 30th year, Whyte said.

“In the early days, we were for the World War II pilots so they could see their airplanes,” he said. “Now, it’s for people who want to know what their dad or their uncle or their grandfather did and they want to make a connection.”

The pilot for the P-51 Mustang, 58-year-old John Davidson, is also a trainer, which allows him to give lessons while giving rides in the iconic fighter, which earned its lethal reputation by flying bomber-escort missions over Germany.

When Davidson isn’t flying the “Toulouse Nuts,” which is the one of the last remaining training models of the P-51, Davidson flies cargo jets for UPS.

“It’s a completely different experience,” Davidson said of flying the two planes. Flying the P-51 “is much more of a pure experience. I pinch myself ever time I get in. As a kid, I would have never dreamed that I would get to do it.”