When former finance executive Melissa DeMotte traveled for work, she made it a point to visit independent bookstores, but didn’t envision owning one.

Then, Borders in Coeur d’Alene closed in 2011, creating the need for a community bookstore, she said.

DeMotte attended a one-day seminar about the bookstore business and after some research and contemplation, she opened The Well-Read Moose.

“It’s been really good. I feel like since our inception, our sales level has exceeded what I anticipated in the first five years,” she said. “People are really enjoying browsing and talking to experts about books, and we have a good mix of tourism that helps as well. I’ve been pleased with our sales growth.”

The Well-Read Moose is one of many independent bookstores in the area riding a national wave of resurgence, as more people gravitate toward shopping local and big-box giants like Barnes & Noble struggle to keep customers.

Barnes & Noble indicated in its 2018 annual report it was working on a plan to better serve customers and return to its bookselling roots with a plan for smaller stores. The company operates about 630 stores nationwide.

The downsizing comes at a time when new bookstores are opening nationwide, established stores are finding new owners and a new generation is entering the market as owners, managers or frontline booksellers, according to the American Booksellers Association, a nonprofit that provides education and resources to independent bookstores.

Independent bookstore sales jumped 5% in 2018 over the prior year, an increase the booksellers group attributes to entrepreneurial efforts and unique ties forged by stores with their respective cities. They have become community centers, the group says, hosting events and connecting readers to authors.

While not every bookstore has seen this type of growth, from a national perspective, there has been pronounced resurgence in independent bookstore ownership over the past decade, said Dan Cullen, senior strategy officer with the American Booksellers Association.

When Amazon entered the book-selling market in 1995, followed by Barnes & Noble and Borders, the number of independent bookstores in the United States declined 43%. However, independents made a comback after Borders shuttered in 2011, growing from roughly 1,800 stores to 2,500 today, according to the booksellers association.

“Literally, millions of consumers are making choices on where they want to spend their book-buying dollars, and they are choosing to spend them at independent bookstores,” Cullen said. “Independent bookstores have a unique and really vital connection in their local communities and it’s reflected from every facet of their business, from titles on their shelves to the dollars consumers are spending in the stores that are getting circulated in their communities.”

Ryan Raffaelli, an assistant professor in the organizational behavior unit of Harvard Business School, looked into how independent bookstores managed to thrive despite competition from Amazon.

His study on independent bookselling found that consumers still value community and personal contact over digital books. As a result, independent bookstores are placing emphasis on developing personal relationships with customers by helping them discover new titles and hosting events like book clubs, children’s story time and author events. 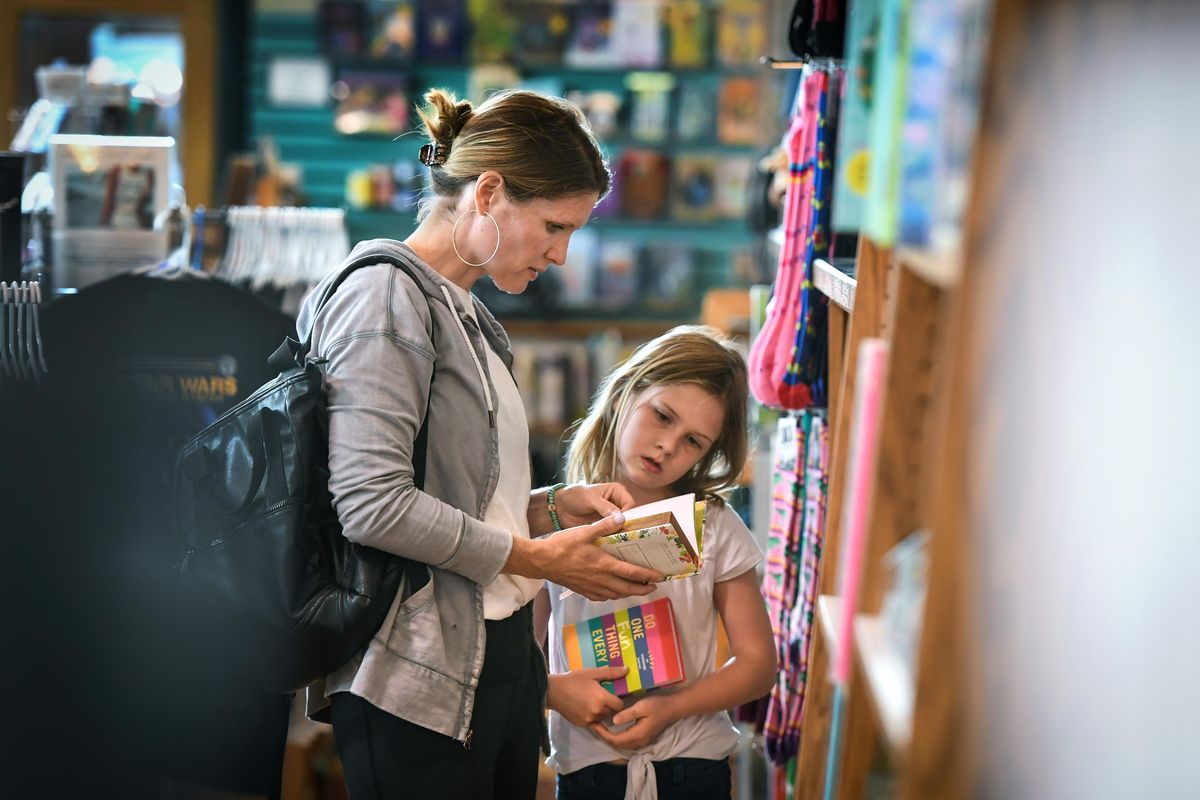 “People are looking at bookstores as community hubs. They want a place where they can go and relax. Bookstores are a good way to do that,” he said.. “There’s a segment of people that don’t want to be on the internet. We’ve seen a movement of some people just don’t want to be internet people and they are pretty fervent in their choice.”

Waite said Auntie’s not only attracts locals but tourists staying at the Davenport Grand Hotel across the street, who often say they don’t have an independent bookstore in their city.

DeMotte, owner of The Well-Read Moose, said while e-books provide another option for readers, she’s hearing from customers – including younger generations – that they are wanting a break from computers and smartphones.

“I think people get tired of being on their screen,” she said. “I think it’s a way to read, but the novelty has worn off a little bit. I don’t think (e-books) will go away, but it really proves that people want to pick books up, read the jacket and talk to somebody about it.”

It’s even hand-delivered books to local customers who ordered through the store’s website, she said.

“All those little things that independent bookstores do matter because we are really ingrained in the community,” DeMotte said.

DeMotte also hears from tourists who lament the lack of a locally owned bookstore where they live. Some consider The Well-Read Moose a destination spot when visiting Coeur d’Alene, she said.

“Tourists come in and spend several hundred dollars on books for their week on the lake, and they come back every year,” she said.

Waite, who also owns Merlyn’s Comics and Games, said he’s learned in the past six years the importance of being “hyper-flexible” in the booksellers market.

“The world changes on a dime, and with the internet, you have to be flexible with what you are going to do,” he said. “Auntie’s has always done events, but we’re doing them in different ways than we used to. A lot of bookstores are having movie and music nights. We aren’t quite there yet, but you have to do what makes people happy.”

He said independent booksellers don’t make a lot of money, so it’s a bit of a sacrifice to keep a store open, but they work hard and love what they do, in spite of challenges from online and big-box competitors like Amazon.

If people buy from big-box stores, Waite said, about 70% of the money goes out-of-state, but buying local ensures those dollars circulate in the community.

“The healthiest communities have the strongest local retail,” he said.

At The Well-Read Moose, DeMotte said she hopes to see sales continue to grow. Although she recently renewed her lease, she will consider the need for a bigger space in the future.

“I don’t think I want to open a second store, but it’s more the question of, ‘are we going to outgrow our space?’ ” she said. “It’s a problem, but a good problem.”