Directions: From Sandpoint, take SR 200 east to Clark Fork, Idaho. Turn north on Main Street in downtown Clark Fork, entrance to the national forest. The main street becomes Forest Road 276 (Mosquito Creek). After about 2.5 miles, turn right on Forest Road 2295 and continue about 1 mile. Turn left on road 2294 and watch for signs for Trail 65 (Scotchman Peak) in about 1 mile. The road ends at the trailhead.

Where to eat: Although there are plenty of good food options in downtown Sandpoint, for a quick stop swing by the Farmhouse Kitchen and Silo Bar (477227 Highway US-95 N, Ponderay, Idaho) off U.S. Highway 2 just north of downtown Sandpoint. The quesadillas are great.

As we reached the summit of Idaho’s Scotchman Peak, the wind picked up and America’s legacy of public land came into focus.

Looking north from the 7,000-foot summit, a sea of mountains and wild space disappeared into the horizon. Land untouched by roads or people.

Much of this is the proposed 88,000-acre Scotchman Peak Wilderness area.

“What you see are the vast tracks of roadless areas which are really part of our natural resource heritage here,” said Phil Hough, executive director of Friends of Scotchman Peaks Wilderness.

The mountain winds made it easy to forget the summer heat in the valleys below.

Large swaths of snow still covered areas adjacent to the trail and an aging cornice clung to the ridgeline. The entire tableau was reminiscent of higher, fiercer mountains.

It was a nice break from the heat that greeted us at the start of the hike several hours earlier and 3,500 feet below.

Now is the perfect time to head to North Idaho’s numerous mountains. Scotchman Peak, with its commanding views of Lake Pend Oreille to the south, Montana’s Cabinet Mountains to the east and Canada to the north, is a rewarding objective for a competent and fit hiker.

“There aren’t many places in the country where you can see three states and two countries from one vantage point,” Hough said.

The hike is about 8 miles round trip, but in the 4 uphill miles you gain more than 3,500 feet, making it a vigorous excursion. While the return is all downhill, it can be hard on knees and hips. Bring plenty of water as there is no reliable water source during the hike.

Keep an eye out for the mountain goats that call the area home. Do not touch or approach the wild animals and don’t let them lick the salt from your skin or gear. 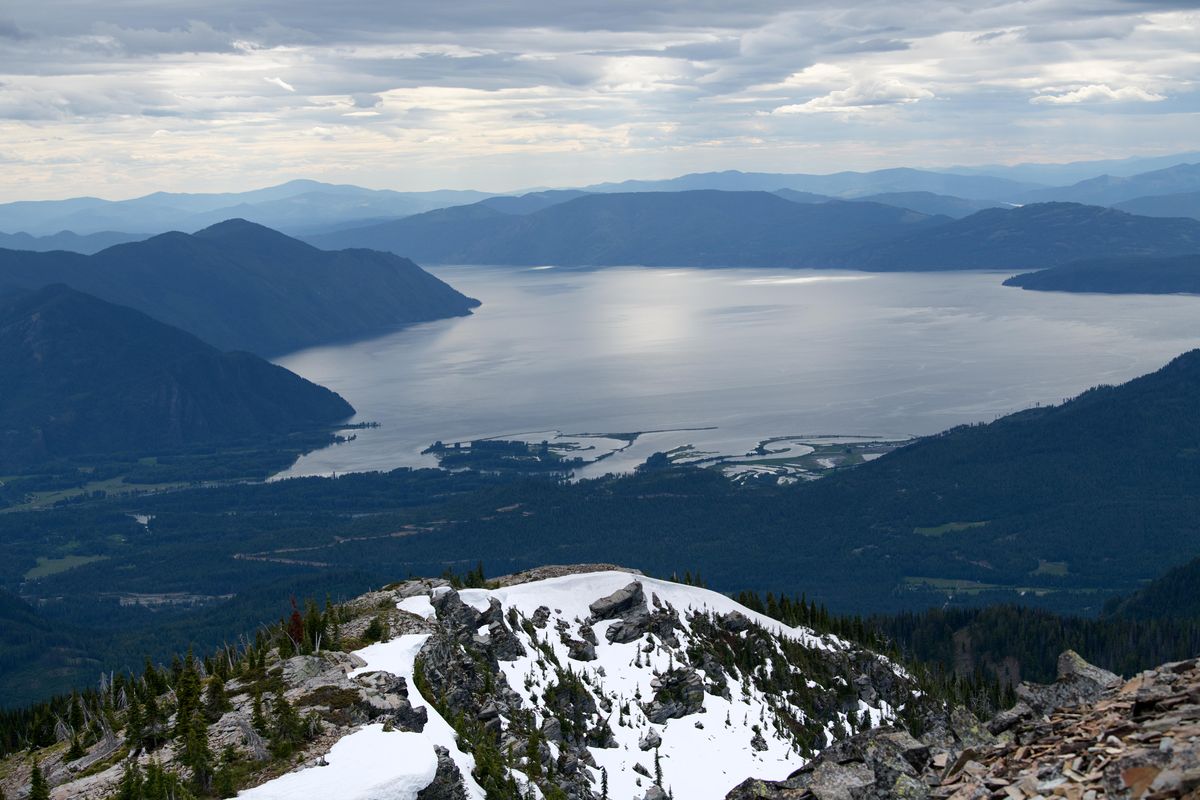 The trail (Scotchman Peak Trail 65) starts in a valley by the ominously named Mosquito Creek.

The first mile is steep, although it eases up after that.

From there, you’ll wind through the alpine forest and start switchbacking through fields of beargrass below the peak itself.

The hike gets interesting about two-thirds of the way up. Here the trail crisscrosses south-facing slopes with breathtaking views.

The peak itself is a nice summit well worth the sweat.

A small rock hut provides shelter from the wind. For three decades, the Forest Service used the peak as a fire lookout, according to former S/R outdoors writer Rich Landers in his book “100 Hikes in the Inland Northwest.” During that time, two watchmen were struck and killed by lightning.

Since then, it has become a popular regional hiking destination.

The surrounding area, of which the peak is a part, was first recommended for wilderness in 1970 and has been managed as recommended wilderness since the implementation of the 1987 Land Management Plan.

The wilderness designation, which had support from Sen. Jim Risch, R-Idaho, hit a roadblock in May 2018 when Bonner County voters rejected the proposed wilderness in an advisory vote. While the vote means nothing legally, it did prompt Risch to rescind his support of the federal designation.

As far as forest management goes, however, the U.S. Forest Service will continue managing the area as recommended wilderness, said Shoshana Cooper, a spokeswoman for Idaho Panhandle National Forests.

Many opponents of the wilderness designation believe it will make it impossible for the Forest Service to fight fires or conduct search and rescue missions. That’s not true.

While the advisory vote outcome was a setback, Hough said, Friends of Scotchman Peaks Wilderness will continue to fight for wilderness designation. The vote showed Hough the importance of reaching out to more people and showing why and how wilderness is of value to everyone.

“What we’re about is the long game,” he said. “Saving it for our children and grandchildren.”