Go ahead and buy tickets to Scarywood or Haunted Palouse for a scare from someone in a ghost costume, but the opportunity to see the real thing in Colfax might have vanished.

This past weekend, Travel Channel’s latest episode of “Ghost Adventures,” a paranormal investigation TV program, claimed to show “authentic” evidence of ghosts at St. Ignatius Hospital. An anomaly in a photo from a full-spectrum camera, which can capture ultraviolet and infrared light, appears to be a “a white misty apparition.”

The last of the building’s famous haunted tours was given at the end of 2018. They had been hosted on and off since 2015. The Colfax Chamber of Commerce, which gave the tours, no longer has a lease to use the building and hasn’t been able to contact the owner.

“We knew that we weren’t going to be able to do tours, and now we have tons of people calling (since the episode aired),” said Chamber Executive Director Valoree Gregory, who was also a tour guide. 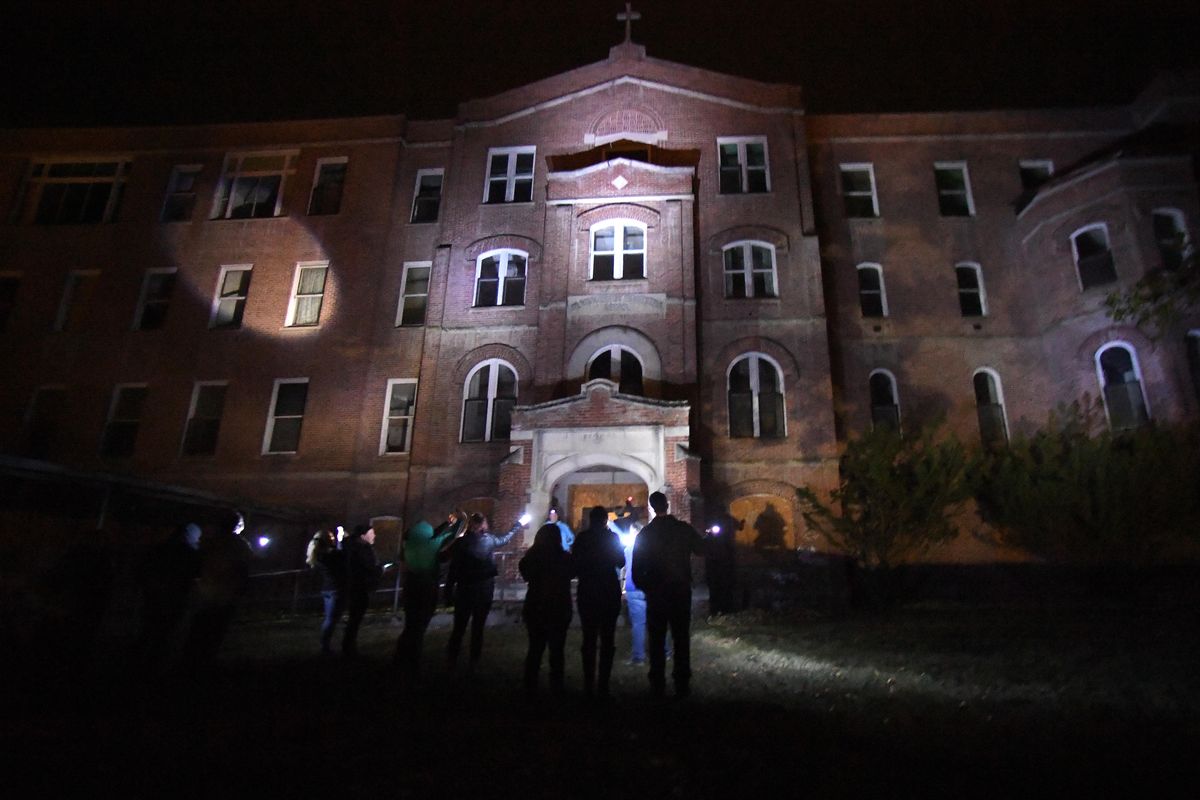 People gather outside the shuttered St. Ignatius Hospital before taking the Haunted Hospital tour sponsored by the Colfax Chamber of Commerce, Thursday, Oct. 6, 2016, in Colfax. (Colin Mulvany / The Spokesman-Review)

During the past few years, Gregory said she heard a handful of full-on conversations, saw a dark shadow come down the hall and felt a ghostly kick to the back of her foot when no one else was in the notoriously haunted building.

“No two ghost hunts were ever the same,” Chamber President Nancy Cochran said. “We saw different activity, and it was different people.”

Tour guides gave 85 ghost tours in a matter of six weeks one year and could have given more if not for their full-time jobs, according to Cochran.

Gregory said about 100 people called Tuesday asking to visit St. Ignatius. She estimated the tours alone earned about $20,000 a year for the Chamber after splitting sales with the building owner.

“Our biggest goal was that it brought tourists to Colfax,” Gregory said.

Out-of-town visitors made up the majority of the tours and benefited the small city’s economy by shopping, staying in hotels, filling up on gas and dining at restaurants.

The ghost tours also helped St. Ignatius itself, because the tour guides were the only ones keeping up and preserving the century-old building. Gregory said she made sure it was boarded up after tours to keep trespassers out, and checked on it every week.

The hospital was built by the Sisters of Providence and Mother Joseph in 1894, about eight years after Sacred Heart Medical Center in Spokane.

“I loved being able to bring the people in and share the history,” Cochran said.

Much of the building’s past was learned from locals who worked at the hospital and were still alive. Many residents know people who died there, and both Cochran’s husband and Gregory were born there.

Additionally, Gregory found documents and photos through her work at the Whitman County Historical Society.

But despite efforts to preserve it, the building is showing its age. The past winter was especially destructive, and the last time Gregory visited, portions of the roof were caved in.

“When it rains outside, it rains inside,” she said.

In April, a number of local business people were willing to buy the building at auction for the Chamber to give ghost tours, according to Gregory. But the starting bid of $129,000 was too high, considering the repairs that need to be made.

St. Ignatius’ last buyer, Derrick Fincher of Spokane Valley, was convicted of fraud in September, and the building has gone unsold since. Ownership has reverted to Anthony Girges, of Downey, California, according to the Whitman County assessor.

She said she had a tough time saying goodbye to the building’s spirits.

“We kind of got to know some of the ghosts personally,” she said. “ … Which seems kind of weird with a ghost, but that’s the point we’ve gotten to.”

Whoever the new owner may be, Gregory said she hopes to make a deal to give tours again.