This was about so much more than a sports bra.

Ask the 40 million Americans who watched the final match of the 1999 Women’s World Cup, and they’ll struggle to recall the score or the opponent.

But they remember Brandi Chastain and her soccer jersey, the one she pulled off her body in celebration – just like the guys always did.

Nobody missed that iconic moment, but almost everyone missed the point. It wasn’t Chastain who altered the fabric of American sports, it was the entire American team.

The 1999 Women’s World Cup soccer tournament was many things.

It was the best-attended women’s sports event in American history.

It was Chastain driving the winning penalty kick past the Chinese goalkeeper, followed by the rapturous piling-on of players on the hallowed grass of the Rose Bowl.

But mostly it was a game-changer – for soccer, women athletes and the landscape of American sports.

“I think it captured the eyes of a lot of young athletes who maybe were looking at other sports, but because of that team decided to play soccer.” 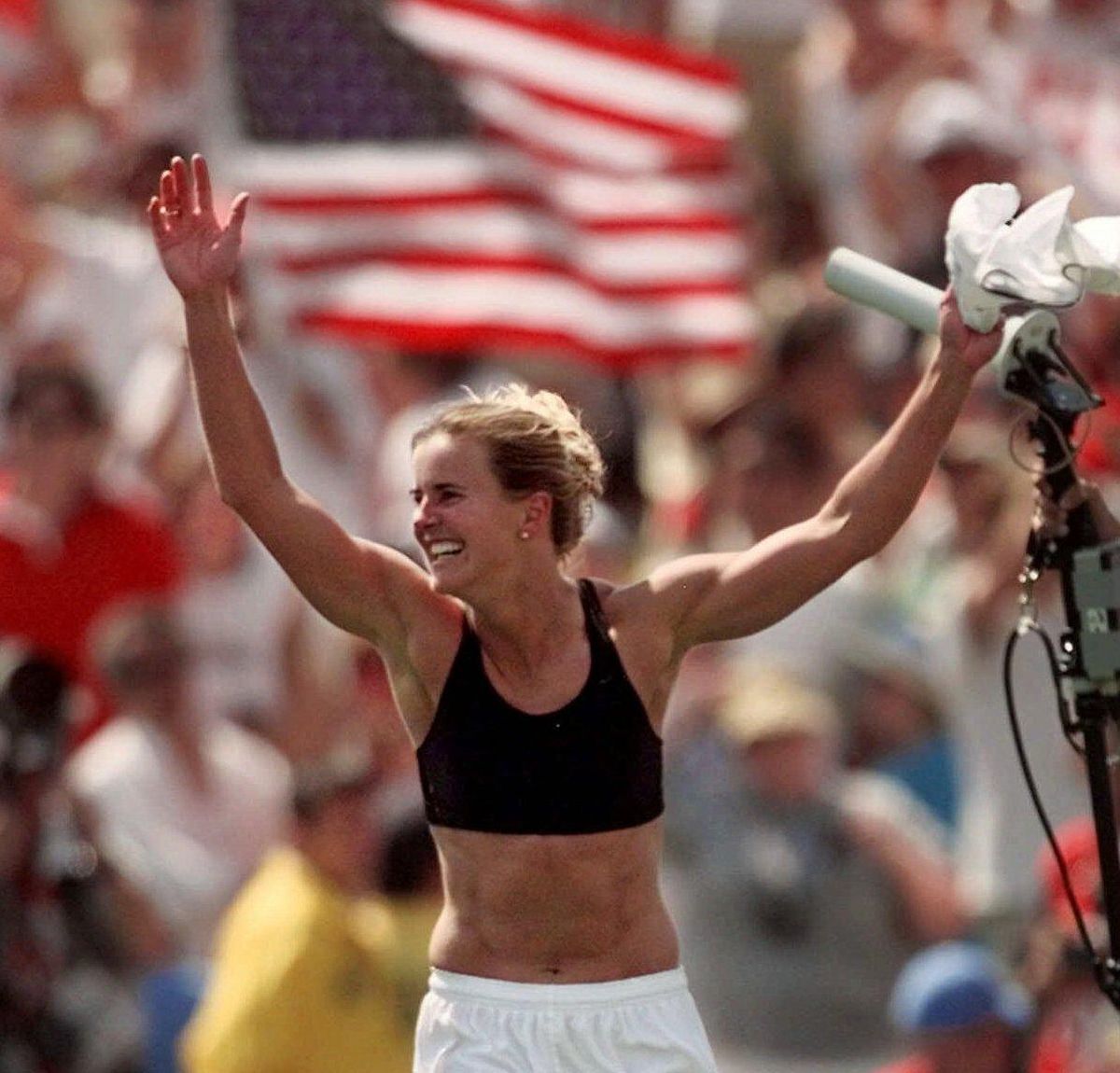 The United States’ Brandi Chastain celebrates by taking off her jersey after kicking the game winning overtime penalty shootout kick against China during the Women’s World Cup Final at the Rose Bowl in Pasadena, Calif., Saturday, July 10, 1999. The U.S. won the shootout 5-4. (MICHAEL CAULFIELD / Associated Press)

The 99ers weren’t the first Americans to raise the trophy – that happened at the inaugural World Cup in 1991.

But they were instant celebrities, the pop culture story of the year by some people’s reckoning. They made the cover of Time and Newsweek, celebrated for their social conscience as well as their success.

They certainly were noticed in Spokane, where only a few girls were playing organized soccer in the 1990s. Today, of the 2,500 soccer players in the Spokane Youth Sports Association, 45% are female.

Many of them stuck with the game, turning the Greater Spokane League into one of the best high school leagues in the state.

The 99ers were role models for a generation, which is now competing in another World Cup.

That’s the real point. The 99ers’ story was transcendent instead of transitory. This wasn’t an Olympic moment, when heroes are celebrated for a week and then forgotten before their image appears on a Wheaties box.

The 99ers didn’t let that happen. Players like Michelle Akers, Mia Hamm and Julie Foudy gave their lives to soccer even after their playing days were over.

They changed the game in many ways. Millions of girls followed in their cleats, changing the nation’s sports culture.

Recalled Bodnar: “I remember when I was growing up you’d hardly ever see a soccer game on TV, men’s or women’s.”

“But the way it ended, I thought it caught a lot of people’s attention,” Bodnar said.

After two hours, a 2-2 tie was broken when Chastain, a right-footed player, was instructed to take her penalty shot left-footed. As the ball beat keeper Gao Hong and struck the back of the net, Chastain whipped off her jersey in exultation.

“I had no idea that would be my reaction – it was truly genuine and it was insane and it was a relief and it was joy and it was gratitude all wrapped into one,” Chastain said at the time.

Seconds later, the entire team did the same.