The demonstration began with a march from the Spokane Convention Center, where the Unitarian Universalist Association is holding its annual general assembly.

Unitarian Universalism is a faith historically rooted in progressive Christianity that accepts and adopts beliefs from atheism and other religions and cultures. The national association has adopted a four-pronged social justice campaign that includes a focus on racial disparities in the criminal justice system.

“Jails have become a way of criminalizing poverty, mental illness and addiction,” said the Rev. Susan Frederick-Gray, the association’s president. “And, in the absence of investing in people and programs that lift communities up, we are investing in a system that is fundamentally dehumanizing, violent and cruel.” 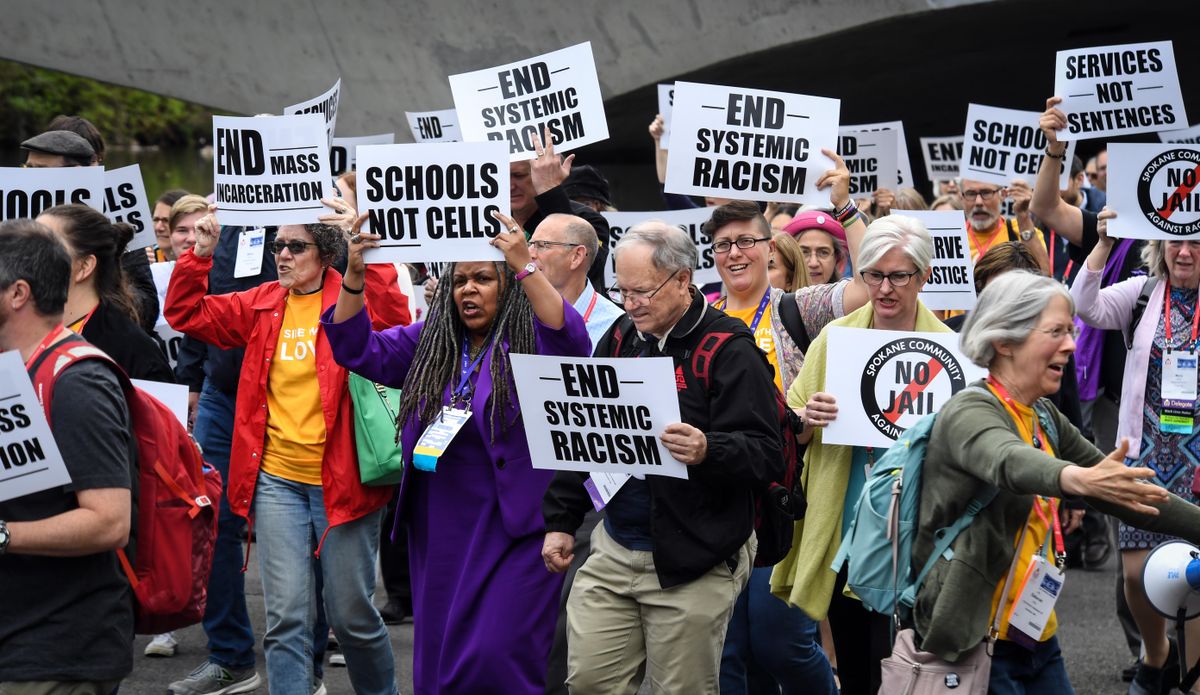 A crowd marches from the Spokane Convention Center through Riverfront Park to a rally opposing jail expansion on Thursday, June 20, 2019. (Dan Pelle / The Spokesman-Review)

“Yes, we care about safety,” she said. “We care about the safety of every person. We want families to feel secure. And we understand that jails are not about security and do not create security.”

In a statement read by the secretary of the Spokane NAACP, the group’s president, Kurtis Robinson, noted that 13 people have died in the county jail since 2015 and more than 70% of inmates are awaiting trial – that is, legally innocent. The last to die was Sharona Carroll, 39, on June 11.

Many in the crowd in Riverfront Park came from out of town to attend the Unitarian Universalist assembly. Together with locals, they recited chants of “No new jail!” “End mass incarceration!” and “End cash bail!”

“Spokane is a beautiful, beautiful city, but it’s also a very lonely city if you happen to be a person of color,” said Sandy Williams, who directs the Carl Maxey Center and publishes the Black Lens newspaper in Spokane. She criticized white residents who insist they “don’t see color.”

Citing statistics from various local agencies, Williams said black, Hispanic and Native American people in Spokane County are more likely than whites to live in poverty, to be jailed, to be suspended or expelled from school, to be homeless, unemployed and uninsured.

Local officials have talked for decades about overcrowding at the Spokane County Jail. Sheriff Ozzie Knezovich and others have called for additional space.

In recent years, the MacArthur Foundation has provided millions of dollars in grants to help the county lock up fewer people and create alternatives to incarceration. But the jail population has remained high, frustrating some activists.

Any effort to build a new jail would require approval from the Board of County Commissioners. In response to Thursday’s demonstration, a spokesman provided a statement on behalf of Commissioners Al French, Josh Kerns and Mary Kuney.

The statement noted city and county leaders are working with the Vera Institute of Justice and the JFA Institute to study the local justice system, and they have held public meetings to gather feedback.

“As a central component of this work, we have developed a Justice Task Force that includes government officials, law enforcement, business leaders, community members and services providers,” the statement said. “This group will ultimately develop recommendations to the Board of County Commissioners regarding our jail’s future.”