You don’t have to binge-watch classic movies to know that when a starlet wanted to “slip into something more comfortable,” she often stepped behind a decorative folding screen before shedding her clothes. As her dress inevitably flew over the top of the room divider, you couldn’t help but think: That screen is so glamorous. For budding interior design nerds like myself, it evoked a more elegant life and the kind of grown-up shenanigans that might be in my future. One day, I, too, may have a spirited conversation with a gentleman caller while a beautiful screen protects my modesty.

Today, such screens aren’t just a staple from old movies. Both vintage and brand new decorative versions seem to be everywhere – on the pages of interior design magazines, on your Instagram feed and even at big-name retailers. Online antique purveyors Chairish and 1stdibs have a wide selection of screens spanning various periods and styles. The direct-to-consumer furniture brand the Inside offers custom upholstered ones. World Market and CB2 sell rattan or wood versions for anyone who wants to convey a bohemian vibe on a budget. There are bespoke, avant-garde renditions from Milan-based Dimore Studio and Seattle designer Erich Ginder, and Apparatus Studio is offering a limited-edition, hand-embroidered one.

Decorative folding screens have been combining beauty and function for more than 2,000 years. They originated in China and have been traced back to at least 200 BC, but the most famous examples are the lacquered Coromandel screens, which were imported from China to Europe in the 17th century. Either hand-painted or inlaid with mother-of-pearl or tortoiseshell, Coromandel screens have acquired many stylish fans over the years. “If you think about the most iconic example of a screen that’s cemented in every interior designer’s memory, it’s Coco Chanel’s apartment on the Rue Cambon in Paris,” says designer Josh Hildreth, who often uses the decorative accents in his projects. 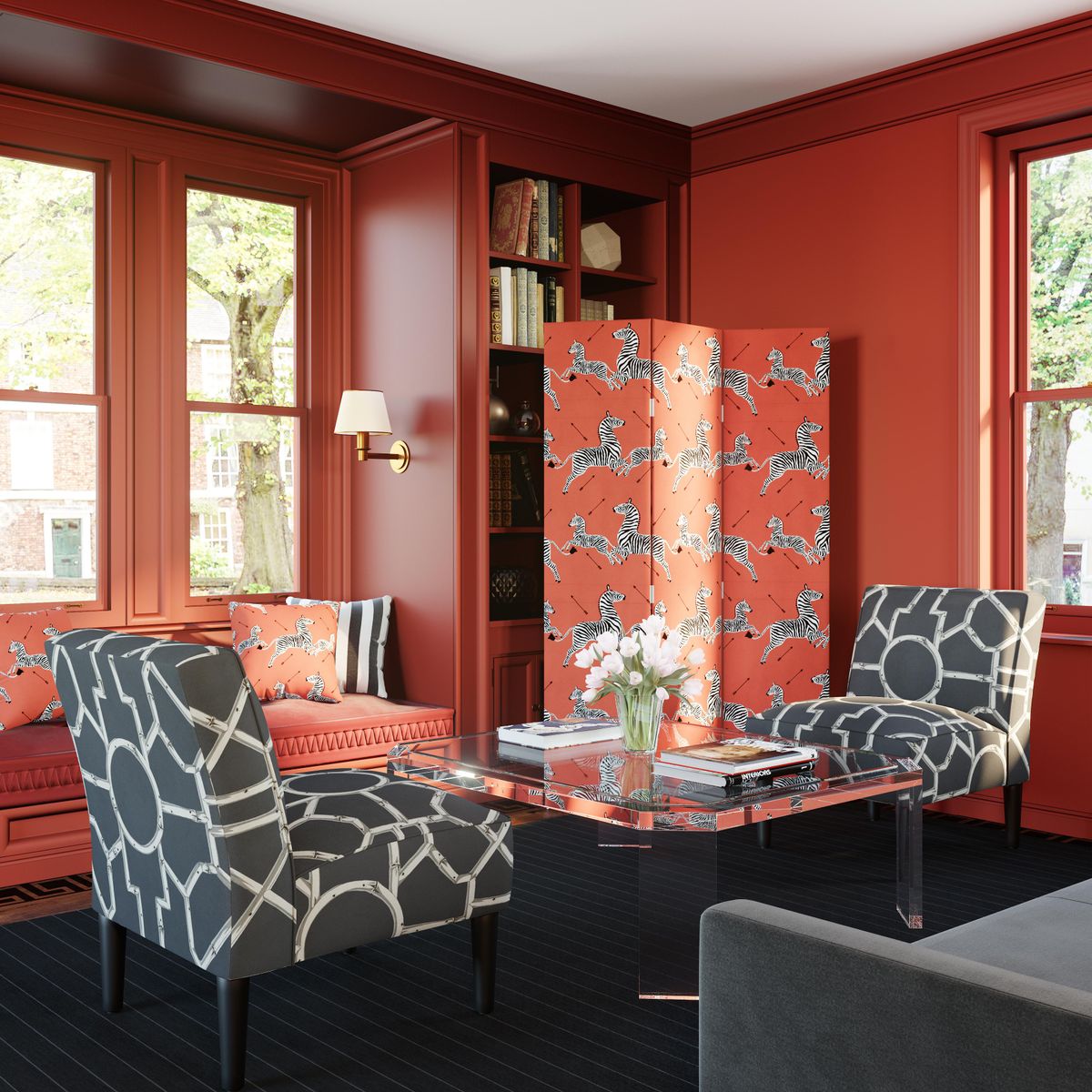 The Inside’s Scalamandre modern screen in the Coral Zebra pattern ($399). (The Inside / The Inside)

Screens’ close association with a more glamorous era make them especially appealing to a new generation. “Instagram has introduced photos of people like socialites Lee Radziwill and Marella Agnelli, who were known for their beautiful homes, and often these screens are in the background,” Hildreth says. “There’s a chicness to those images that people really respond to.”

But the trend isn’t just about fetishizing the past; plenty of recent projects feature screens, and images of those spaces are inspiring homeowners as well. Look no further than the March 2019 cover of House Beautiful, which featured a Nick Olsen-designed den with a vintage Japanese screen in the background. “Whether it’s through social media or some other source, people see beautiful spaces that are layered and textured and they want to emulate that,” says Christiane Lemieux, founder of the Inside.

For those looking to experiment, screens provide a low-lift way to add ornamentation to a space. For instance, the upholstered versions from the Inside are available in an array of zippy prints, including classic ones from Scalamandre, and could just as easily serve as a backdrop for a sofa or a headboard for a bed. “If you prop a screen against a wall, you get the same effect as you would with a wallpapered accent wall, but, unlike wallpaper, you can take it with you when you move,” Lemieux says. “It’s a great intuitive way to inject pattern into a space without having to commit to anything.”

In some ways, the resurgence of folding screens represents a shift in thinking about how to dress an interior. After years of mid-century-modern fever, homeowners are looking for ways to bring patina and personalization to their spaces and achieve a more layered, well-traveled look – call it the maximalist effect. “An antique screen can add a global element that blends beautifully with other pieces,” says designer Mona Hajj, who often employs them to bring a dash of romance and history to spaces where architecture is lacking.

By incorporating decorative screens, homeowners are rebelling not only against bland interiors but also one of the most prevalent trends of the past 40 years: the open floor plan. “With the creation of the great room, homeowners have been preoccupied with knocking down walls and creating communal space,” says designer Annie Elliott of Bossy Color. “Now there’s a slow move toward defining spaces by their functionality, while still maintaining that open feeling. I do think that people are trying to recover a little of what they’ve lost by opening up an entire floor, and screens can help.”

Given that screens have traditionally been used to divide and hide, it’s not surprising that they also appeal to the small-space dweller; they’ve long been a practical fix for those who live in studio apartments. “They can separate a bedroom from the living area in a small apartment or they can act as a decorative storage area to hide junk or clutter,” Lemieux says.

Screens are also an effective way to bring equilibrium to a room in which one design element is overshadowing everything else. That’s what Hildreth did when faced with furnishing a supersized ballroom for a D.C. show house in Potomac. “One end of the room was anchored by a large fireplace, so I found a huge beautiful black Coromandel screen,” he says. “I used that to ground the seating area, giving it equal heft.” Elliott employed a similar visual trick in a recent project; she upholstered a screen in the same fabric as the drapes, then installed it in a neglected corner of the room, extending the pattern throughout the space and creating a sense of balance.

Depending on the material, screens can provide another benefit. Those made of lacquer or tea paper can magnify or soften both the natural and artificial light in a space. “So much of how we experience or fall in love with a room has to do with the way light is reflected,” Hildreth says. “Having things with dimension, like the folds of a screen, gives the eye a reason to stop and linger, much more so than a flat wall. The effect is really magical.”