LAS VEGAS – Perhaps in a few day, the Gonzaga women will feel like playing basketball again.

They have no choice.

On Monday, their name will go up on the big board, a ticket that was punched weeks ago thanks to a season of excellence that included 28 wins and the West Coast Conference regular-season title.

Their body of work got them into the Big Dance. But now they must get back on their feet, which were swept from underneath them in the past 24 hours.

“It does put in perspective what we’re doing,” assistant coach Jordan Green said in a hallway while the BYU players and fans were celebrating on the Orleans Arena floor.

“It’s is a step in the journey, and we think we have a lot of basketball to be played,” Green said. “We’ll take a little break and get back to work.”

In another week, they’ll hit the road, probably as a five or six seed with a fighting chance to reach the Sweet 16.

Not that they didn’t put up a fight on Tuesday. However, the Zags were without two big weapons in Stockton and Townsend.

They say it’s hard to beat a team three times, but this wasn’t the same GU team BYU had beaten twice in the regular season.

“The game plan was similar,” Green said. “But were going from a team that has a lot of depth to a team that everyone’s having to play more minutes, and different positions at times.”

Instead of backing up Stockton, backup point guard Jessie Loera was on the floor for 36 minutes. Guards Chandler Smith and Katie Campbell logged 34 and 33 minutes, respectively.

The absence of Townsend meant 12 minutes apiece for Melody Kempton and seldom-used Louise Forsyth, but neither player managed to score.

“It was tough,” Green said. “But I think emotionally the team was ready.”

But the Zags (28-4) weren’t ready for BYU’s accuracy from beyond the arc. The Cougars made four of their first five and were 9 for 15 at the half.

“They are obviously a great 3-point-shooting team,” Green said. “We thought we had a game plan that would work, but any time we did give them an opportunity to make a big shot, they hit a big shot.

GU countered with the inside power of senior forward Zykera Rice, who got her team to the title game with a last-second layin in double overtime to beat Saint Mary’s in Monday’s semifinal.

Rice picked up where she left off, scoring on a similar play to open Tuesday’s game. Thanks to 10 points from Rice, the Zags led 23-19 after one quarter. Rice was Gonzaga’s lone selection on the all-tournament team.

BYU countered with a dominant second quarter, outscoring the Zags 23-7 to take a 42-30 lead into halftime.

The second half was an uphill battle, much like the 66-64 loss to BYU in the Kennel on Feb. 21. A double-digit deficit was whittled in half, thanks to GU’s grit in getting to the foul line and making those shots: 28 for 32 on the afternoon.

Two free throws from Smith cut the lead to 63-56 with 8 seconds left in the third quarter. There was still hope going into the fourth, trailing 65-56.

GU got no closer in the fourth and trailed by double digits for the final 8 1/2 minutes. The Zags were never closer than 12 the rest of the way.

“We did try some adjustments,” Green said. “We tried trapping and changing our defensive assignments, but when they got that lead they got comfortable.”

Rice led the Zags with 25 points on 6-for-10 shooting from the field. She also made all 12 of her foul shots. 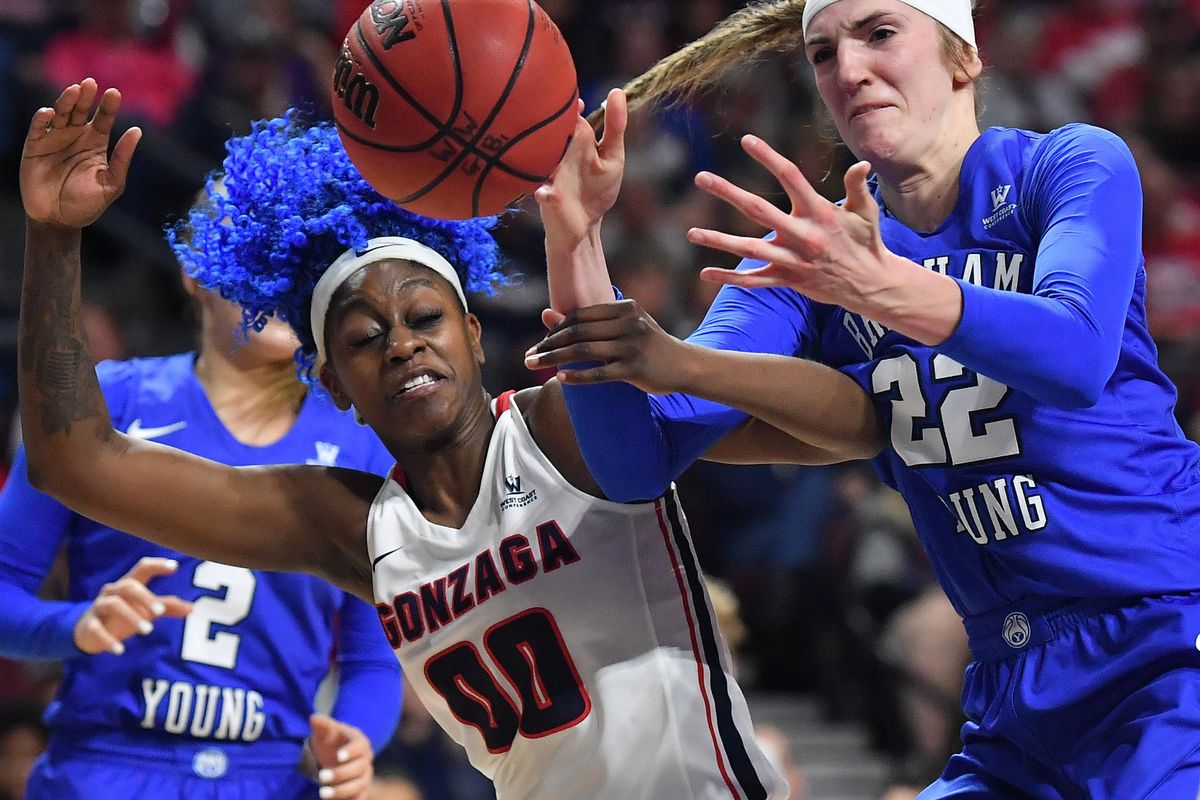