The makers of “Myst” are turning once again to their fans to fund what they hope is the future of world-building in video gaming.

“We could probably design something that publishers might be more interested in,” said Rand Miller, co-founder of Mead-based Cyan Worlds that developed the early 1990s adventure hit for PCs. “But it wouldn’t be true to what we do.”

Cyan launched a Kickstarter this week hoping to raise $1.3 million to develop “Firmament,” a title slated tentatively for release in summer 2020 that will be the company’s first title built for virtual reality platforms. Cyan made its previous game, “Obduction,” available for VR headsets in 2016 after its original release.

Miller had been shopping the title and a roughly 30-minute demo at trade shows, including last year’s Game Developers Conference in San Francisco, but the small independent studio will now rely on crowdsourcing support for its next title. Cyan had previous Kickstarter success with “Obduction” and last year’s “Myst 25th Anniversary Collection” that combined seven games in the original adventure series with exclusive artwork and artifacts that collectors quickly gobbled up.

“This just feels like it’s one more roll of the dice for us,” said Miller, who spoke Monday from his office ahead of the release of the Kickstarter campaign. “We at least get another chance to try another title.”

Cyan has released very little information about the game, in keeping with the company’s tradition of unfolding mysterious worlds for the player that require puzzle-solving for progression and revelation of more story. Miller confirmed “Firmament” exists outside of the universe created by “Myst,” which had players exploring a mysterious island, and “Obduction,” which sent players to an alien world.

With “Firmament,” Cyan is introducing a companion character that will break up the usual isolation that’s felt by players trying to tackle the company’s signature fiendish puzzles, Miller said. Several recent mainstream titles have employed a similar technique, like the quest-giving “Ghost” in Bungie’s “Destiny” series and the strange half-bird, half-dog creature “Trico” that the player befriends in Sony’s 2016 release, “The Last Guardian.”

Miller said the goal is for players to interact with their “mechanical adjunct” in “Firmament” in ways that are much more profound than simple storytelling and puzzle-solving.

“The most important part that I think is exciting, is this idea of learning to communicate with this companion,” Miller said. “You don’t know what it knows and what it doesn’t.”

If it’s funded, “Firmament” will launch at a time of great potential for virtual reality game development. Several “arcades” have started in the Inland Northwest that offer players a place to play titles on advanced hardware for a set period of time, including a planned location in a former Starbucks near Gonzaga University’s campus. At the same time, home systems for the PC and Playstation 4 console continue to slowly creep into a market that is still dominated by traditional titles developed for flat screens.

Sony announced this week it had sold 4.2 million VR headsets for its home console, an impressive number for new technology.

Industry numbers indicate that only 4.2 million Play Station 4 users have adopted the new VR headset technology while close to 100 million consoles have been sold.

But VR has a strong following among the next generation of game developers, said Elizabeth Goins, an associate professor specializing in game design at the Rochester Institute of Technology in New York. Demand for a class on VR game development exceeds the university’s supply of 30 headsets, she said.

Goins played “Myst” in the 1990s and was an original backer of “Obduction” in 2013. She said the virtual reality market is clamoring for content from developers with a pedigree that can deliver experiences longer than the 10-minute tech demos that currently dominate the market.

“I am really thrilled to see people making different types of games for VR,” Goins said. “Designing for VR is really different than if you’re designing something for just a monitor. There are things that you can get away with on a monitor that you can’t on a headset.”

Miller said he’s excited by the sustained interest in virtual reality, including the new arcades opening all over town. Even if Cyan’s narrative-driven experiences wouldn’t make sense in such a business model, their popularity means more players are donning headsets, which could persuade them to buy home systems just as the video arcades of the 1980s led to an increase in sales of Nintendo, Atari and Sega consoles.

“Back in the day, it would have been prohibitively expensive to buy the kind of power you needed to play the most advanced arcade games,” Miller said. “So you’d go put the quarter in, put your 50 cents in, and you got to play something that was much more advanced than what you had in your home.”

That obstacle could go away in home gaming if Google’s “Stadia” platform works as advertised. The tech giant announced last week it was working on a streaming service that would allow players to access advanced titles on comparatively middling hardware, including mobile devices and through the Google Chromecast smart TV device.

Miller said he thought the platform would give independent developers like Cyan access to an even greater number of players and simplify their process of development for one platform as opposed to multiple consoles or computers with varying processing power.

“The hardest aspect of our job is having to aim at all the various platforms,” Miller said. “It’s just insane.”

There was little said about the potential for VR games on Google’s new platform, which does not yet have a release date or price figure. But the revelation of the technology already has the industry buzzing about the potential to bring those experiences to a larger audience through Stadia.

For now, Cyan will focus on developing its new title by relying upon the same players who’ve stuck with the company through Myst and Obduction. The Kickstarter launched Tuesday morning with eight tiers of backer rewards, ranging from a digital copy of the game at $30 to a private dinner with Miller and a trip to the company’s headquarters for those giving $5,000. As of Tuesday afternoon, the developers already had raised $175,000 toward their total, with the campaign scheduled to end April 26.

“The fans we’ve got are here because they like doing this type of thing,” Miller said. “If we can support ourselves and keep doing it, this feels like being part of the indie group is not so bad these days.” 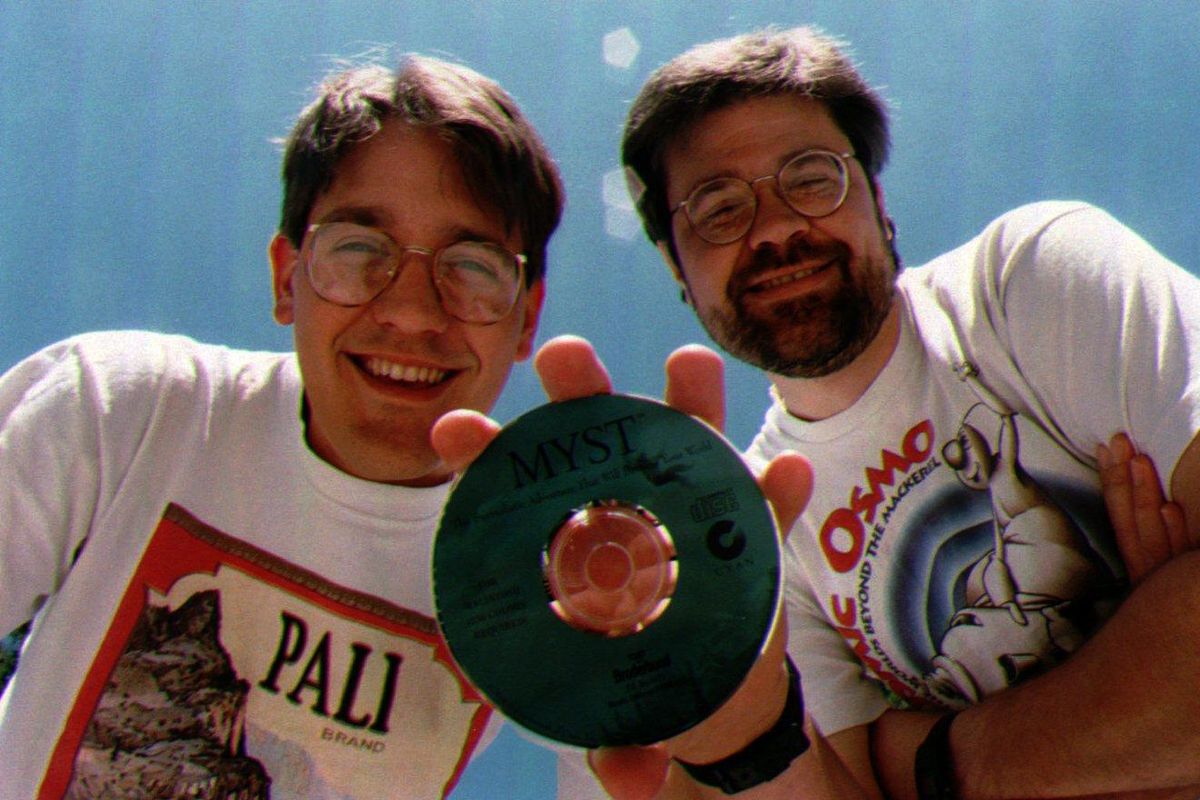 1994 - Robyn Miller, left, holds a copy of the CD-ROM for Myst with his brother, Rand Miller, in Spokane, Wash., July 25, 1994. The Millers are the creators of Myst, a best-selling computer game. (DON MARQUIS / Associated Press)