A GRIP ON SPORTS • I’m not sure there is a golf major with less cachet than the PGA. Heck, it’s so No. 4 of the four majors, it decided to change when it was played. Now that’s being on the low end of the pecking order, isn’t it?

• Different people will argue different tournaments as the best of golf’s four majors.

If your accent is similar to James Bond’s, then you go for The Open, or as it’s known on this side of the pond, the British Open. It’s the oldest of the four, of course, because the godforsaken game was invented in Scotland, a country with lots of godforsaken coastline. And that gives it a leg up. 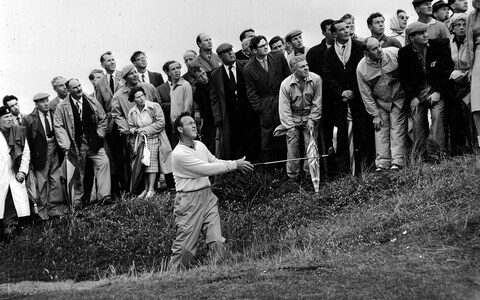 But for years the British Open – hey, I’m an American so that’s what I’m calling it – wasn’t even a blip on most folks’ radar. But then Arnold Palmer began making the cross-Atlantic trek in 1960, other stars followed and, viola, the luster was restored.

If you speak with an accent that sounds something like Boss Hogg, then the Masters is probably atop your list. Bobby Jones, the first (or second or third) of golf’s GOATs, started the tournament for his friends. But first he built a special course for them to play on, picking, of all places, Augusta, Georgia. Talk about godforsaken. It’s a city that features a Hooters. Not just any Hooters. One with a reserved parking space for John Daly.

But the Masters is special, and makes a solid claim for being the best of the best.

So does the U.S. Open, which for years was all about being “the hardest test of golf.” Hitting your ball in the godforsaken rough, no matter if the tournament was in California or Minnesota or Oklahoma, meant spending precious television time watching some marshal flail around with a walking stick in a oftentimes-vain attempt to discover the golf ball’s hiding place.

That’s not all that conducive to exceptional ratings, so the USGA eased up. Still, winning a U.S. Open title is something special. If your accent sounds like that of Judge Smails, it probably tops your list as the most major of the majors.

But the PGA? For much of its existence it held out as the last major tournament that featured match play. Television killed that a long time ago. Since then, it has been the late-arriving fourth child, its parents way too tired and old to hand out discipline or give it much attention. It’s foundered its way through mid-August, mostly forsaken by everyone and only really relevant when someone has already conquered the three previous majors.

That happened exactly … let me look this up … once. In 1953. Ben Hogan did it. Except then, the PGA and the British were so close together, Hogan couldn’t play in both. For the only time in his career, he picked the British. Of course he did.

The PGA that year finished up as the British was beginning, and the match-play event was won by Walter Burkemo. Ya, that Walter Burkemo. I don’t know who he is either. It’s no wonder the PGA moved to August in the late 1960s.

Now it is in May.

But it doesn’t matter. The tournament is, and probably always will be, the fourth of the four majors. That doesn’t mean, however, it isn’t worth following. It is. This year it has the can-Tiger-win-again storyline. It is being contested at Bethpage Black, the Long Island public course that, like the PGA, had its years of disrepair and neglect. Brooks Koepka, the most unknown great golfer of the past decade, is the defending champion.

It should be a great battle. If anybody is watching.

WSU: The Cougars need some size on their basketball roster. So Kyle Smith went overseas for a 7-foot center. Theo Lawson passes along as much information as he could find in this story. … Elsewhere in the Pac-12, the conference is not shy in scheduling Power 5 football opponents. … What a Stanford baseball player did recently is impressive. … USC’s Clay Helton is not paid all that much, compared to other coaches at legacy schools. … UCLA’s academic troubles aren’t easy to explain. … Picking up a transfer from Kentucky means Arizona will have to make another change on its basketball roster.

Gonzaga: Around the WCC, BYU’s baseball team is leading the conference, thanks to its pitching.

EWU: Those in the Big Sky Conference knew about Damian Lillard long before he became an NBA standout. Dan Thompson spoke with a few this week and has their impressions of the former Weber State star-turned Trail Blazer leader. … Cooper Kupp is someone the Rams want to keep happy. So giving younger brother Ketner a shot at making their roster is pretty smart. Ryan Collingwood has more in this story.

Preps: You enjoy prep golf? Then we have a couple of stories for you, one from Jim Meehan on a new tournament at the Kalispel Golf and Country Club and another about a Mead standout from Steve Christilaw. … You more interested in track and field? Ryan explores the number of outstanding jumpers in the Spokane area. … How about football? The WIAA has made some changes concerning classifications and football, which may impact the GSL this season. Dave Nichols takes a look at that issue. … Dave took some time yesterday to chat with Larry Weir for the latest Press Box pod. … We also have roundups of soccer and softball playoff action.

Mariners: No game yesterday, and only this feature on Dan Vogelbach to pass along.

Seahawks: Seattle has been ruthless in remaking its roster. Good for the Hawks. … When a tree falls in the New York forest, the Hawks hear it.

Sounders: The road beckons but first, Seattle scored twice and held off Orlando 2-1 at CenturyLink. The Sounders will not have another home MLS match until late June.

• This may be as early a heads-up as I’ve ever passed along, but it’s also a bit of a brag. There won’t be a column on Monday. My son asked me to join him for a morning round at my favorite area golf course. He even mentioned something about paying, though I’m honestly not sure he meant he was doing that or he wanted me to. Anyhow, we are heading south to … wait, can you guess which one it is? I’ve already given out one clue – the direction from Spokane. Maybe I’ll add another tomorrow. Until later …