Since 2009, Josh Jackman has coached and mentored Spokane-area youth climbers through the Spokane Climbing Association.

The club team costs $40 month plus a membership at Wild Walls.

For more information, contact Jackman at Josh@spokaneclimbing.org or drop into a practice Monday, Wednesday or Friday from 4 to 6:30 p.m. at Wild Walls (202 W. 2nd Ave.) during the school year.

On the night of July 27, 2007, Josh Jackman finished a shift at Gordy’s Sichuan Cafe, stopped briefly at Wild Walls – at the time Spokane’s only climbing gym – and started the long commute home to his father’s house near Suncrest.

Jackman, an avid climber, had just started a dream job as the gym manager. The 26-year-old loved everything about climbing. The movement. The physicality. The mental challenge. But most of all, he loved the community. He’d made lifelong friends and, as he said, climbing “made me more trusting and able to give trust.”

As he drove home along Highway 291 – which winds its way west, hugging the Spokane River – he may have been thinking about these things.

The most he can recall from one of the defining events of his life is the vague feeling of a noise, a loud crunch.

“Basically, I woke up in October in Harborview (Medical Center) in Seattle,” Jackman said.

On Monday, Jackman sat at Wild Walls and used a laser pointer to direct 15-year-old Aaron Dubbels’ movements on the wall above. Jackman pointed to a hold and Dubbels grabbed it. Jackman pointed to another. Eventually, Dubbels fell, and the two chatted about why he fell and how he can improve.

In one way, it’s an odd sight. Jackman is in a wheelchair. He’s unable to climb, and yet he’s coaching kids ranging in age from 8 to 18.

For anyone who climbs at either of Spokane’s gyms, it’s just another Monday. Since 2009, Jackman and his wheelchair have been a fixture at Wild Walls and more recently at the Bloc Yard Bouldering Gym. 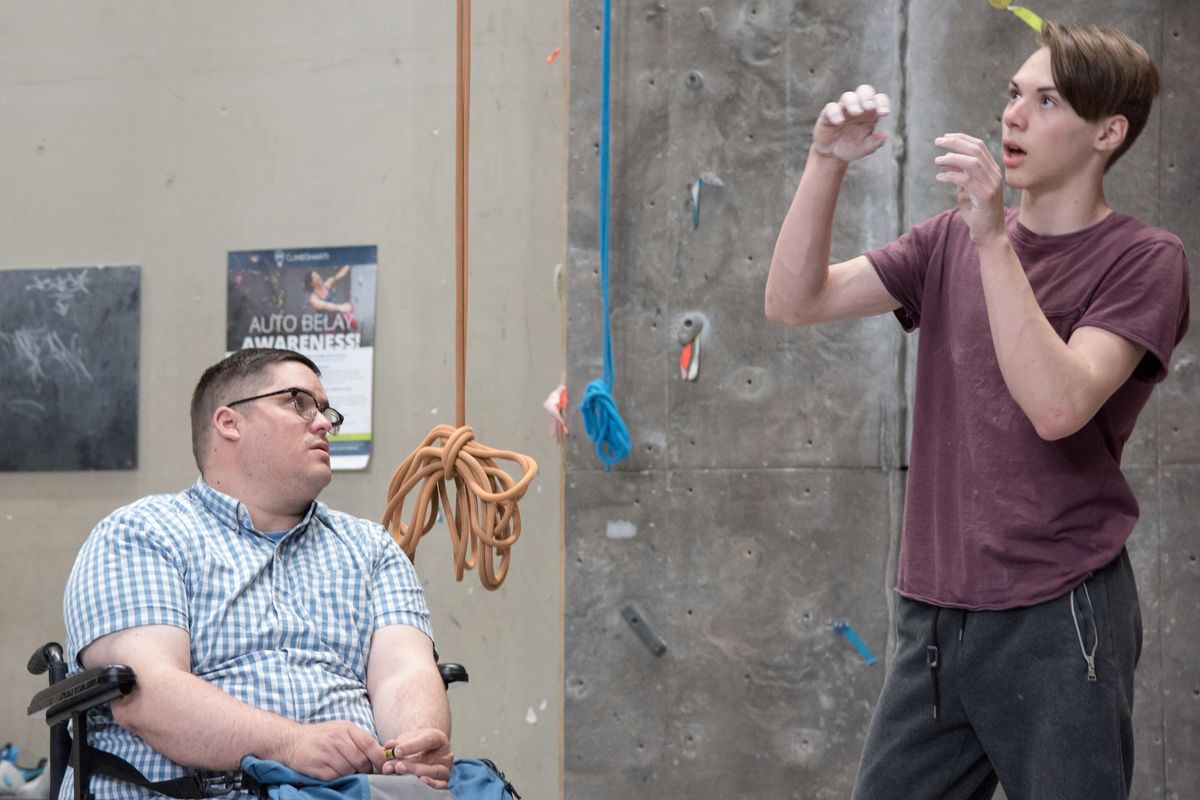 Josh Jackman, left, listens as Aaron Dubbels explains a sequence of climbing moves on Monday May 20, 2019. In 2007 Jackman was hit by a drunk driver nearly dying. Since then, Jackman has trained several generations of climbers in the Spokane area. His coaching focuses heavily on the mental aspects of climbing. (EEli Francovichh / SR)

When Bloom was 4, she saw a PBS Kids special on rock climbing.

They headed to the gym that night. That’s when she met Jackman. At the time, he was running a youth climbing program called Spider Monkeys, which he started in 2002.

“I got onto the wall and I started crying,” Bloom said.

But she was drawn to climbing and kept coming back. Eventually, she stopped crying every time she roped up.

“I think I owe that to Josh Jackman,” she said.

Jackman said he started the Spider Monkeys program because he liked working with kids, and he often noticed children running around the gym while their parents climbed.

Teaching kids was one step Jackman took toward making climbing a viable career. The success of the Spider Monkeys program, which still exists, was one of the reasons he was offered the manager job at the gym in 2007. It was good timing. Indoor climbing was starting to take off, in Spokane and nationwide, and more people were coming to Wild Walls.

“I was extremely excited,” Jackman said. “My plan was to take the gym into places it had never been and do the best job ever. And carve out a financially sustainable life out of it.”

But that evening a dozen years ago, “things changed.”

He’d started early, smelling of beer when he got home from work, according to an affidavit filed by Temple’s wife in 2008.

The couple went to a friend’s house, where he drank more beer before going to the bar at the now-closed Rancho Los Potrillos in Suncrest. Temple continued to drink, and according to his wife had 10 shots of tequila, plus numerous beers, over the course of the evening.

Eventually, he got sick and vomited on the table. Humiliated, he left the bar and said he wanted to drive home. His wife refused to get in the car with him.

He peeled out of the parking lot and into the night.

Minutes later, Jackman was less than a mile away from his father’s home. As he started up the final hill – Big Sandy – he noticed a car driving erratically on the winding road.

He slowed down and began to pull over, but the physics of the situation had been set. Temple drove his 1994 Mazda MX3 straight even as the road curved. He slammed into Jackman’s 1995 Oldsmobile Cutlass going nearly 60 mph. Jackman had slowed to 30 mph.

The force of the impact broke both of Jackman’s feet, his right femur and his left hip socket. He fractured his pelvis, burst three vertebrae and broke both bones in his right forearm.

He was flown to MultiCare Deaconess Hospital, then Harborview Medical Center in Seattle. After numerous surgeries, doctors removed his gallbladder and 3 feet of his small intestine. He was placed in a chemically -induced coma and pumped full of fluids to mitigate the trauma.

He remained that way through the summer and into the fall.

“I remember my dreams in coma very vividly,” Jackman said.

In the dreams, he was confused and lost. He didn’t know where he was, although he had a nagging feeling that he was in Seattle. But why Seattle?

For Jackman, a methodical planner and someone who is always trying to understand the why of things, not knowing was “maddening.”

“So I woke up, Mom is there and my brother is there. and my Mom is like, ‘Hey, you were in a bad car accident. You’re in Seattle,’ ” he said. “And right then it was the most catharsis I’ve ever had.”

Getting comfortable with the tide

But once he returned from Seattle and started the process at St. Luke’s Rehabilitation Institute in Spokane, the extent of his injuries became clearer. By the end of November, it had been four months since the accident.

When he finally left at the end of January 2008, he was in a wheelchair.

His mom drove him home.

“That was probably when things started to get difficult,” he said.

In a way, Jackman was lucky. He’d already suffered from depression prior to his accident and had gone to therapy, so he had some emotional tools at his disposal.

His experience climbing helped him navigate the recovery and subsequent realization that he would never climb again, or do many of the things he’d loved. He poured himself into his physical therapy, approaching it much the way he’d approached climbing, cooking and martial arts: step by methodical step.

“His identity was very physically motivated,” said Ben Jackman, his brother. “I think he always felt like a very capable, strong person. I think directly after the accident, he was so broken. I definitely know there were some dark days.”

Ben Jackman watched his brother shift his focus, away from the physical and toward the mental.

During an interview Monday, Josh Jackman recounts the first time he moved his right leg after the accident. It was a big accomplishment, one that still brings him pride.

Today, Jackman can walk about 100 feet without a cane or walker. Although he has nerve damage in his legs, he can get in and out of his car and, since 2010, has driven himself.

But he will never climb again. He describes the loss and associated sadness as a wave. Many days are good. But then it will swell again, and he’ll be reminded of the things he can no longer do.

“It’s still like, ‘Man, I wish I could do this or do that,’ ” he said. “Stuff arises. I’m just more comfortable with the tide now.”

In its own way, Jackman’s accident, as he calls it, had made him the climbing coach he is today.

In 2009, Jackman approached three younger Spokane climbers and asked them if they’d want him to coach them.

They said yes and began training Sunday nights. It started as a way for Jackman to stay connected to climbing. It has grown and changed since, becoming its own distinct thing.

His coaching focuses on the mental side of climbing (although he is a good technical coach). On learning to live with the self-doubt, fear and anger that can arise.

Jackman gets to know his climbers and their strengths, weaknesses and quirks.

Milo Miller, 16, calls himself a social climber, one who is apt to spend most of a climbing session talking to friends.

Jackman, seeing that, often tells him he’s not allowed to talk throughout a whole workout.

That focus forced Miller to confront the anger that would flare up more often than not.

“I would get furious at the wall. I was a really angry climber and I just could not handle it,” Miller said. “And even in this last year, he’s helped me so much with that. Teaching me how to control myself, and compose myself during competition. It’s just been incredible for me.”

Bloom agrees, noting that Miller has matured in the time she’s been his teammate. That mental training is Jackman’s goal. He’s interested in the climbers he coaches as people, not just athletes.

Once after Bloom performed poorly in a climbing competition, Jackman called her up. He knew she was distraught and beating herself up, so he invited her to go fishing.

“We went fishing for three hours. We did not talk. We just went fishing,” she said. “(He has) complete devotion to his athletes, not only as athletes but as people.”

Because he can’t show his climbers how to do something, they learn a level of self-reliance and confidence that they might not otherwise.

Phil Sanders, Jackman’s longtime friend and a climbing instructor, has seen Jackman reel climbers back from the pain of failure many times.

“His strength comes through when kids need to get back on the horse,” Sanders said. “He’s just right there with the right thing to say to you.”

That’s all intentional. Jackman said he started coaching with the goal of creating a “space where we held each other accountable based on our character and conduct, and not on how good we are at climbing.”

Jackman has coached some excellent climbers.

“His kids go to competitions, and they pull hard and they place,” Sanders said. “The coaching he’s been doing for kids is clearly working.”

It’s largely been a labor of love. This year is the first year that Jackman has charged money for his time and expertise.

Jackman also has had a handful of private clients, including the late Jess Roskelley, a professional climber from Spokane who was killed climbing in Canada in April.

Allison Roskelley, Jess’ wife, said Jackman pushed Roskelley beyond his perceived mental limits in the year or so they worked together.

“Josh is able to read people and key in on pushing themselves,” she said. “And he’s just a pleasure to be around.”

For Bloom, Jackman’s skill and power as a coach goes beyond what he says. Instead, she said, it’s the example his life and story set for his climbers and friends alike.

“If Josh can be here, I can do this,” Bloom said. “Knowing that our coach has overcome barriers that we can’t imagine, it’s an inspiration.”