In front of the Spokane County Courthouse, a loud train whistle blows.

Those are the sounds of the Steamdog Express, a classic hot dog stand with a train-themed flair that has been stationed in front of the courthouse Monday through Friday since September.

“There’s just a certain sense of camaraderie out here, because a lot of people don’t want to be here,” said Quinn, the stand’s owner. “Everyone is trying to make the best of it, and if I can give them some good food in their belly, then maybe they can leave here with a good taste in their mouth.” 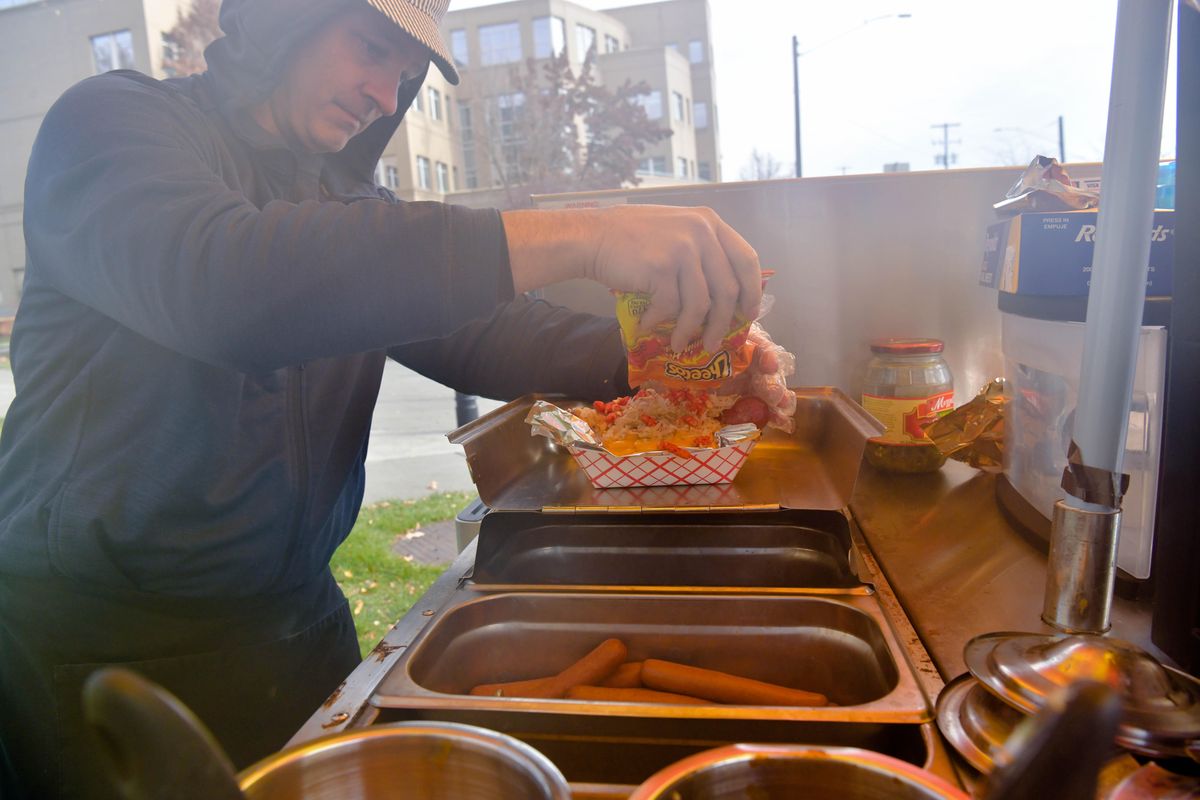 “I feel like it’s important to offer an option, you know, and vegans get tired of eating salads I hear,” Quinn quipped.

Quinn, 42, ended up selling hot dogs after giving up his job at Facebook in search of a simpler life, working for himself in his hometown.

After growing up in Spokane Valley, Quinn moved to Seattle in his early 20s to attend art school. When he realized no one was looking for art directors, he decided to go into information technology and ended up with a job at Google in Seattle.

Quinn was the tech guy for the tech guy, he said, servicing everything from conference rooms to hard drives on the Google campus.

“It was our job to make sure that they could stay running to keep the company running,” Quinn said.

After a few years, Quinn was promoted to regional manager. With the promotion came a move to Austin, Texas, but being a manager wasn’t exactly what Quinn had expected.

He started becoming frustrated with “the corporate mentality” until one day he came out of a meeting, looked out the window and saw a guy selling tacos.

“I saw a guy working a taco truck and he just looked so happy and he was smiling and serving food to people,” Quinn said. “I’m like, That guy has got it right. He knows what he’s doing.”

That got Quinn’s “noggin joggin’” on what food he could be selling with a smile.

“I thought, ‘Well I can probably do hot dogs. No one is going to expect me to be a gourmet chef if I’m serving hot dogs,’ ” Quinn said. “People just kind of love them because they know exactly what they are.”

After crunching some numbers and looking at profit margins and mobile food vendor regulations, Quinn decided to give it a go. But not before giving the tech world one last shot.

He moved from Google to Facebook, out of management and back to a regular technician job.

A year later, he decided he’d had enough and moved back to Spokane to be closer to his aging parents.

He bought a hot dog cart, paid more than $600 to be inspected by the health department, got licensed and started creating his menu.

“People seem to respond to certain things, and I kind of see what people say and what’s selling a lot,” Quinn said. “This is probably the fourth iteration of the menu I’ve gone through in the two months that I’ve been open.”

That menu will be changing soon, though, with Quinn adding breakfast to his repertoire.

In about two weeks, Steamdog will open up at 7:30 a.m. to serve biscuits and gravy, pancakes, cinnamon and sugar pretzels, and pigs in a blanket.

Since opening, Steamdog has only been shut down a few days whenwinds were strong enough to blow toppings right off a hot dog. Quinn posts updates on his Facebook page when weather gets in the way.

With winter coming, Quinn still plans to be outside blowing his whistle and chatting up the customers.

“I love it, even being out here on a cold day. I’m so happy. I’m not in an office. I don’t have any boss. I don’t have any HR or corporate policies or any of that garbage to deal with,” Quinn said. “If I screw up or if I have a bad day, it’s all on me. I feel free for the first time in my life.”