A GRIP ON SPORTS • Let’s see. It’s Thursday, right? Is “Cheers” still on? Of course not. Even if it were, it would probably be on Netflix or Hulu and would include Cliff riffing on subjects he couldn’t talk about back in the day. Hey, I know. Let’s don our Postal Service uniform and riff on a few little-known subjects ourselves.

• Defending national champion Virginia opened its season last night in Syracuse, not only playing on the road – the first national titlist to open its season away from home since UCLA in 1967 – but playing a conference game as well.

At least Tony Bennett didn’t forget to pack his defense. As if he ever would. 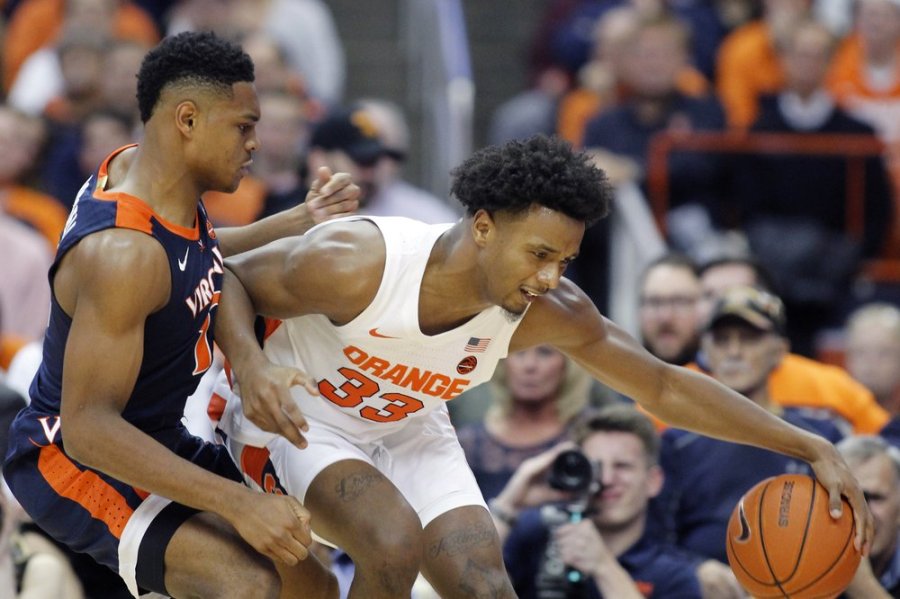 The Cavaliers only scored 48 points – Washington State fans remember those days, right? – but they won by 14. Yes, you read that right. UVA held Jim Boeheim’s team to 34 points … for the entire game.

WSU fans remember those days too, I’m sure. Which is part of the reason they are excited about Kyle Smith’s debut tonight. When you read Theo Lawson’s story on Smith and preseason practice, keep in mind one crucial element.

By the time Tony took over from his dad Dick Bennett at Washington State, he didn’t have to spend an hour each practice instilling defensive principles. The players already knew what was needed, what was expected. That work had been done.

Smith is still in the process of changing the paradigm of success around Pullman and that takes time.

• Speaking of what’s going to take time, I give you the Gonzaga Bulldogs. Yes, there is a filthy amount of talent on the McCarthey floor. Young talent. Older, but new-to-the-program, talent. It will take more than a month or so of preseason practice to meld it all into a cohesive unit.

And not to beat a drum that resides permanently in my symphony, but it takes even longer to build a cohesive defensive unit. When you read Jim Meehan’s rewind of their season opener, try to remember how long some of the current squad has been on campus. Heck, some of them might still have trouble finding their way to Safeway without Anton Watson’s help.

Back when I was heading up the S-R’s high school sports coverage, I spent some time with the Tigers’ former defensive coordinator. Turns out, we had a connection.

See, when I first started out in the business, I was in charge of coverage of the Sunset League for Southern California’s Orange County Register. This was back when Ronald Reagan was president. That was a great high school football league, with at least a dozen kids each year that went on to play Power 5 football, though it wasn’t called that then.

Anyhow, one of the teams in the league was Westminster High, a school with little in the way of football tradition. The Westminster coach when I was covering the league? You guessed it. Jeff Reyburn.

I must admit, however, I spent most of my time writing about Edison and Fountain Valley high schools (they played twice in 1980 before I was covering them and drew 55,000 people combined to Anaheim Stadium; think about that number) so Westminster sort of fell through the cracks.

WSU: We start today with a football link, one with a Spokane connection. Theo writes about the Pac-12’s leading tackler, Evan Weaver, who played at Gonzaga Prep. … As we linked above, Theo also has a story on the Smith era getting underway tonight against visiting Seattle U, coached by former Eastern head coach Jim Hayford. … Finally, Theo answers a bunch of questions in his sort-of-weekly mailbag. … Elsewhere in the Pac-12, just who will win this week? … Washington would love to have its wide receivers burn Oregon State’s defense, something that’s happened quite often this season. … Jake Luton has not received enough credit for his play this year. … Oregon’s CFP ranking can be debated, but not by the Ducks’ coach. … Utah has a good chance to move up. … Colorado will be challenged by Stanford’s offense. … USC is announcing today Cincinnati’s Mike Bohn as its new athletic director. Is Urban Meyer as football coach next? The Trojans face Arizona State this Saturday. … In basketball news, Stanford won its opener over visiting Montana. … UCLA relied on its defense to get past Long Beach State. … Arizona had little trouble with visiting Northern Arizona. … Is Washington being overlooked?

Gonzaga: Tuesday’s win is the subject of Jim’s rewind, which we also linked above. … Jim Allen has more on the women’s nonconference schedule, including some of the tough opponents that await the group.

EWU: Beat writer Ryan Collingwood joined Larry Weir for the latest Press Box pod which also includes some Idaho talk. … The soccer team won in the Big Sky Conference tournament and moved on to the semifinals. … Around the Big Sky, Weber State is the conference’s top-ranked team. But not its only one.

Whitworth: The Pirates, after being snubbed by the NCAA last season despite more than 20 wins, have improved their nonconference schedule. They open Friday night with a tournament at home. Dan Thompson has a preview.

Preps: The state cross country championships are this weekend in Pasco. Ryan has a preview of all the races while Steve Christilaw writes about a solo U-Hi runner. … We linked this above as well, but LC will be looking for a new football coach next season. … We have a district volleyball roundup and the news Washington had to move the 2A tournament at the last minute.

Seahawks: Josh Gordon is getting another chance. Talent earns that opportunity in the NFL. … The Hawks let another drafted wide receiver go. … The Seahawks have been winning the close games. I credit Russell Wilson.

Sounders: Seattle is back in the MLS Cup. It’s a surprise for some of them. That includes Stefan Frei.

• I almost forgot to write something here. In fact, the first time I saved this column, this spot was blank. I’m sure no one noticed. Or cared. After all, all I wanted to share was the fact my back hurts. Until later …