A GRIP ON SPORTS • Everyone ready for Saturday’s huge college football games? And for Alabama vs. LSU? Or Minnesota facing Penn State? It’s that type of day, what with big games around the nation and every local team involved in a key one as well. Welcome to mid-November.

• You want to see Washington State in a bowl game next month? Better be rooting hard for a Cougar win this afternoon in Berkeley. The road is a lot easier with a victory today, that’s for sure. 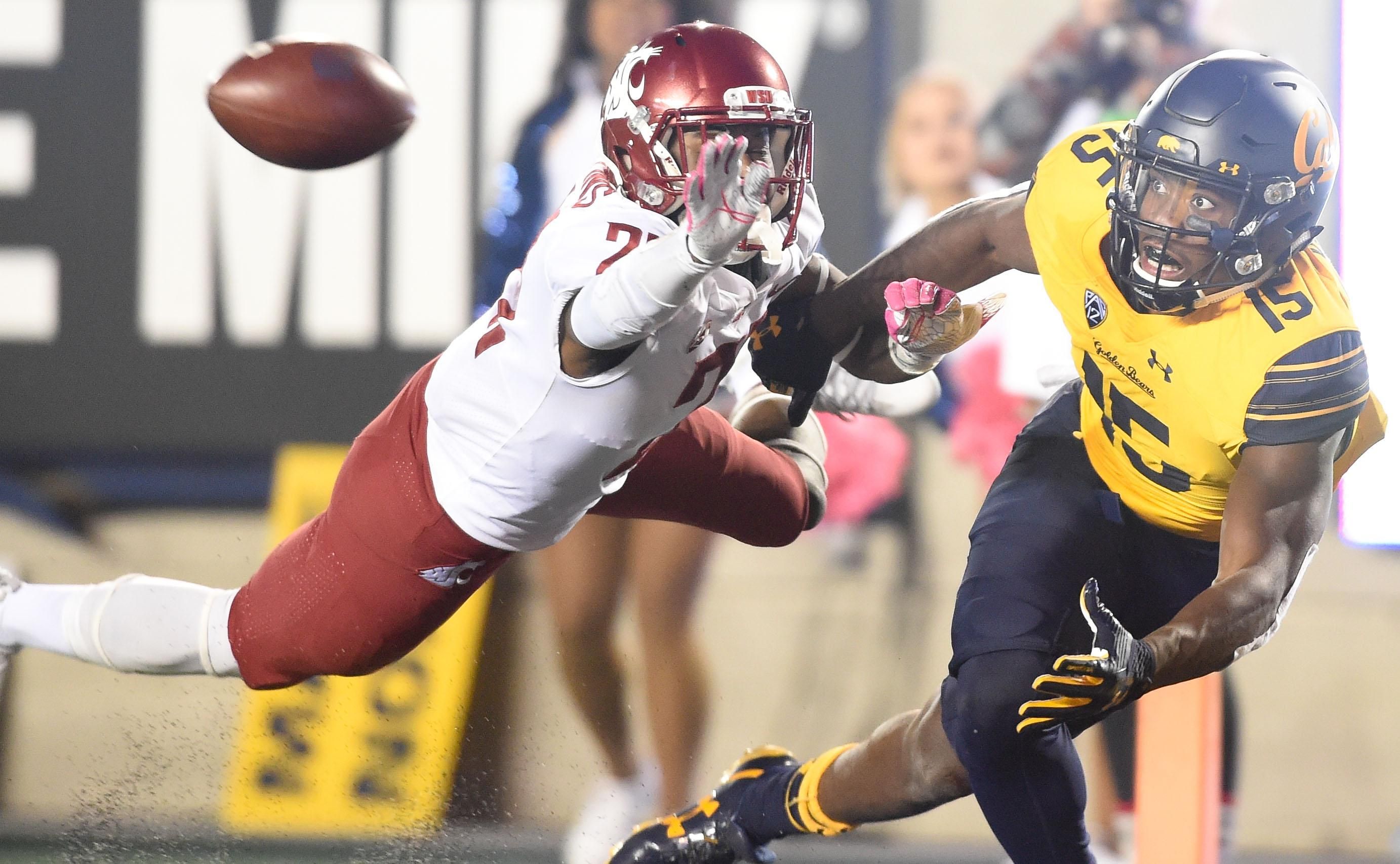 Want to see Whitworth in the NCAA Division III playoffs down the road? Better be rooting your toes off for a Pirate win this afternoon at the Pine Bowl. Only with a win over Linfield today will the Whits make the postseason.

Want to see Eastern and Idaho finish the season with a flourish? Then it has to start today, what with the Eagles in Pocatello with a good shot at the season’s first road win and the Vandals traveling to one of the Big Sky leaders, Montana.

It makes for a more-than-decent Saturday on the local scene, though, with just the Pirates playing at home, it’s more of a catch-the-game-on-the-radio kind of day. That’s OK too. There are probably some leaves that need to be raked.

But the game everyone wants to see pits top-ranked LSU traveling to second-ranked Alabama. That game kicks at 12:30. You can expect a SEC lovefest on the CBS broadcast, but that’s different than every Saturday how?

There are other games of interest, of course, though the day is missing one element we have come to rely on: #Pac12AfterDark.

For some reason, there is no late Pac-12 game this week. The networks decided to push the late game to last night. Maybe the powers that be knew everyone needed a lot of rest for today, so they decided to broadcast some visual Sominex, Washington’s 19-7 victory over Oregon State. Talk about sleep-inducing.

• With college football in late-season mode, college basketball is yielding the stage for the most part today. There are just four top-25 teams available to watch, including the eighth-ranked Bulldogs.

Gonzaga hosts Arkansas-Pine Bluff, another of its trio of ease-into-the-season opponents that continues next Tuesday with North Dakota.

If none of the late-night football games hold your interest, 15th-ranked Oregon is hosting former GU assistant Leon Rice and Boise State tonight, so there is some after 8 p.m. entertainment scheduled.

• You may realize Washington State football and Gonzaga basketball overlap this evening. Yes, they do.

Which makes a decision necessary, at least here. Which game to cover for the S-R?

After hours and hours of discussion among myself and the sports department brain trust … well, to be honest, it was a couple short phone calls … sports editor Ralph Walter determined the Cougar game was the one to concentrate on. So we will have our TV Take based on the Pac-12 Networks’ broadcast. I’m sure the Gonzaga crew is grateful for the silence.

WSU: California’s remodeled Memorial Stadium has been a house of horrors for the Cougars’ offense recently. It probably won’t be any different this afternoon. Theo Lawson looks back and ahead in this preview. … Theo also has his keys to the game and his pick to win. He’s got the Cougars in a tight one, relying on their new-look defense to shut down the Bears’ injury-riddled offense. Speaking of that, he passes along Cal’s starting quarterback, which had been something of a mystery this week. … Luke Falk turned out to be the New York Jets’ sacrificial lamb in more ways than one. Theo has the news the former WSU quarterback has filed an injury grievance against his last NFL employer. … The volleyball team won last night in Corvallis. … Elsewhere in the Pac-12, we all knew this, right? … Other than Salvon Ahmed’s 60-yard third-quarter touchdown run, Washington’s win at Oregon State was a boring, defensive affair. The Beavers defense did enough, but their offense was awful. Then again, maybe it was the Husky defense. … The USC game today in Tempe is supposed to be a matchup of young quarterbacks. But Arizona State may not have its freshman. Jayden Daniels is a game-time decision. … Colorado hasn’t won in more than a month. Stanford would like to keep it that way. … There was basketball yesterday, including Colorado and Arizona State meeting in China in a nonconference game. Yes, a nonconference game. Colorado won. … The Huskies had a big win, rallying past 16th-ranked Baylor in Alaska. … USC pulled away late to top Portland. … Utah broke an NCAA record in its rout of Mississippi Valley State. … As we mentioned above, Oregon will host Boise State. The Oregon women, ranked No. 1, also host the U.S. National Team. … Arizona will host Illinois on Sunday.

Gonzaga: The Bulldogs should have little trouble this afternoon, but that doesn’t mean there aren’t things to get out of the contest. Jim Meehan tells us what GU’s goals are as well as highlighting the key matchup. … Around the WCC, BYU welcomes an old rival from its old conference. … A transfer will be eligible for USD this season.

EWU: The Eagles not only go on the road looking for their first road win of the season (Ryan Collingwood has the usual preview of the Idaho State contest) but the basketball team also travels for the first time, facing former coach Jim Hayford and the Seattle U. Redhawks. Ryan has a preview of that game as well. … The soccer team got an overtime goal from Maddie Morgan, defeated Sacramento State 2-1 and moved into tomorrow’s Big Sky Conference title match. … The women’s basketball team lost another road contest. … Elsewhere in the Big Sky, Weber State has that conference game against no-longer-member-of-the-conference North Dakota. … Montana State faces off with Northern Colorado in a key game for the Bobcats. … UC Davis travels to Portland State. … In basketball, 17th-ranked Utah State hammered Weber State, 89-34. … Ryan Looney picked up his first win at Idaho State on Thursday night.

Idaho: Peter Harriman has a preview of today’s game in Missoula. The Griz have a legitimate playoff shot with Jerry Louie-McGee leading the way.

Whitworth: The Northwest Conference football title usually comes down to the Pirates’ matchup with Linfield and this year is no different. Dan Thompson has a preview of the battle that will be broadcast locally on SWX, starting at 12:30 p.m. … The basketball team began the Damon Jablonski era last night, defeating Claremont-Mudd-Scripps in the Tip-Off Classic at the Whitworth Fieldhouse.

Preps: It was a busy Friday night in football, with G-Prep and Mt. Spokane hosting playoff contests. The Bullpups rolled over Hanford at home – Ryan has the game story – while the Wildcats had their way with Kamiakan – Dave Nichols has that coverage. … There are also photo galleries from Tyler Tjomsland (the G-Prep game) and James Snook (the Mt. Spokane contest). … We also can pass along a roundup of all Friday’s other games.

Chiefs: Everett has had its way against Spokane in the Arena thus far this season. Kevin Dudley has this story on the latest game, a 4-3 Silvertip win last night. … Around the WHL, Portland lost to Vancouver.

Seahawks: The Hawks don’t play until Monday, which gives everyone a day to watch other games. … DK Metcalf is already in Russell Wilson’s good graces. … Jason Myers appreciates his teammates’ support.

Sounders: Sunday’s MLS Cup final should bring out the best in Seattle’s soccer fans. … Jordan Morris was once a Sounder fan. Now he’s one of their stars. … It’s time for the obligatory bet.

• We want to give you an early heads-up. We won’t be here Monday morning. We have an early appointment on the North Side of town, which will preclude us putting together the column that day. And, yes, I know, you want to know what I think will happen in San Francisco that night. You’ll have to learn to live with disappointment. Until later …