Astronaut Anne McClain fondly remembers peering out the expansive bay windows of the International Space Station’s Cupola and watching the Earth fly by below her while she played music from the iPod that had to be shuttled to her on a different launch.

She said those windows were her favorite part of the space station.

“You have this amazing 360-degree view,” said McClain, a 1997 Gonzaga Prep graduate and U.S. Army lieutenant colonel. “You see the Earth coming this way and underneath your feet and out behind you.” 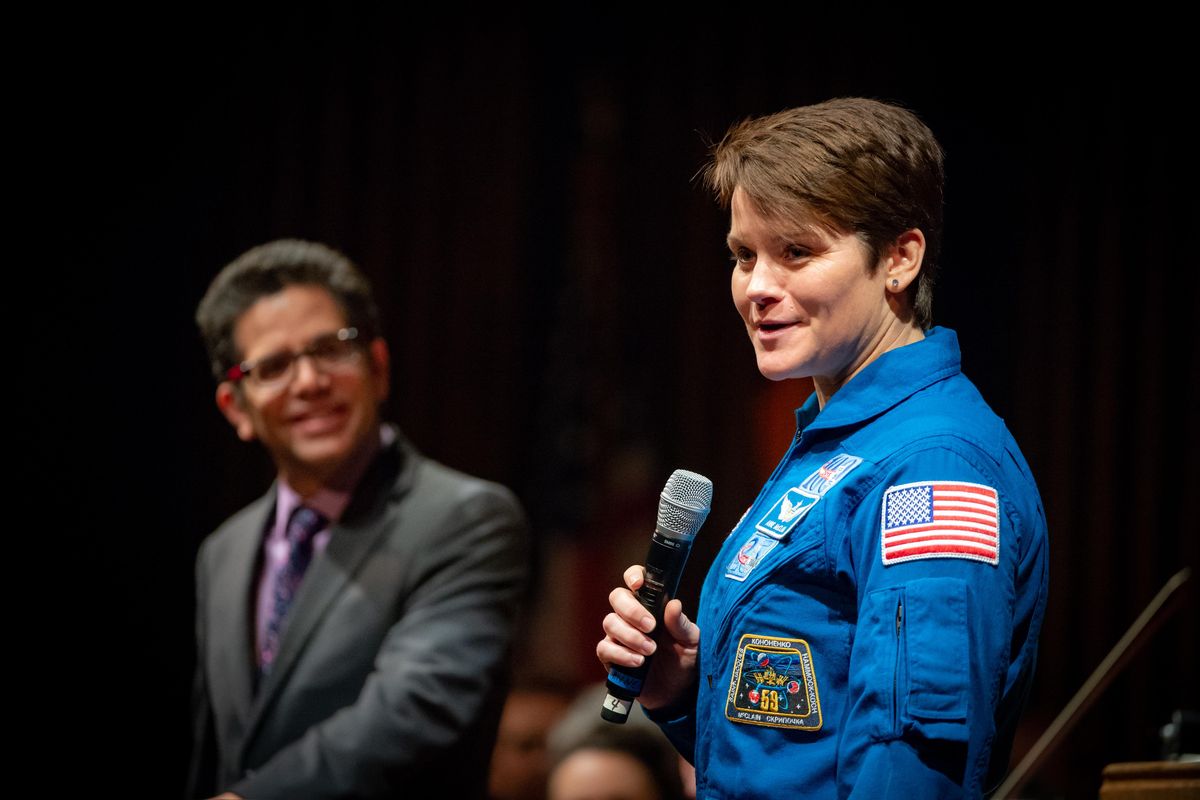 Astronaut Anne McClain speaks onstage during the Spokane Symphony’s “50th Anniversary of the Moon Landing” at the Martin Woldson Theater at the Fox on Sunday, Nov. 17, 2019. McClain was the guest speaker, along with Jose Francisco Salgado who creates visual effects from night and lunar photography, while Roger Kalia conducted the Spokane Symphony Orchestra’s music. (Libby Kamrowski / The Spokesman-Review)

Two Spokane Symphony shows at the Martin Woldson Theater at the Fox over the weekend — where three scenic space films by astronomer and experimental photographer Dr. José Francisco Salgado played during space-themed orchestral music — brought people from McClain’s hometown about as close to her experience as possible without donning flight suits of their own.

“It makes me feel like I’m back at the space station,” McClain told the crowd during Sunday afternoon’s performance.

McClain said she and Salgado geeked out about their camera settings while trading notes about time-lapse and night sky photography.

“Geeks go to space,” McClain said as the crowd laughed.

Planning for the two concerts celebrating the 50th anniversary of the moon landing, part of the symphony’s monthly Masterworks series, started back at the beginning of this year. Then, about three weeks ago, organizers learned McClain would be available for discussions with Salgado before each film about her experience spending this past December to June as a flight engineer aboard the International Space Station.

Salgado has shown a selection of his films during more than 200 orchestral concerts as a part of his nonprofit’s “Science & Symphony” project that started in 2006, but Spokane’s was only the third show to feature an astronaut on stage. The orchestral concerts were both sell-outs, also a rarity at the Fox in the past decade.

The first film shown pieced together Salgado’s own time-lapse footage of the moon from around the globe set to “Clair de lune,” composed by Claude Debussy.

“It’s the same moon for everyone around the world,” said Salgado, but he has never seen it from space.

McClain said her first experience watching the moon set from the ISS was while she was brushing her teeth at a spot right next to the bay windows of the station’s Cupola, a domed observatory area providing panoramic views for experiments and docking.

“Many videos and photos were taken while an astronaut was brushing their teeth,” said McClain, so a camera was always stored nearby.

The next film, “Around the Earth in 90 Minutes,” showed different views from the space station as it rotated around the planet while the symphony played “Un bal” from “Symphonie fantastique” written by Hector Berlioz. The station orbits the Earth every 90 minutes, giving Salgado’s film its name.

McClain said she’ll never forget her first spacewalk: She came out from a hatch headfirst on the side of the ISS facing the Earth and had to reorient herself.

The Earth “was the largest thing I’ve ever seen in my whole life,” said McClain, who took two spacewalks for a total of about 13 hours during her 204 days in space. “I just see feet and the entire Earth.”

Astronauts can watch the sun rise or set every 45 minutes while the ISS travels at more than 15,000 miles per hour, McClain said. They also watch the tides go in and out and natural disasters unfold over hours, as well as coastlines change and glaciers melt from climate change during the course of multiple trips to space. The views showed how everyone on Earth is connected from a distant perspective.

“When you get out in space and look back at where you’re from, you realize how small and fragile it is; how we’re really all in this together,” she said.

The third film, “The Planets,” set to the orchestral suite of the same name composed by Gustav Holst, was a collection of shorter films depicting the other seven planets through digitally created visualizations and images from space agencies, as well as historical illustrations, like drawings by Galileo.

The film is “a synthesis of what we have achieved as solar system explorers,” Salgado said.

“The Planets” film was Salgado’s first, spurred by a request from the Chicago Sinfonietta in 2005 to create a visual backdrop for a performance of the orchestral suite. At the time, Salgado was an astronomer at the Adler Planetarium in Chicago and had been applying his skills in scientific illustration and photography to create astronomy-themed artwork since 2000.

He and two others founded an educational nonprofit, KV 265, in 2010 with the mission to inspire people to learn about science through art. This week Salgado will visit Chase Middle School and Spokane Falls Community College to talk about science and music.

“When we go into schools, the the idea is to motivate kids to become multidisciplinary individuals,” Salgado said.

On Wednesday, Salgado will be back at the Fox for a free event highlighting his photography and filmmaking processes.

Joe Bruce, who has visited local schools as a NASA Solar System Ambassador for 11 years and had a collection of space memorabilia on display outside the theater, said he and Salgado’s programs go hand-in-hand.

“Just the right word from me or anyone else could inspire someone to do something really cool,” he said.

James Krueger, 6, said the performance was similar to how he’s been learning about constellations and planetary orbits in school.

“I want to go to space or invent something that can go to space,” he said.

Salgado said he first became interested in astronomy and space exploration when he was in grade school.

“I was fascinated not only by the photos of the moon, but the technology that took us there,” he said.

Then he bought his first camera in eighth grade, and the first thing he did was point it toward the sky to take photos of the solar system. He later developed a passion for music while learning to play the bass guitar.

“What I didn’t know was all these paths were going to merge,” said Salgado, who has produced 11 films to date.

McClain said she doesn’t remember the exact moment she wanted to become an astronaut, but she knows it was sometime around preschool. She later wrote a novel in elementary school about blasting off into space.

“The more that I learned about it as I grew up, the more I liked it,” she said.

Paige and Ella Larsen, 9 and 5, met McClain backstage, where the astronaut said the rocket that took her to the ISS was about 30 stories tall.

“That would be humongous,” gasped Paige, who said she has some interest in space exploration herself.

By the time she reached NASA in 2013, after graduating from West Point and working as a helicopter test pilot, McClain realized how creativity, like in artistry, becomes a factor in aerospace.

“We don’t have an answer to everything,” she said. “We have to create something with engineering.”

Sunday evening, McClain visited St. Stephen’s Episcopal Church to speak to local students and church members about chasing their dreams. A number of parishioners know McClain personally, and the church sent a letter to NASA approving her appearance.

Jonah and Eleanor Newman, 5 and 2, wore a space helmet and a space suit to a potluck before McClain’s speech.

“They’ve been talking about it nonstop,” said their mother, Stephanee Newman.

Anna Osborne, 12, said being an astronaut is among some of possible professions in her future. She’s also considering becoming a teacher or a police officer.

“It may be a big world, but you can pursue big dreams,” she said.

Osborne said McClain’s story motivates her to pursue her dreams, whether she decides to be an astronaut or not.

“I want kids to know if you put the work in and you follow your passions, the world really is wide open,” McClain said. “Hopefully I can inspire not just kids, but adults. It’s never too late to follow something that you’re passionate about.”

McClain said her journey to becoming an astronaut has come full circle now that she gets to be on stage and inspire people to pursue their dreams. She remembered the first time she went to the Fox. It was a movie theater then and she saw “E.T.”

“I was a kid sitting out in the seats scared to death of E.T., probably,” she said.

A moon landing is at the forefront of McClain’s mind now that NASA has set a goal for another mission by 2024, McClain said. And at some point future low orbit flights, like the 8 minute and 48 seconds it takes to go 250 miles in a rocket to the ISS, will be contracted out to companies like Boeing and SpaceX. That way, McClain said, NASA will be able to focus on deep space exploration and missions to Mars.

McClain said the fact that one of the violinists in the symphony was holding a handmade violin from the 1700s a few feet away from someone who just got back from space was a testament to what humans can achieve.

“It’s all based on creativity, finding the unknown,” McClain said.