They say sound doesn’t travel through space, but that theory didn’t fly Wednesday morning at the Martin Woldson Theater at The Fox.

As hundreds of Spokane-area students sat tightly in their seats, the Spokane Symphony carried them to Mars and Jupiter and the farthest reaches of their imaginations.

For an hour, the art deco interior of the Woldson felt like a spaceship and the ceiling lights like so many stars as the symphony accompanied astronomer Jose Francisco Salgado and his show of visual special effects.

“Blurring the line between work and play, that’s the message I want to send,” said Salgado, who is spending the week in Spokane to spread the word.

The vehicle is Salgado’s film “The Planets,” which is set to the seven-movement orchestral suite by the same name composed more than a century ago by Gustav Holst. Each movement is named for a planet.

Students got a special treat at the beginning of the show, when the musicians, led by assistant conductor Jorge Luis Uzcategui, played “A Child’s Guide to the Symphony.” 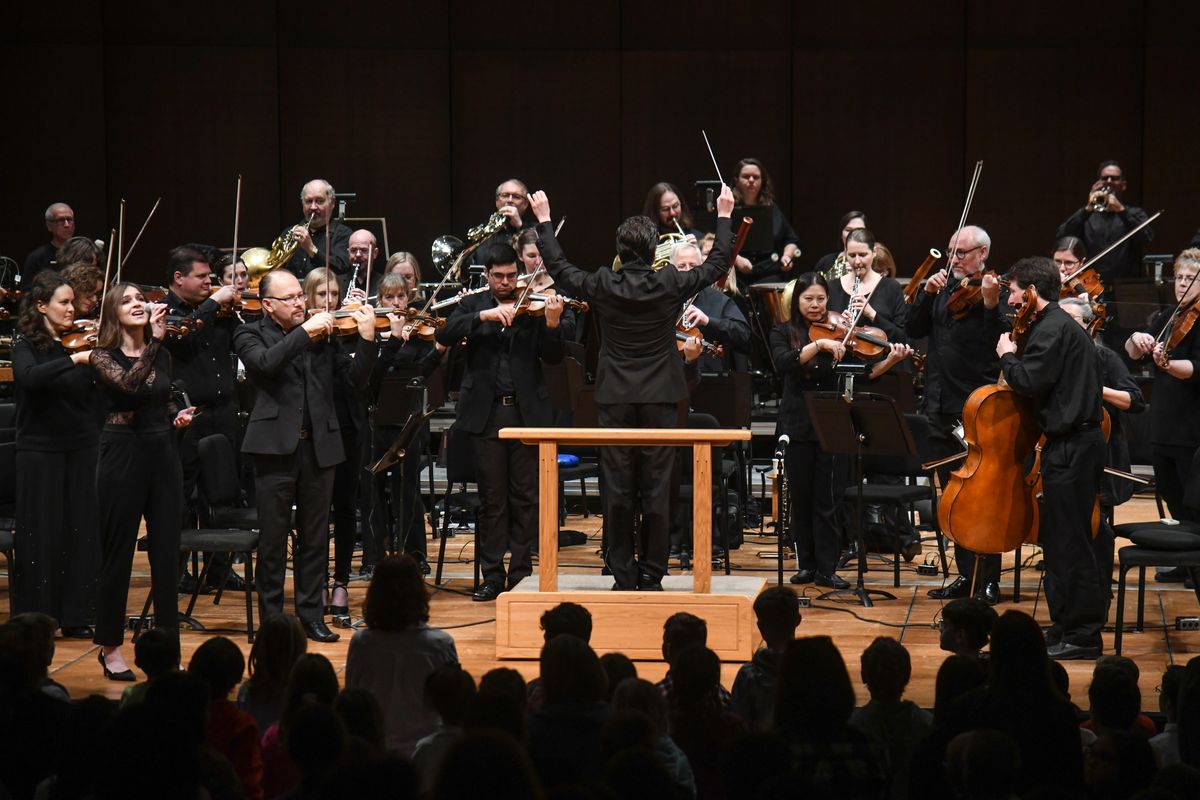 Spokane Symphony’s Jorge Luis Uzcåtegui conducts the National Anthem during the Fourth and Fifth Grad concert, Wednesday, Nov. 20, 2019, at the Martin Woldson Theater at The Fox. (Dan Pelle / The Spokesman-Review)

Sitting near the front row were students from Betz Elementary in Cheney.

Said one student, “I want to learn how to play all the notes of my trumpet … but I’m also excited because I love the planets.”

A few feet away, front and center with the best seats in the house, sat 50 students from the East Farms STEAM (Science, Technology, Engineering, the Arts and Mathematics) magnet school.

If ever an event was crafted for them, this was it.

“This is very exciting,” said teacher Lucien Saurette, who was dressed in suit and tie for the occasion and knew what to expect after he watched Saturday’s show.

“I’ve been telling the students how the science and the art are being melded into this wonderful concert,” Saurette said.

Saurette’s class is studying sound science in fourth grade and also all the instruments, and next year they’ll have the option of taking band or orchestra.

“So now they get to see firsthand what it sounds like,” he said.

As for the science component of Wednesday’s show, Saurette said, “This is going to take them to another dimension.”

A few moments later, Salgado and the symphony did just that.

In the Mars segment, Salgado began with the earliest depictions of the planet from Galileo and carried them forward to the Mars Rover and digitally created visualizations and images from space agencies.

“It’s not science fiction,” Salgado said earlier this week. “These are things we have accomplished as space explorers.”

The images from Jupiter and two of its moons, Io and Europa, were taken by the Galileo spacecraft in the 1990s. The images of Jupiter’s Great Red Spot came to life along with the pockmarked surface of Io.

Next came images of ice-covered Europa – coincidentally the same day that scientists reported that the moon contains water vapor.

Perhaps Europa once supported life like the fictional ice planet Hoth from “Star Wars.” That’s yet to be determined, but the entire theater came to life for the final number: the theme from the hit movie series.

Heads perked up throughout that final number and the entire audience applauded.

Then they came back to Earth, richer for the experience.