PULLMAN – So, Max Borghi, any guarantees for the Apple Cup?

Hey, the Washington State running back had great fun as a mic-drop Joe Namath last week, so why not now?

No take it to the bank? No bet the farm? No guaran-damn-tee it?

To no one’s surprise, WSU’s image shapers did their best to pre-empt any Borghi-as-Carnac moments in the postgame press scrum Saturday night, perhaps thinking that last week’s prediction of victory over Oregon State was, uh, injudicious.

Heck, some of his teammates thought that.

“Max is pretty bold,” said his roommate, quarterback Anthony Gordon. “Have to tell him to keep his predictions down.”

Even if they all come true?

And if Borghi wanted to dial back the wattage from the spotlight, he could have begged off the postgame with a legitimate excuse.

Packing for a bowl game.

In one of the most improbable – and certainly goose-bumpable – finishes in WSU football history, the Cougars overcame an 11-point deficit and pulled out a 54-53 victory over the Beavers with 2 seconds on the clock. It ran the win count to six for the season, making the Cougars eligible for the postseason for a fifth straight year.

And the deciding points? They came on a 2-yard run by none other than Max Borghi.

“Feels good,” Borghi admitted. “I had to back myself up.”

And, yes, a run. Seventy passes Gordon threw in his record-breaking game, and his biggest completion was a handoff.

That must make coach Mike Leach maestro of the Ground Raid.

Of course, it’s entirely possible Leach left it in Borghi’s hands to win or lose simply because he’d written the check the whole team had to pay. Or maybe he figured – on a team whose leadership he’s called into question multiple times this season – a rash prediction might be just the thing, and why not let the rashest Cougar of all to make it happen.

Or else it was just the right thing to do.

“It was a really good box,” said Leach, noting the Beavers were selling out expecting a pass with just 4 seconds to play. “They called timeout and then it’s guesswork. We changed the set and we were prepared to check it from the sideline and we were trying to get Gordon’s attention. We felt we should run it – and they sold out on the pass and we ran it.”

It was a no-doubter – even if the Beavers weren’t the only ones caught by surprise.

“I was not expecting a run play,” center Frederick Mauigoa confessed.

He should have been. The chants from the bleachers – “Bor-ghi! Bor-ghi!” could have told him as much, not that the popular vote matters much in college football.

But this was, bottom line, a night for pure sentiment.

It began with the usual pregame ceremony for the WSU seniors with a highly unusual emotional detour: the introduction of Kym and Mark Hilinski, the parents of former Cougar quarterback Tyler Hilinski, whose suicide last year rocked the program to its core. The Cougars’ other 13 seniors greeted the Hilinskis en masse, and the tears could be seen from the farthest reaches of Martin Stadium. 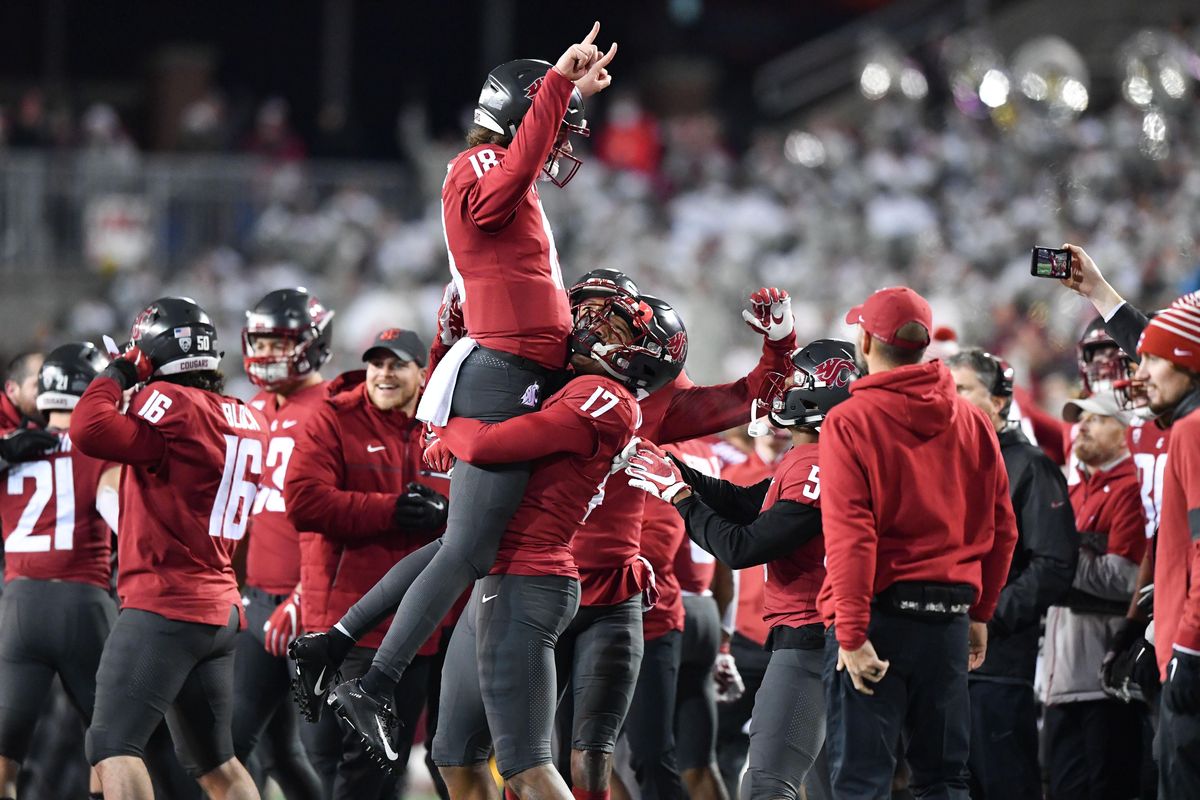 Washington State Cougars quarterback Anthony Gordon (18) is hoisted skyward by Washington State Cougars wide receiver Kassidy Woods (17) after WSU scored the go-ahead touchdown in the final moments of the second half of a college football game on Saturday, November 23, 2019, at Martin Stadium in Pullman, Wash. WSU won the game 54-53. (Tyler Tjomsland / The Spokesman-Review)

Then came the seesaw game – more like whipsaw, really – between two teams with terrific offenses and sometimes only token defenses. Even with 10 minutes to play, the Cougars looked to be in control, up 10 points. Barely 6 minutes later, they trailed by 11.

The two touchdowns that brought them back were things of crisp efficiency, yes, but more than that a steely poise that the Cougs have rarely demonstrated this year. A fourth-and-8 conversion on a Gordon pass to Tay Martin was significant – every bit as much as the audible on the deciding play.

And now it’s on to the Apple Cup, a game that looks very different now than it did even a month ago.

The Cougars arrive on a modest two-game winning streak, but with an emotional lift that can’t be measured. Gordon – now the Pac-12 record holder for touchdown passes and yardage in a season – has the offense in high gear, even if three interceptions on Saturday provide a disquieting undercurrent.

Rival Washington, meanwhile, has an offense that can’t get out of its own way, and used an idle week to get geared up to … stumble to a loss at Colorado.

Or, hey, maybe the Huskies were getting in extra prep for the Cougs.

Wazzu, however, has to prove it can deal with the Huskies in any form, having lost six straight Apple Cups. Or it can pray for a repeat of last year’s snowstorm, just for a handy excuse.

But at least one Coug isn’t looking for one.

C’mon, Max. Tell us the score.

You better listen to the Guarantee Kid. He’s on a roll.