It is what a conference’s broadcast arm needs to do.

As Washington State’s 54-53 last-second bowl-clinching victory over visiting Oregon State began, the Pac-12 Network focused on the most important part of pregame: recognizing Tyler Hilinski through a moving Senior Night moment with his parents Mark and Kym.

Sideline reporter Jill Savage described the scene as the Networks’ cameras rolled. The Cougar seniors, Tyler’s classmates before he took his life, along with coach Mike Leach, hugged and comforted the Hilinskis.

From there, Roxy Bernstein and former Iowa and NFL defensive lineman Anthony Herron moved on to a game with outsized importance to both schools. It was a perfect way to handle a touching and tough moment.

• “Four seconds, Washington State needing a touchdown,” is how Bernstein set up “one last play.”

The ball was on the 2-yard line. Oregon State had called time out. The game was on the line.

“Here we go, from the 2-yard line,” Bernstein said. “They’ll run it. Max Borghi into the endzone. Touchdown Washington State.”

Crazy finish on The Palouse. 🌾@max_borghi runs it in with 2️⃣ seconds remaining to give @WSUCougarFB the win, earning the @OpusBank #12Best moment. pic.twitter.com/ASGhavN7HE

Considering what had happened in the fourth quarter, with Oregon State scoring four touchdowns, an OSU recovered onside kick, a failed one for WSU, another Cougar turnover (they had five total) and an unsportsmanlike-conduct penalty that gave the Beavers one last chance. That nine-lateral kick return was unsuccessful.

“We did everything we could do to lose the thing and then found a way to win,” is how Mike Leach described it to Savage in a postgame interview.

• Oregon State coach Jonathan Smith is known for his trick plays. But for most of the Beavers’ bowl-clinching win he played it straight. Until OSU needed a big play.

It came with 7 minutes and 30 seconds left. The Beavers had just scored, to cut WSU’s lead to 42-39. So Smith called an onside kick. It hit a Cougar, bounced back and was recovered by a Beaver. It was the extra possession Smith’s team needed. Three plays later, Jake Luton, the former Idaho quarterback, hit Jermar Jefferson for a 39-yard touchdown and a lead Oregon State probably should have held on to.

• When Anthony Gordon is in rhythm, he can string together completion after completion. It makes playing quarterback seem easy, even if it isn’t.

It also has another impact, one that Bernstein pointed out in the second quarter.

“As odd as it sounds, they can even lull you to sleep,” he said of the Cougar offense’s effect on a defense.

He went on to mention how quickly Gordon releases the ball, something Yogi Roth has pointed out often in his trips to the Palouse. At times, early on in this one, some of Gordon’s quick releases led to poor outcomes. Mainly because he once again didn’t start as sharp as he is capable.

He threw two first-half interceptions. He could have thrown more as Oregon State’s defense showed stone hands at times. And yet he finished 50 of 70 for 606 yards and six touchdowns. Those last two numbers are key, because they not only were the key factor in the WSU win, but also allowed Gordon, the fifth-year senior though only one-year starter, to set Pac-12 records for touchdown passes (45) and passing yards (4,920).

The latter record? It was owned for one season by Gardner Minshew.

He had 279 of those yards late in the second half when Herron marveled at Gordon’s hot streak.

“Seems a long time ago when he was sailing the football over the head of his receivers in the first quarter,” Herron said.

“Kinda like a pitcher,” Bernstein chipped in, “he’s gotta settle in.” 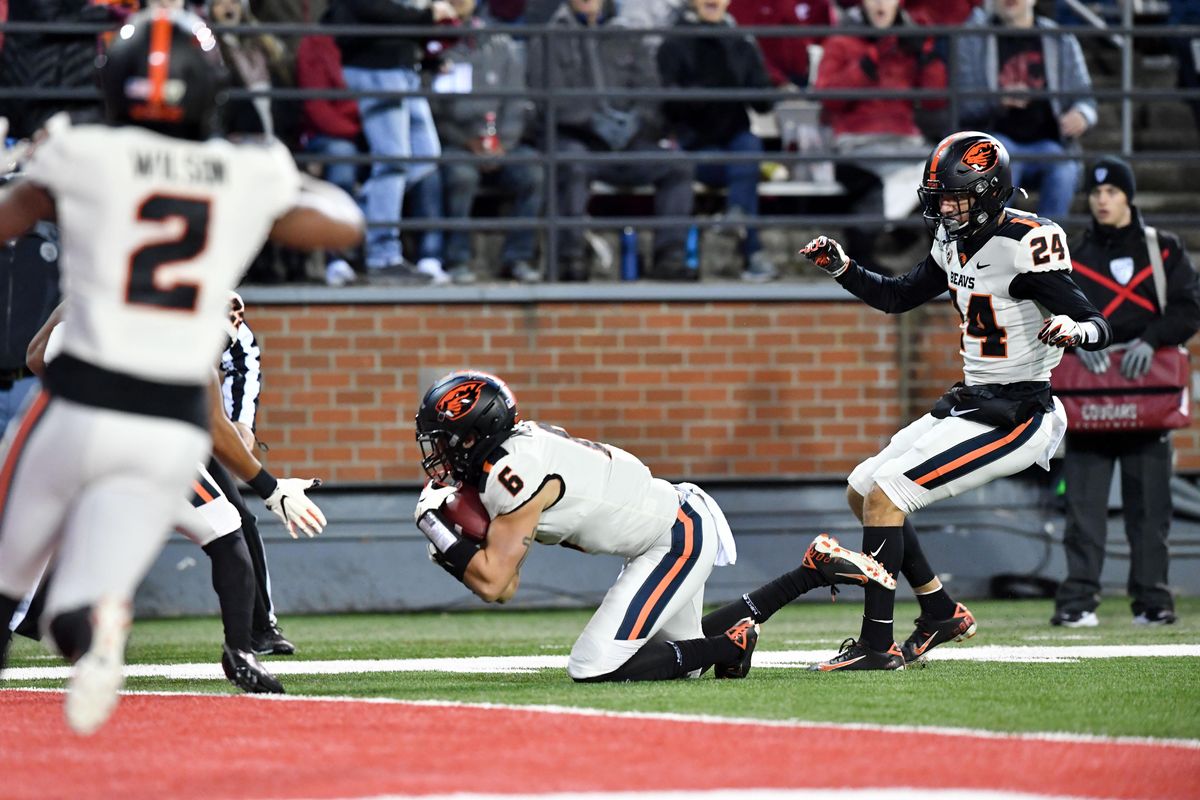 • Roc Bellantoni took over the main defensive coordinator duties more than a month ago, after Tracy Claeys dropped a resignation letter and left town.

No game, however, seemed to bear his imprint than Saturday’s. Mainly in the defensive secondary.

The Cougars’ best cover corner, senior Marcus Strong, was given an assignment. A tough assignment. On each play he waited until he saw which side Isaiah Hodgins set up, left or right. Then Strong would line up across from Oregon State’s leading receiver.

Yes, Bellantoni gave Strong safety help over the top. Occasionally, the Cougars would zone. But for the most part Strong had the assignment. That is not the usual method of operation for the Cougars. They usually leave their cornerbacks on one side, playing whomever is on their side.

Not against Hodgins, who once was a WSU commit.

“Marcus Strong has not made it an easy night for Isaiah Hodgins,” Herron said.

Of Hodgins’ five catches for 65 yards, only one came in the second half, a spectacular one-handed grab for 34 yards.