SEATTLE – The Washington defense held senior Anthony Gordon to 308 passing yards, which were enough to vault him past 5,000 for the season but not enough for the Washington State offense to get a win, and the Huskies won the Apple Cup for the seventh time in a row, 31-13 on Friday in Seattle.

Gordon’s 5,228 yards this season are the 6th-most by an FBS quarterback in a single season.

Sophomore Max Borghi led the Cougars with 22 touches for 108 yards and scored their lone touchdown, which gave Washington State an early 7-0 lead. The Cougars led 10-7 later in the half, but that lead would be their last.

Washington scored touchdowns on three consecutive drives to make it 28-10 at halftime. The Cougars turned over the ball twice in the second half and three times overall.

Washington State’s defense held the Huskies to 342 yards. Among Pac-12 opponents, only Colorado had fewer yards against the Cougars’ defense.

Gordon was held without a touchdown pass in a game for the first time this season.

Washington quarterback Jacob Eason finished 15 of 22 for 244 yards and a touchdown.

The Huskies scored on all five of their red-zone trips, including four touchdowns. The Cougars scored on 3 of 5 red-zone drives, and two of those scores were field goals.

– Dan Thompson, For The Spokesman-Review

There wasn’t a Shelton, a Qualls, a Vea or a Gaines playing on Washington’s defensive line Friday afternoon. The Huskies still got all the pressure they needed, and then some. | Read more »

Sometime in the second half of Friday’s Apple Cup, a Fox camera zeroed in on a couple in the stands, the female decked out in Husky purple, the male in all Coug attire. | Read more »

There have been 112 Apple Cups and, no, Tim Brando hasn’t called them all. It just seems that way. | Read more »

Jimmy Lake didn’t have an opportunity to comment on another dominant effort from his defense in the Apple Cup. The Huskies didn’t make their defensive coordinator available to reporters following a 31-13 win at Husky Stadium. But Lake’s name still found its way into the postgame conversation. | Read more »

9:07 – WSU 7, UW 0: Max Borghi plunges in on a 1-yard touchdown run as the Cougars march down the field on the opening drive.

Borghi got six touches on the drive, three rushes for 7 yards and he caught three balls out of the backfield for 30 yards.

WSU quarterback Anthony Gordon completed nine of 10 passes for 74 yards on the drive. He led a 13-play, 81-yard march that took 5-minutes, 53-seconds off the clock.

Cougs strike first. 💥@gordo1_ hands it off to @max_borghi to push through the endzone for a @WSUCougarFB TD.

UW struck quickly with 57-yard pass from Eason to Terrell Bynum to get into the red zone. Then, after two Salvon Ahmed carries, Eason found the end zone.

Dawgs clap right back. 👏@skinnyqb10 runs it in for a @UW_Football TD, and we’ve got a tie game folks.

Anthony Gordon completed nine of his first 10 passes and handed off to his roommate, sophomore running back Max Borghi, on the 1-yard line to put the Cougars up 7-0 after just six minutes of Friday’s game at Husky Stadium. | Read more »

Mazza capped a 16-play drive with his chip shot. He was called on after the Cougs couldn’t score on three pass attempts inside the UW 10.

On the drive, WSU QB Anthony Gordon reached 5,000 yards passing for the season on a short completion to Tay Martin.

Gordon is 22-of-26 passing for 149 yards. Running back Max Borghi has caught seven passes for 50 yards.

WSU wide receiver Brandon Arconado was sent to the bench during the drive with what appears to be a wrist injury. He was taken into the Cougs’ medical tent on the sideline.

Bynum was well covered by WSU corner Derrick Langford but Eason dropped his pass right into Bynum’s path on the fade route.

UW went 72 yards in 10 plays to take the lead. The picked up a big 3rd-and-13 when WSU’s Bryce Beekman was flagged for pass interference on a pass well over Cade Otton’s head.

Newton got the call three straight times inside the WSU 6, finally finding pay dirt on a run over left tackle.

The Huskies got deep into WSU territory on Jacob Eason’s 25-yard pass to Cade Otton.

Gordon came into the Apple Cup needing just 80 yards to become the 13th QB to pass for 5,000 in a single season. It was a small amount for the nation’s leading passer, averaging 447.2 per game, and Gordon didn’t waste too much time eclipsing 5,000 against UW. | Read more »

For the second straight game, Washington State’s Brandon Arconado took an early trip to the injury tent and missed the remainder of the first half after an apparent injury to the same left wrist that forced him to leave the Cougars’ 54-53 win over Oregon State. | Read more »

Washington QB Jacob Eason connected with Hunter Bryant on 39-yard pass to move the Huskies inside the WSU 5. Eason now has 214 yards passing. Bryant is at 91 receiving yards on five catches.

Sound that siren, we got another @UW_Football TD. 🚨@iRiichh drives it into the endzone yet again. UW leads 28-10 in the 3rd.

The Cougars steadily moved the ball down the field, but stalled in the red zone.

After reaching the UW 9, Anthony Gordon was sacked on first down and then threw incomplete on the next two plays before Mazza was summoned.

The Cougars had opportunities to cut into the Huskies’ lead, but a fumble by Deon McIntosh at the UW 9 and an interception by Anthony Gordon on the following possession wiped out two drives.

After the Gordon interception, UW ran the ball five straight times before calling on Henry.

Here’s how you can listen to The Boeing Apple Cup!

Check out the Coors Light Cougar Football game preview of The Boeing Apple Cup matchup in Seattle with @M_Chaz and @AlexBrink10#GoCougs | #JoinTheHunt pic.twitter.com/cdv9DAENum 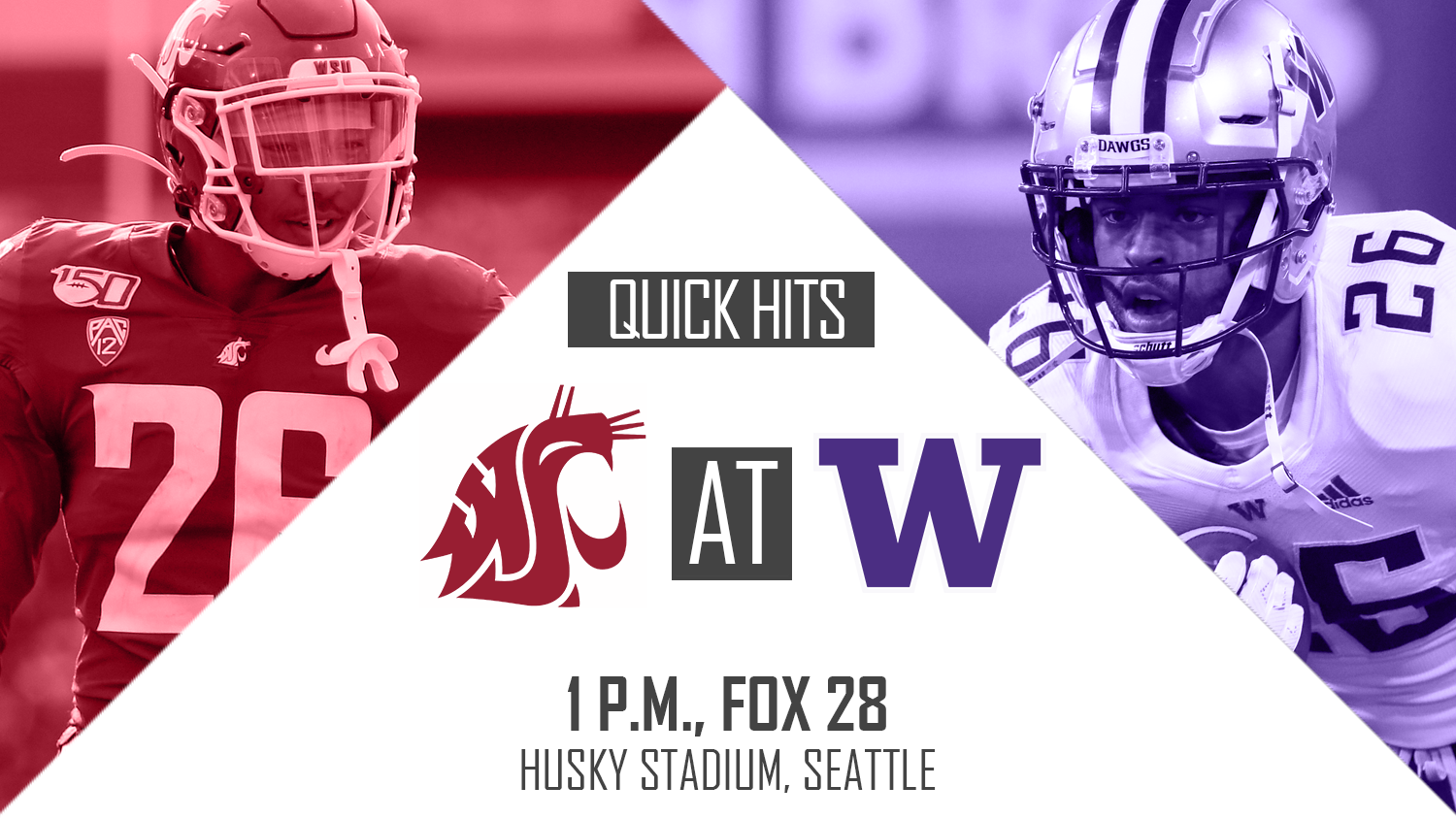 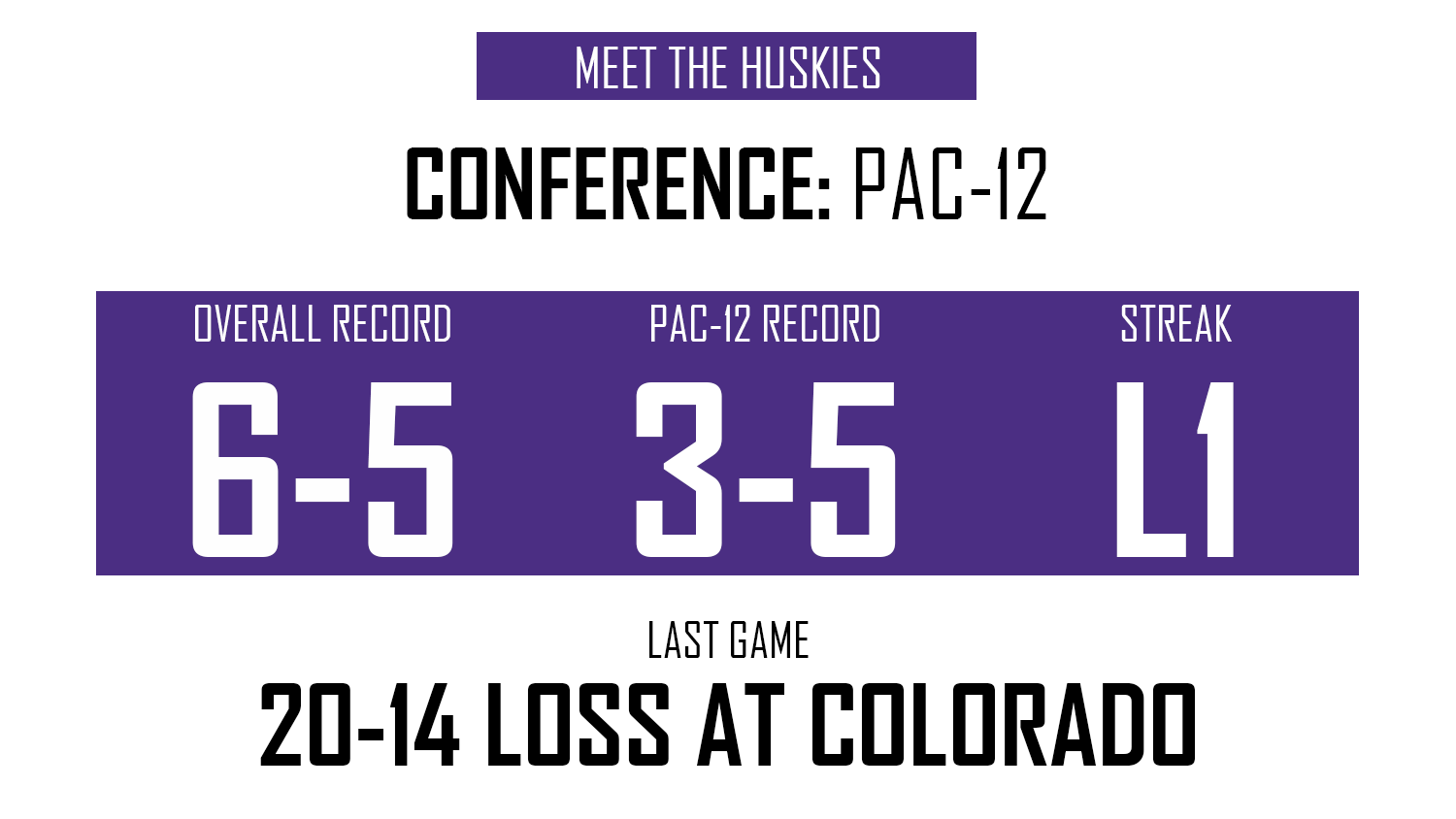 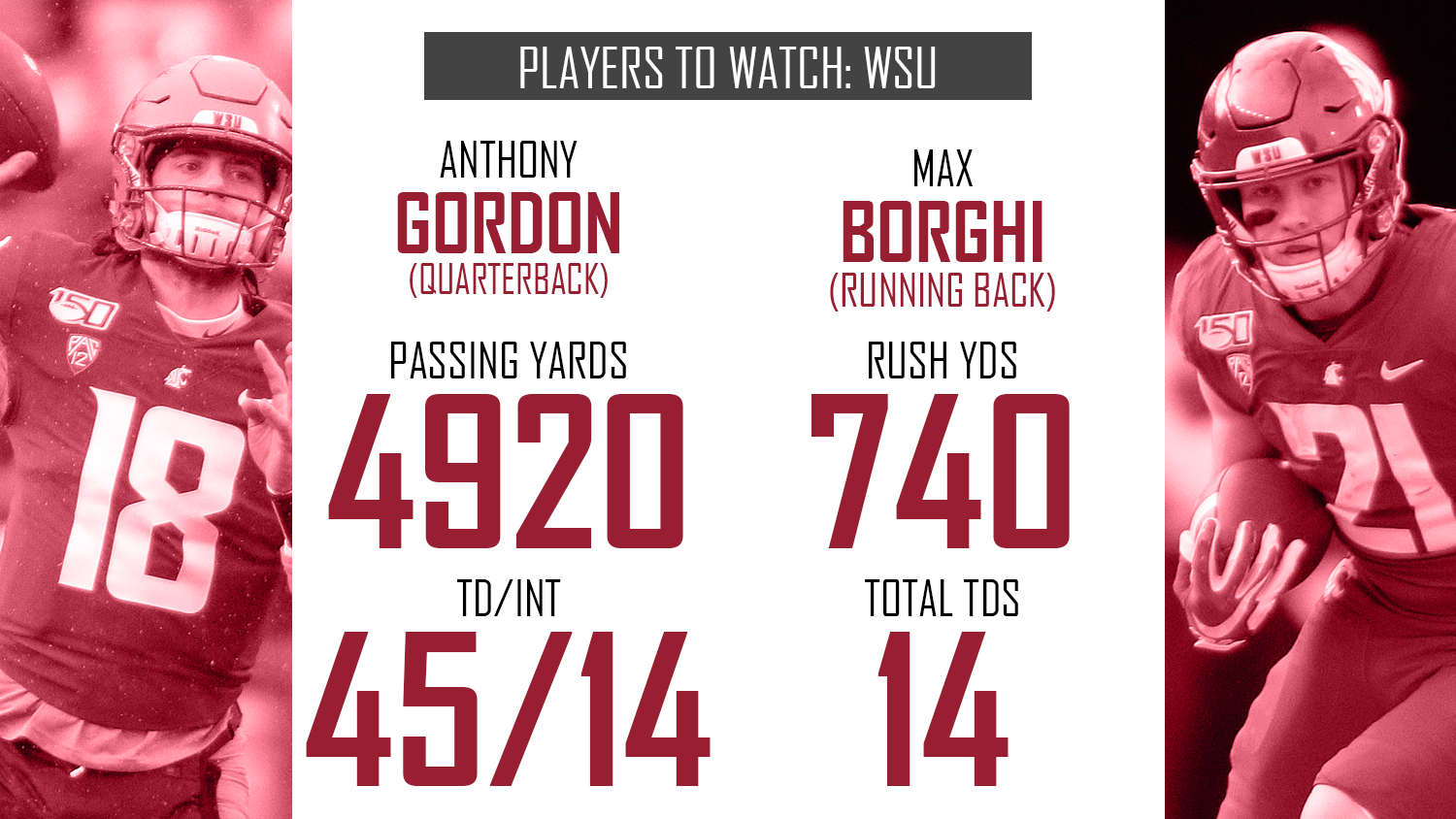 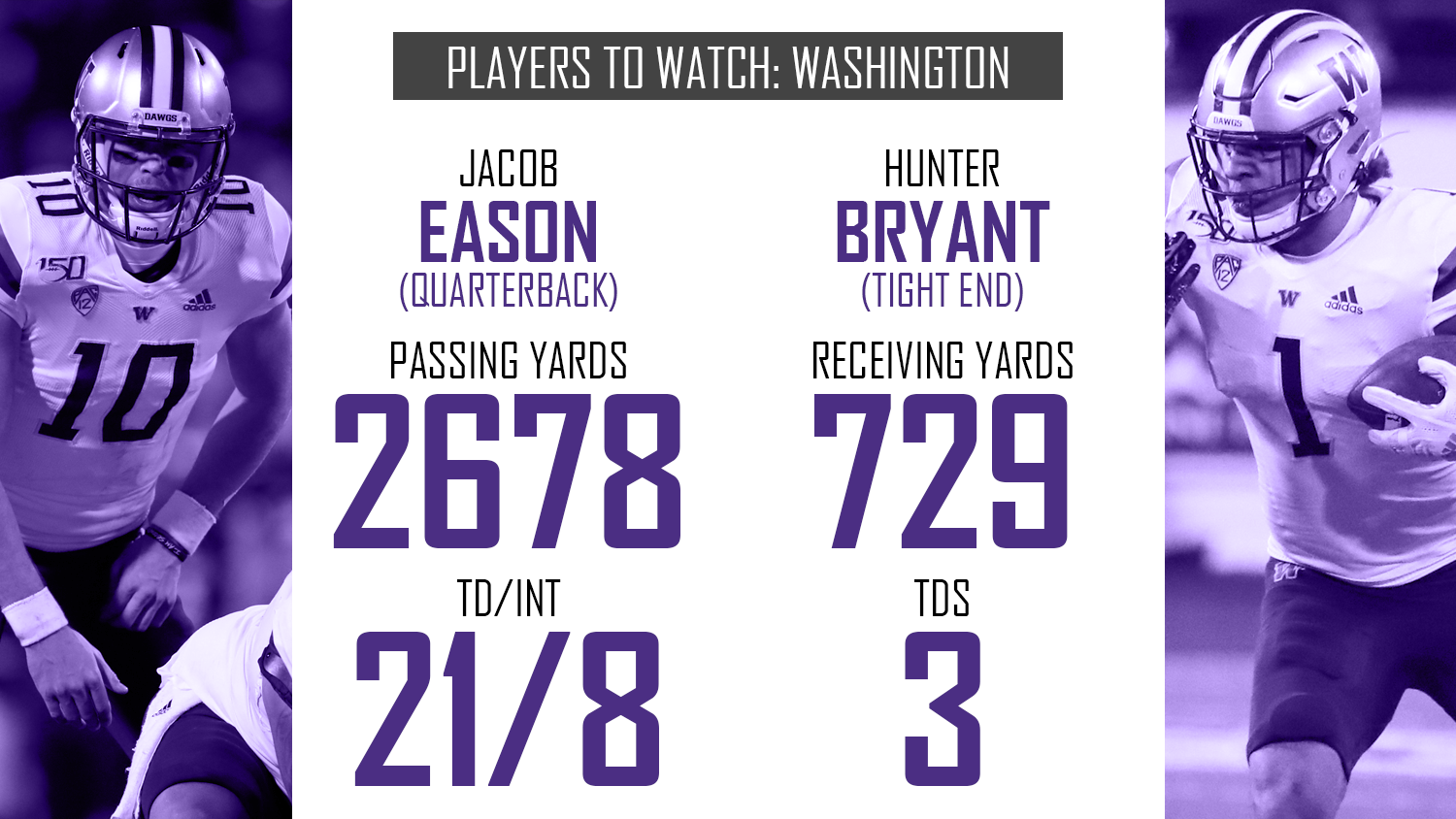 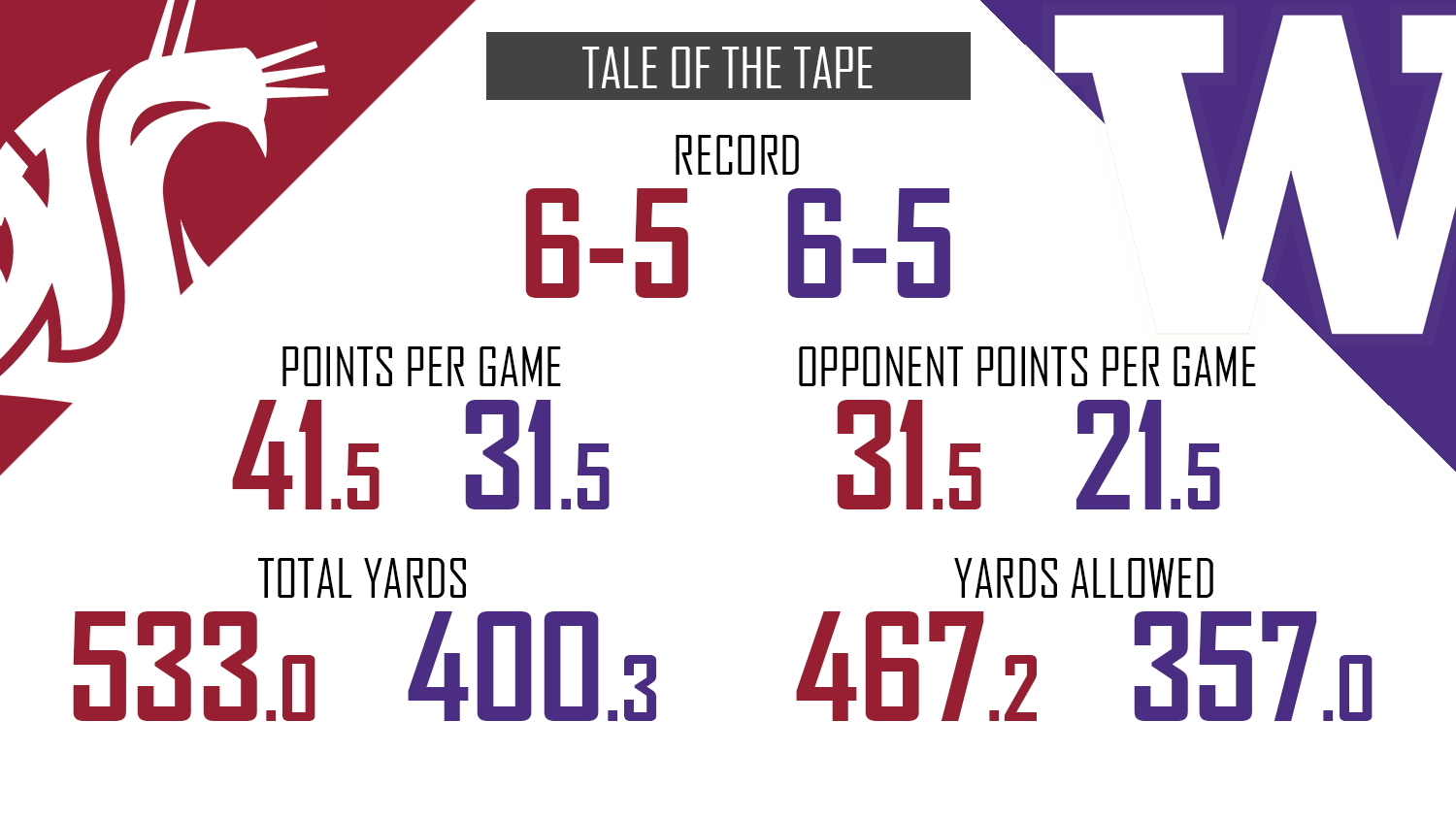 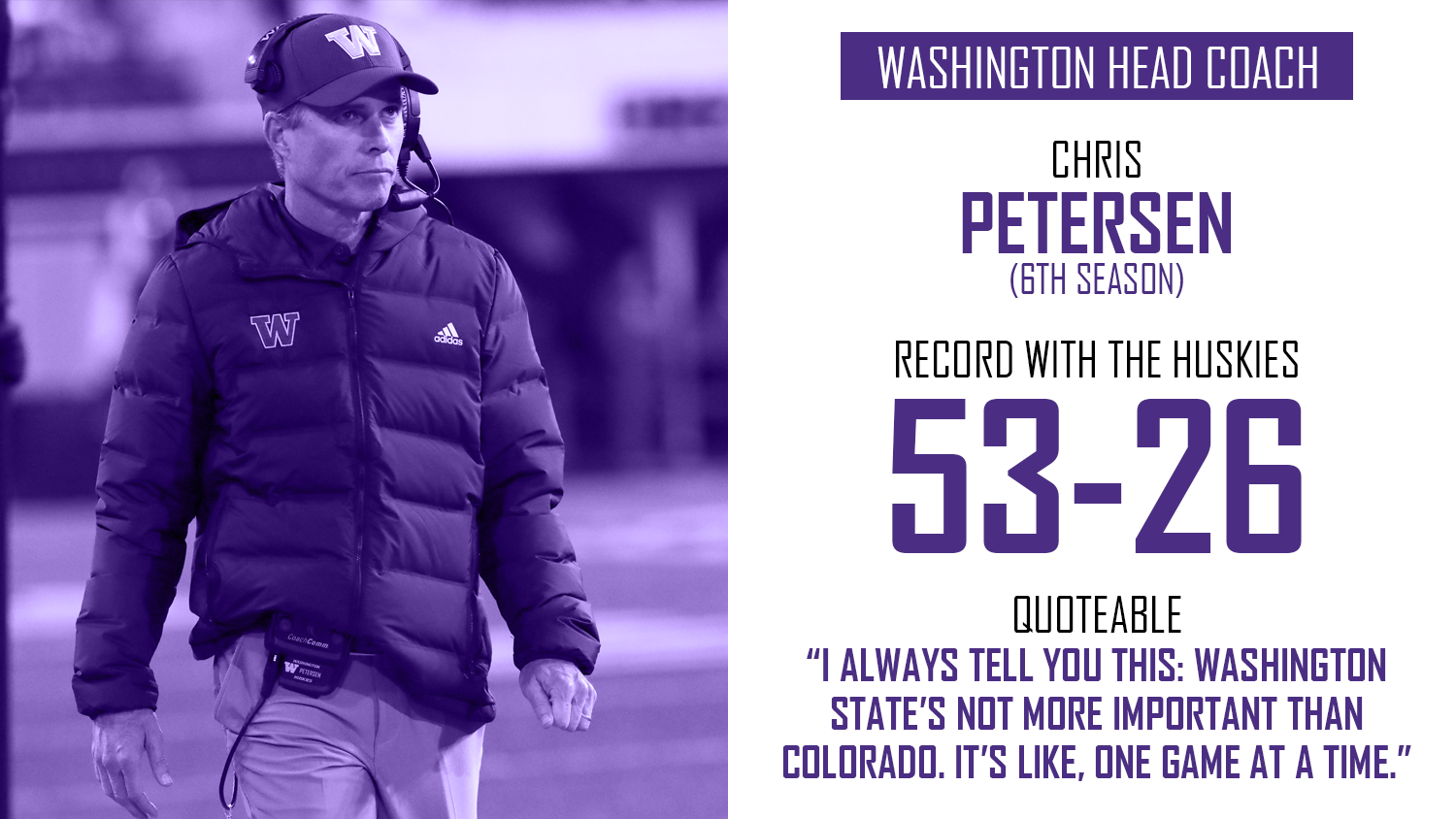 Washington State will feature plenty of crimson for the 112th Apple Cup. The Cougs will be in their traditional white, road jerseys and gray helmets over crimson pants. The logo and facemask on the helmet will also be crimson as well as the numbers on the jersey.