A GRIP ON SPORTS • In the spirit of the day, we want to clarify all of our comments of the past month or so. Like LeBron James, we didn’t speak all that clearly earlier.

• Seriously, though, when are people associated with the NBA going to learn not to comment about Daryl Morey’s Hong Kong tweet?

Anything they say is going to be held against them, either by the Chinese government – bad for the multibillion dollar basketball business – or by those who support folks willing to risk it all for basic human rights – most of the NBA’s fan base.

It’s the Kobayashi Maru scenario all over again.

And last night the fictional ship exploded in James’ hands. 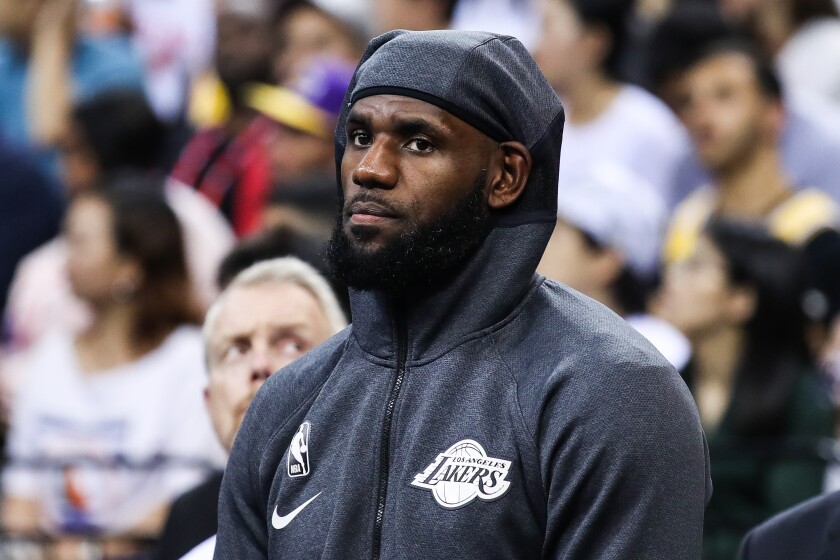 He was asked about Morey’s recent tweet in support of Hong Kong protesters. That tweet led to the Chinese government and state-owned businesses to threaten the NBA and, and as a result, the league to cancel much of the preseason meetings, discussions and appearances in China. And everyone near a microphone apologized in some way. No one in the league offices or on the courts wants to risk losing billions in current and future revenue.

James’ answer last night before a game – he said Morey was “misinformed” before he tweeted – opened up another can of worms. The comments made the social media rounds. The NBA’s biggest star was roasted. So, after the exhibition with Golden State, James attempted to clarify his comments. He wasn’t speaking about the content of the tweet itself, James said. He was speaking about how much of an impact it would have. And when it was sent.

If Morey had only been informed a few words would, you know, jeopardize all that money, he wouldn’t have done it. Or at least waited until all the business meetings in China were done.

James, who has commendably stood up for many causes in his career, emphasized everyone – in America anyway – has the right to free speech, but exercising that right can come with a cost.

Damn right it can.

Morey’s tweet may have cost James and others monetarily. And that’s too bad. But the subjects of the tweet are risking a lot more. They feel the cost every day.

For the folks in the streets of Hong Kong, who felt they were guaranteed certain rights when the became part of greater China a couple decades ago, that cost includes being shot at, gassed and harassed by the police. And yet they are still standing up for their rights.

The impact of what they are doing is clear. No clarifying needed. And no hypocrisy either.

• We were going to write a bit today about baseball, but have decided to put it on the back burner. Not because we are worried about ramifications of what we write, monetarily or whatever, but because there will be more impact if and when the Washington Nationals win the National League Championship Series.

When they overcome the Cardinals and make the World Series – after last night’s win they lead 3-0 – in one regard they will leave the Mariners behind. And we want to discuss that in great detail. But it will have to wait. No jumping the gun. Not yet.

WSU: Now that Tracy Claeys is no longer on staff, Mike Leach is willing to open up a bit about what he saw as failings in the defensive posture all season. Theo Lawson has more on Leach’s comments yesterday from his media availability. … Will the defense play better against Colorado this Saturday? Theo has his first look. … He also looks at the starting time next Saturday at Oregon. … A whole bunch of former Inland Northwest football players are trying to make an XFL roster. Theo has more here. … Leach felt the effort was there last Saturday. … The Buffs are working on some issues as well. … Elsewhere in the Pac-12, there are always awards to be given out, even in midseason. … Washington is dealing with some bad injuries as the Huskies prepare for Oregon. Can they ruin the Ducks’ season? … Oregon State possibly has an important injury as well. … Utah will face a tough challenge from Arizona State and its dual-threat quarterback. … UCLA and Stanford have similar situations at quarterback. … Clay Helton hasn’t done all that well against the big boys. But USC has some hope for the future. … Will Arizona make a change at quarterback this week?

Gonzaga: A couple of the Zags’ WCC games will appear on the CBS Sports Network. Jim Meehan has more in this story.

EWU: Larry Weir called yesterday and we talked about the weekend. Then Larry spoke with Ryan Collingwood and they talked about Eastern’s big win. Both interviews are part of the latest Press Box pod.

Whitworth: We’ve lived in Spokane a long time. And in that time, we can count on one hand the men’s basketball coaches at Whitworth. The newest one, Damion Jablonski, assumes the helm as practice starts today. Dan Thompson has the story.

Seahawks: Don’t expect to see Will Dissly the rest of this year. His Achilles injury is bad. … Baltimore will give the Hawks a test, especially the Hawk defense. … I haven’t seen a story yet about Earl Thomas and his middle finger visiting. They are coming. Wait, I found one. And another. … Let’s take one more look at the win over the Browns. … Russell Wilson is doing so well, his play is getting recognized even in the Eastern Time Zone.

• There are two baseball games today. One includes the one team America loves to root against. The other is in Washington D.C. Until later …