Hundreds of kids are on the waiting list to gain admission to Spokane International Academy, which is no surprise to the students and teachers in the city’s largest charter school.

In Ashley Peak’s eighth-grade class, students are writing well-researched letters to The Spokesman-Review about the worldwide refugee crisis.

Students in every grade are taking four hours of Spanish each week, and international studies goes “way beyond flags, food and festivals,” said Travis Franklin, SIA’s founder and head of schools.

That’s because SIA has two campuses, one in Hillyard for kindergarten through fifth grade and a Middle Academy in East Central for sixth through eighth grades.

But like its students, SIA is looking beyond the horizon. The school recently closed a deal on the former Guardian Life Insurance building on East Magnesium Road, north of the city. 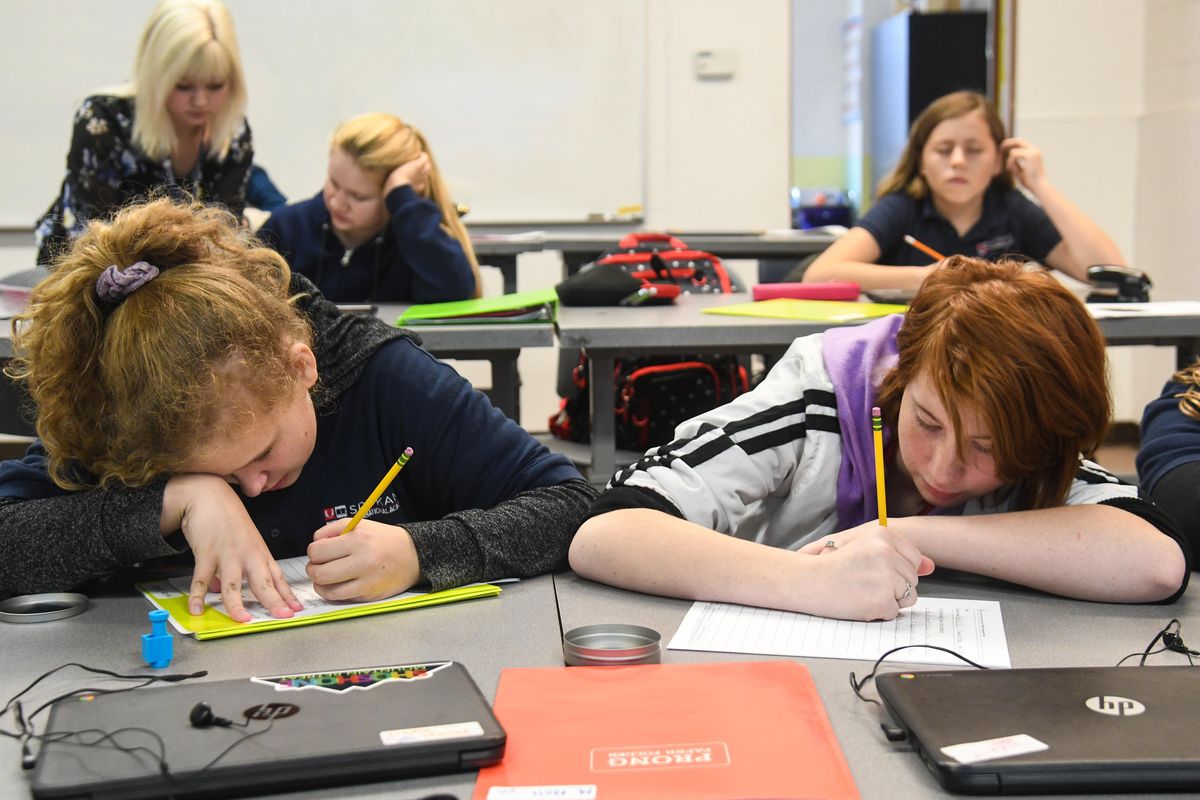 Spokane International Academy students Hailee Liedle, front left, and Madison Noll, right, pore over an English assignment as teacher Kassie Sikes, top left, assists Jasmine Lane, with Evelyn Hall is at to right, Wednesday, Oct. 16, 2019. The Spokane International Academy is a charter school with about 500 students on two campuses.They recently purchased land up north that will allow them to merge the two buildings. (Dan Pelle / The Spokesman-Review)

SIA plans to lease the facility for 10 years, then buy the property, which had been listed for $9.7 million.

At 100,000 square feet, the new facility will not only accommodate its current students, but tear up the waiting list and create a “more cohesive experience for the students, parents, faculty and staff,” said Ken Vorhees, chairman of SIA’s board of directors.

By most accounts, the educational experience is already quite cohesive – even as it allows more instructional freedom for teachers and students.

“I love being able to teach without pressure,” said Sarah Clarizio, who mostly teaches upper-grade science but also a segment on forensic sciences.

No matter the subject, Clarizio said she appreciates that “I don’t have to be on a certain page on a certain day. I feel like I have a lot of freedom that I wouldn’t necessarily have in another school.”

They also have more time to teach. At the Middle Academy, classes run from 8 a.m. to 3:30 p.m. from Monday through Thursday, ending 135 minutes early on Friday. That’s five hours per week more than Spokane Public Schools.

Classes begin 15 minutes earlier at the K-through-5 Primary Academy, but total instructional hours are the same.

Clarizio said some students at SIA were perceived as lazy at their former school, or perhaps not feeling motivated to perform in the classroom.

“We try to create engaging projects and use our creativity to help those students,” Clarizio said.

Academically, the payoff comes in the extras: Spanish, forensics and extra emphasis on STEM education at all grade levels.

“The staff and the teachers, the way that we’re learning, it’s different because it’s more personal,” said eighth-grader Gracie Hernandez.

In Peak’s class, Hernandez and her classmates were combining English and world events by writing poems addressing the worldwide refugee crisis – another example of cross-disciplinary education.

That happens in the overall public school system, but the approach seems more all-encompassing at SIA.

“We’re trying to be globally minded, to be aware and opening minds,” Hernandez said.

Given the school’s name, that global emphasis isn’t coincidental.

Franklin, 35 years old and a lifelong Spokane resident, taught in Mead for several years. However, he and other teachers tossed around a seemingly utopian idea: “If I could just have my own school, this is what I’d do.”

Soon the idea was refined to something bordering on a mission statement: “If we were to build a school that was designed to prepare our students for success in a global 21st century, what would it look like?”

But would it be possible? Franklin took the lead in the fall of 2013, inviting 15 educators and community members to Gonzaga University for a presentation about opening a charter school.

A 500-page application was sent the following summer to Spokane Public Schools, which approved the charter in September 2014.

Less than a year later, SIA opened its doors to 160 students from kindergarten through sixth grade.