A GRIP ON SPORTS • There is a question going around the Interweb right now. It is, like many online questions, actually a joke. “What are the only two major league franchises never to lose a World Series game?” The answer is, of course, the Mariners and the Washington Nationals. The surprising aspect, however, is one of those teams has actually won a couple games.

• There was too much to watch on the tube last night. The Sounders were battling their way past Real Salt Lake in the MLS Western Conference semifinals. HBO was premiering its behind-the-scenes documentary on Washington State football. And then there was the World Series. 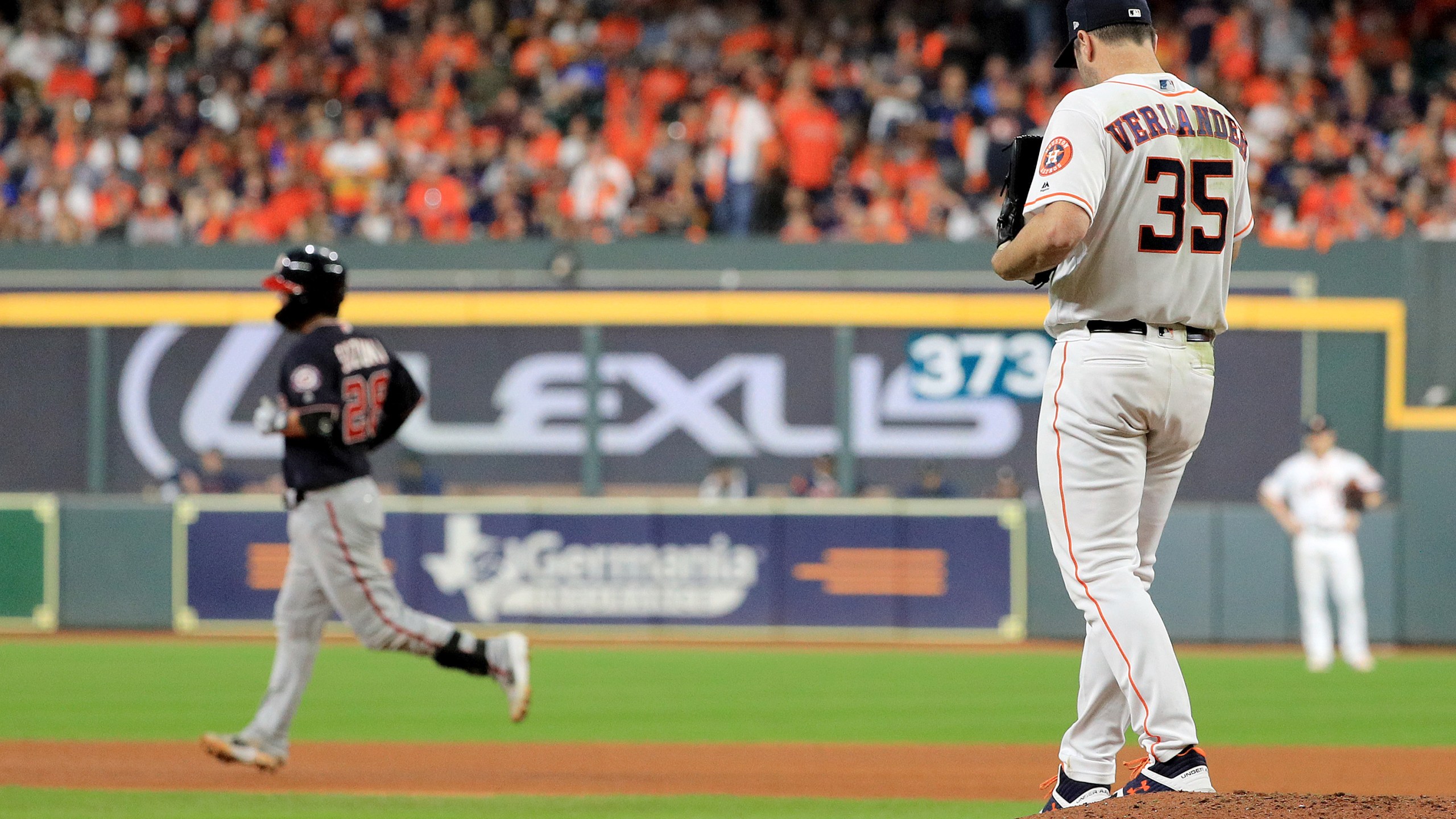 Well, not really. The World Series is wired into my DNA. It doesn’t matter who is playing, that’s my choice. Has been since, I don’t know, 1965 maybe. That’s a long time. Back then the pitching matchup might have been Sandy Koufax versus Jim Kaat. A good one. But not nearly as good as last night’s Justin Verlander versus Stephen Strasburg duel.

Even if both gave up a couple early runs.

In the end it seemed like a laugher. The Nationals, the underdog riding a wave of momentum, scored six times in the seventh and ran away with a 12-3 victory.

But it wasn’t like that for two-thirds of the night. The two righthanders dueled for six innings until the dam broke.

For Verlander, it was a flood. And has been in most of his World Series starts. The future Hall of Famer has lost his first five World Series decisions, the first pitcher to ever do that. (As an aside, the two best pitchers of that generation, Justin Verlander and Clayton Kershaw, may be best remembered by their failures in the postseason more than their successes everywhere else.)

And the Nationals, even though former Mariner Fernando Rodney pitched an inning, took a 2-0 lead in the Series. And they are headed home for three games.

It’s a fairy tale wrapped in a Harry Potter book cover. There has to be some sort of magic potion in play here straight out of a bad 1930s movie. Unless, of course, you realize, the Nats are a good-to-great team with one major weakness (the bullpen), a weakness that they’ve been able to cover up in the postseason.

And the Astros? They are a great team. But with that term comes great pressure and they aren’t handling it well.

Maybe a change of scenery will help. If not, it could be a short Series. And though that would free up some TV time, it wouldn’t be as much fun.

• I put the HBO series into the queue. I’ll watch it tonight, probably. It seems like must-see TV. At least Theo Lawson thought so and I trust his judgment.

But what’s not to like? A behind-the-scenes look at Mike Leach’s day-to-day operation? Yes please.

• Thanks to the magic of the remote, and commercials, I was able to see a little bit of the Sounders’ match. What I saw was a physical one that once again showed how important it is to play at home in the MLS playoffs.

Soccer is a game of winning close decisions, and the home team usually has a bit of an advantage in that regard, especially close decisions that need some adjudicating.

Guess what? If the LA Galaxy can upset rival LAFC in the Battle of Exposition Park tonight, then the Sounders have home-pitch advantage in the Western Conference and MLS finals, if they get that far.

WSU: As we mentioned above, Theo has the highlights of the HBO show. Spoiler alert: The entire story is a spoiler. … Oregon’s defense has been lights out – against teams with a power shortage. Theo contemplates whether the Cougars can give the Ducks another jolt. … He also answers your questions in his weekly mailbag. … In basketball news, Borislava Hristova has earned a preseason honor. … Elsewhere in the Pac-12, the powers that be in the conference are meeting this week. … Is this the year Oregon ends its losing streak to WSU? Some folks think it is. … The Ducks are strong defensively but a little thin at receiver. … The numbers tell the story for Washington. Most of it anyway. … Oregon State has been hit hard by injuries. … Colorado is starting to work on its false start issue. … The Utah defense has a strong back line. … UCLA may be losing, but the Bruins are still trying to have fun. … There is nothing fun with the USC injuries. … Arizona State's secondary is versatile. … Negative plays have impacted Arizona's offense too often. …  In basketball news, Oregon State handled Carroll last night in an exhibition. If you peruse these pictures, you will see a couple of Inland Northwest high school products playing for the visitors.

Gonzaga: Practice is still the only activity for the GU basketball team, but that doesn’t stop its fans from wondering when Killian Tillie might return. Jim Meehan doesn’t definitively answer that question, but he talked with Tillie recently and answers a bunch more. … The Zags will be hosting another highly recruited big man soon. Jim has more in this piece. … Larry Weir and Tom Hudson talked Bulldogs in the latest Press Box pod. … Around the WCC, former BYU coach Dave Rose was hospitalized this week after suffering what was termed a "major" heart attack.

EWU: No one saw this coming. At least no one in college football. When Jerry Louie-McGee came out of Lake City High, Montana didn’t offer a scholarship. He walked on. The fifth-year senior will end his career as the Griz’s all-time leading receiver. Ryan Collingwood has that and more in this story.

Preps: It’s a big week in Greater Spokane League football, what with four teams tied atop the 4A standings with one loss. Dave Nichols and Sam Adams have their picks. … One of those schools, Ferris, is relying on its defense, as Steve Christilaw explains. … Central Valley is once again competing for a GSL title in girls’ soccer, which shouldn’t come as a surprise. However, as Justin Reed writes, the Bears are doing it with a lot of new faces involved. … We can also pass along roundups from yesterday’s soccer and slowpitch action.

Seahawks: Russell Wilson showed up on the injury report yesterday. He is OK, however. … The Quandre Diggs trade blindsided just about everyone. … Who will start at right guard this week?

Sounders: The 2-0 win over visiting Real Salt Lake didn't come without its pitfalls. No rest though. The Western Conference final is on Tuesday.

• If TV-Watching Withdrawal Disorder is a thing – it isn’t – I may suffer from it tonight, what with no World Series game available. Guess I’ll just pull out my Rockford Files blu-rays and watching Jimmy careen around Los Angeles. That’s pretty similar to watching the Nats offense these days. Until later …