The Obamas’ purple-and-chartreuse English garden-themed state dinner for the British prime minister at the time, David Cameron. A lavish wedding in a sultan’s palace in Istanbul under arches of hanging wisteria. A magical Winnie the Pooh storybook ball featuring a giant beehive and hundreds of bottles of honey. Event designer Bryan Rafanelli is behind some of the most fabulous parties of the past two decades.

More than a dozen of those bashes – many with A-list clients and major budgets – are featured in his new book, “A Great Party.” (The introduction is by Chelsea Clinton, whose romantic wedding in Rhinebeck, New York, he planned.)

Rafanelli, who founded Rafanelli Events in 1996, has offices in Boston, New York and Palm Beach, Florida, where he and his staff produce more than 100 events a year. “It’s not just about how pretty a party is,” Rafanelli says. “It’s all about making people feel special.”

Many of his parties can take a year to plan. Yet he and his longtime partner Mark Walsh got married last month in Cape Cod in a ceremony and a lunch that was planned in 30 days. 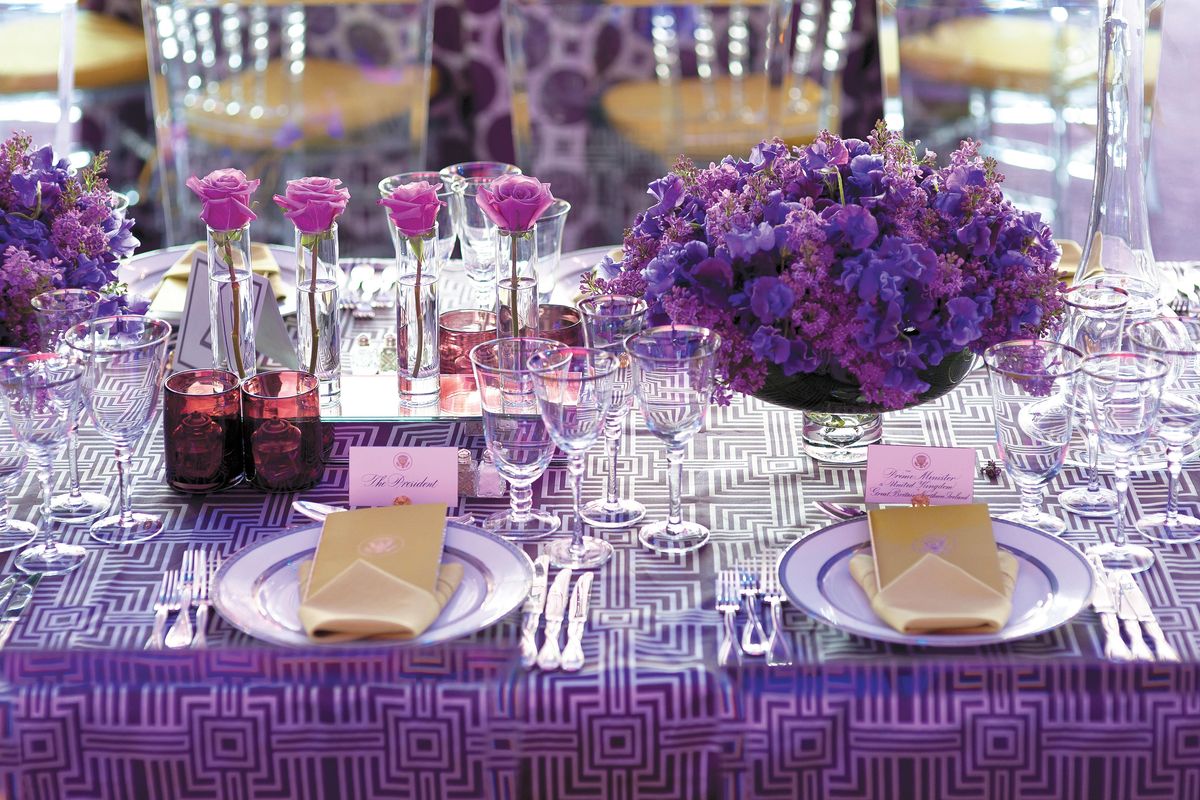 Bryan Rafanelli designed seven state dinners for the Obamas, including the one in honor of David Cameron where White House tables were decorated with purple roses and lilacs and a splash of green. (Genevieve de Manio / A Great Party: Designing the Perfect Celebration)

One little tidbit from the book: Michelle Obama loved the color purple, and she and Rafanelli were drawn to the 1861 Lincoln state china service, which is a reddish-purple color, but there is so little of it that curators don’t let it be used for large events.

Obama was hoping her own official china could be purple but discovered that apparently modern purple dyes don’t work well on fine china. The Pickard China that Obama eventually selected was teal – they call it Kailua blue – inspired by the waters surrounding the president’s home state.

Rafanelli staged a number of events for the Obamas at the White House, including seven state dinners and five kids’ state dinners, which featured towering topiaries of fresh vegetables. He also decorated it for the holidays twice.

Though most of us can’t afford to decorate with hundreds of blossoming cherry branches and black crystal candelabras, some of Rafanelli’s best party tips can be adapted to just about any gathering.

Throw in an element of surprise. Stage a “wow” moment. “And I don’t mean bringing in a marching band,” Rafanelli says. Surprise people by removing the furniture from your living room, installing a table and having the dinner party in there. Take steps that say, “Look what I took the time to do for you because you are very important to us, and we wanted to make you feel special.”

One of his favorite ideas for a birthday party: Put a different old photo of the person being honored under every dinner plate. When the plates come off the table, the photos spark conversation.

Keep it simple for table decor. Fruits, flowers or vegetables can be arranged with style. You don’t have to have a giant floral arrangement. A half-dozen small bud vases holding single stems marching down the table is an elegant and easy look. Don’t overthink it; sometimes just a cluster of votive candles around the table can be enough. Vintage salt and pepper shakers are a nice touch.

Create a sense of occasion. A toast totally turns any event into a celebration. Often evenings go by without acknowledging why you’ve all gathered, he says. State the reason you’re there with friends or family, whether it’s just to be together or to celebrate a special milestone.

“If you host a party in your home, there should be an opening and a closing,” he says. “Welcome people after you all sit down to eat. I think it’s gracious if you are getting up from the dining table to go into another room to just simply thank everyone for coming.”

Embrace the bold statement. There is strength and power in numbers, Rafanelli says. The abundance of multiples of the same item makes an impact. In his book, there is a party where 1,000 wine bottles are lined up behind a bar and 250 vintage books form a backdrop for a book signing.

Rafanelli often sends his staff to CVS or Duane Reade to see what cool items they might be inspired to incorporate into a festive setting. The 10,000 tiny red drugstore bows that decorated columns at one of the Obama White House Christmas celebrations made a strong yet inexpensive statement.

Trick out your glassware selection with color. Cobalt blue water glasses, pink tumblers or green goblets can do a lot to dress up your table. Everyone seems to think that, at a nice dinner, the clear crystal glasses for wine and water should all match, he says. That isn’t the case. Rafanelli says he often chooses a jewel-toned glass for water at parties. Vintage wine goblets and tumblers in great colors can often be picked up inexpensively at thrift shops or flea markets.

Don’t pooh-pooh placecards. Placecards should not just be reserved for formal affairs, Rafanelli says. You can use them to shake up the vibe of a gathering. “You are rearranging the conversation by deciding who will sit next to who,” he says.

“Put people of different ages next to each other, and it creates connectivity and conversation, and that’s what a dinner party is all about.” Hand write the place cards to show how personally you are taking all the details of the gathering.