At the first stop on Tom Mueller’s national tour for his book “Crisis of Conscience: whistleblowing in an Age of Fraud” in his hometown of Spokane, the author discussed tracing the history of whistleblowing back to America’s Founding Fathers with the Northwest Passages Book Club.

“They took on a supreme monarch and a heavy load of tradition,” Mueller said about their legacy of questioning authority.

In his book Mueller traced that heritage to today and detailed how it informed people like Edward Snowden.

But instead of writing directly about Snowden, Mueller said he chose to write about the National Security Agency employees that came before him. Those people went through the proper channels to report unethical conduct, lost their careers and never had their message spread, which taught Snowden to act differently, Mueller said.

He said we live in a golden age of whistleblowers, as the number of reports has grown along with the amount of legal protections, as well as films and books, like his own. 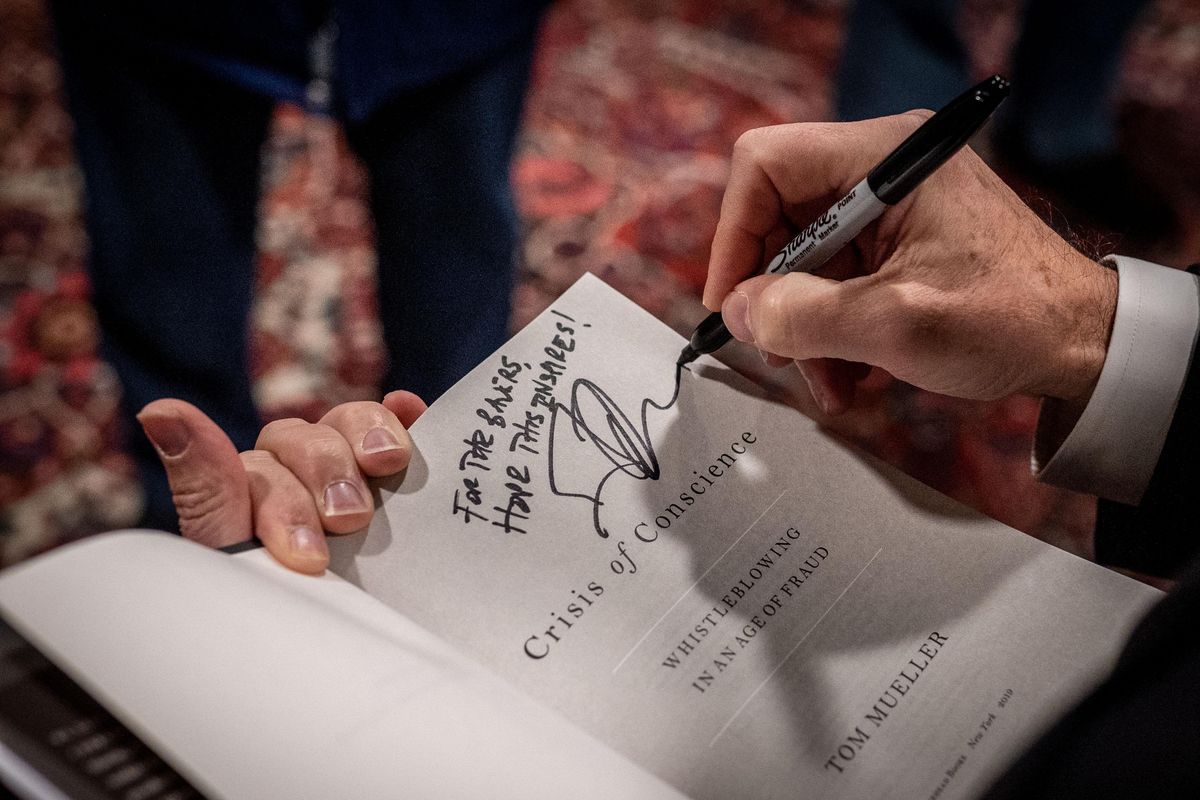 Tom Mueller, author of “Crisis of Conscience: Whistleblowing in an Age of Fraud,” signs his book on Mon., Oct. 28, 2019, during the Northwest Passages Book Club held at the Montvale Event Center. (Colin Mulvany / The Spokesman-Review)

Over the course of researching his book for the last seven years, he said he interviewed more than 200 whistleblowers and at least 1,000 experts in various fields.

For one interview, he spent three days at a remote cabin in Pennsylvania with Allen Jones, a former investigator in the state’s office of the inspector general, who uncovered how state employees were getting paid by pharmaceutical companies. Jones moved there after losing his job and only told Mueller his story after two days of earning his trust.

“We should not need whistleblowers,” Mueller said. “These people should not have to come forward and commit career suicide.”

Part of the reason whistleblowers act in spite of their own well-being, Mueller said, is that they have deeply held beliefs about rules and what is right and wrong.

“They really feel like they have no choice in the matter,” he said.

But he said a whistleblower’s motivations don’t ultimately matter, and they legally make no difference as far as the protections the person is afforded.

“If they have good facts we shouldn’t care,” he said.

Mueller also spoke about the timeliness of his book, considering how a whistleblower’s report led to an impeachment inquiry for President Donald Trump in recent weeks.

“Now we’re faced with how important whistleblowing can be,” Mueller said about the possibility of impeaching a president.

For the average person, Mueller said he hopes his book, with stories about people armed with facts standing up to large organizations, can inspire others to stand up for what is right.

“We just need to be a little bit more like whistleblowers, all of us,” he said.