A GRIP ON SPORTS • Football is a rough, tough game. No doubt about it. So much so, in fact, the biggest news from the first week of the college football schedule, Pac-12 edition, just might be the injuries to quarterbacks.

• Getting through a season unscathed at the most high-profile position may be more about luck than skill these days. Last season, one of the area teams (Eastern Washington with Gage Gubrud) was unlucky while another was as lucky as can be (Washington State and Gardner Minshew).

There is a skill aspect to it, however. It takes a certain skill to keep backups happy and ready to step in. The Eagles were ready and Eric Barriere led them to an 8-2 record and, ultimately, the FCS title game.

Does USC have its Barriere waiting in the wings? Heck, for that matter, does Stanford and Oregon and every other school you can name?

The answer to that is elusive, sure, but we do know the Trojans will need theirs. Starter J.T. Daniels went down in the season-opening win against Fresno State and, with an ACL tear, is out for the season. It will be up to freshman Kedon Slovis to be special if USC is to bounce back from an awful 2018 season. 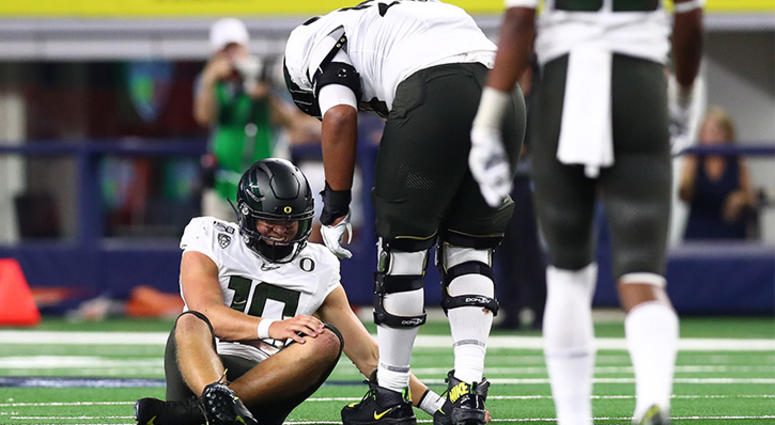 Last week, however, the Trojans were not alone. Stanford lost veteran starter K.J. Costello to a forearm to the chin (while sliding down, no less) just before halftime against Northwestern. He did not return. If he can’t go when the Cardinal travel to USC on Saturday, then Davis Mills will be the guy.

Meanwhile, a minor injury to quarterback Justin Herbert, and the subsequent time-out fiasco, played a role in Oregon’s last-second loss to Auburn. The Ducks’ coaching staff was seemingly unaware a player attended to on the field in college football has to sit out a play no matter what. It used a time out to get him back in and, when told that couldn’t happen, used another to prepare backup Tyler Shough. And still the next play, a key one, failed.

Around here, the Cougars won easily and made sure Anthony Gordon’s backups, Trey Tinsley and, in a bit of irony, Gage Gubrud, got work just in case. WSU coach Mike Leach said yesterday the two were “neck-and-neck” as backups.

(Leach did say, though, seemingly speaking for every head coach, that you better have a backup. And that backup better be ready.)

Barriere stayed healthy all they way through the Eagles’ loss at Washington and Idaho, as is its wont, used two quarterbacks in the blowout loss to Penn State.

It’s not something anyone wants to see. But if you are a backup quarterback – heck, a backup in any position – in college football these days, you better be ready. It’s a rough, tough game.

WSU: One place the Cougars have more depth than maybe any team in America is receiver. One position in particular. The X spot on the outside. Theo Lawson asked Leach about the abundance of players there and how he will work it out. Leach’s answer is in this story. … Theo also has a story on Ryan Hilinski and South Carolina and he spoke with Larry Weir for the latest edition of the Press Box pod. … You can watch video of Leach’s press conference here. In it, he said the Cougars' play was sharper than he expected. … Elsewhere in the Pac-12, the Associated Press poll will be out today. The top two teams are easy. … There are a couple conference games on tap this weekend, one of which is Washington hosting California late Saturday. … If you want to watch Oregon State try to bounce back at Hawaii, you’ll need to be a member of The Facebook. … Speaking of injuries, Oregon has a bunch at receiver. … Intensity should mark this Colorado nonconference game. … Utah hosts Northern Illinois in a game that starts before noon even in Salt Lake City. … It’s not the earliest game of the week, though. Arizona State hosts Sacramento State on Friday night. … The Stanford at USC game is on at the same time as California and Washington. Now that’s good planning. … San Diego State posted a shut out in its opener. Will UCLA be able to crack the endzone with its quarterback play? … Arizona hosts Northern Arizona after a week off in one of three Pac-12 versus Big Sky games this week.

Indians: The regular season is over. Spokane ended it with a 45-31 overall record after a loss yesterday to Tri-City. The two teams will meet in the Northwest League playoffs starting Wednesday in Spokane. … Around the NWL, Eugene finished it season with a win over playoff-bound Salem-Keizer. … Hillsboro, which also won Monday, will match up with S-K in the South.

Seahawks: Are you happy the Hawks were able to trade for Jadeveon Clowney? Credit Duane Brown. … Clowney is looking forward to playing in a 4-3 scheme again.

Mariners: The M’s lost in Chicago yesterday, though Justus Sheffield threw well. … Marco Gonzales gives the Mariners a chance to win every time he takes the mound.

• One of these years I will be able to sit here on Sept. 3 and write about baseball. Write about the Mariners battling for a divisional crown. Write about their World Series chances. I know it. After all, I am going to write this column until I’m 93. Until later …