PULLMAN – Look, winning football is a fan magnet, but there’s still a limit for a discerning clientele.

Which is why that while Washington State has sold an all-time high of 12,327 season tickets this fall, there looked to be that many empty seats at kickoff in Martin Stadium on Saturday afternoon. For all the predictable reasons:

It’s a backlash to the game’s barbarism and the toll it takes on its participants.

But mostly, it was an opponent that was a 38 1/2-point underdog, providing you could find a sports book that would take a wager.

Nor did it make a difference that you weren’t able to see the game on TV unless Larry “The Cable Guy” Scott came to your home with a splitter and some wire cutters. Even a blackout wasn’t going to chase people to the stadium.

This fact was not lost upon the 22nd-ranked Cougars themselves, who barely mustered an engaged quorum for the early stages of the meeting – allowing a human Brunswick named Milo Hall to bumper-bowl for 100 yards by halftime, burning three timeouts on defense in the first 19 minutes and seeing new quarterback heartthrob Anthony Gordon throw (horrors) an interception.

See, it wasn’t a game so much as a rhetorical question, just as it appeared when the schedule was released.

So, back to the issue of fan engagement, and why Wazzu’s best stat of the week was the 91 percent renewal rate for season tickets ecstatically trumpeted by athletic director Pat Chun.

“It’s a reality in our business model: Washington State has to sell tickets,” Chun said, noting “your best customer is always your current customer.” 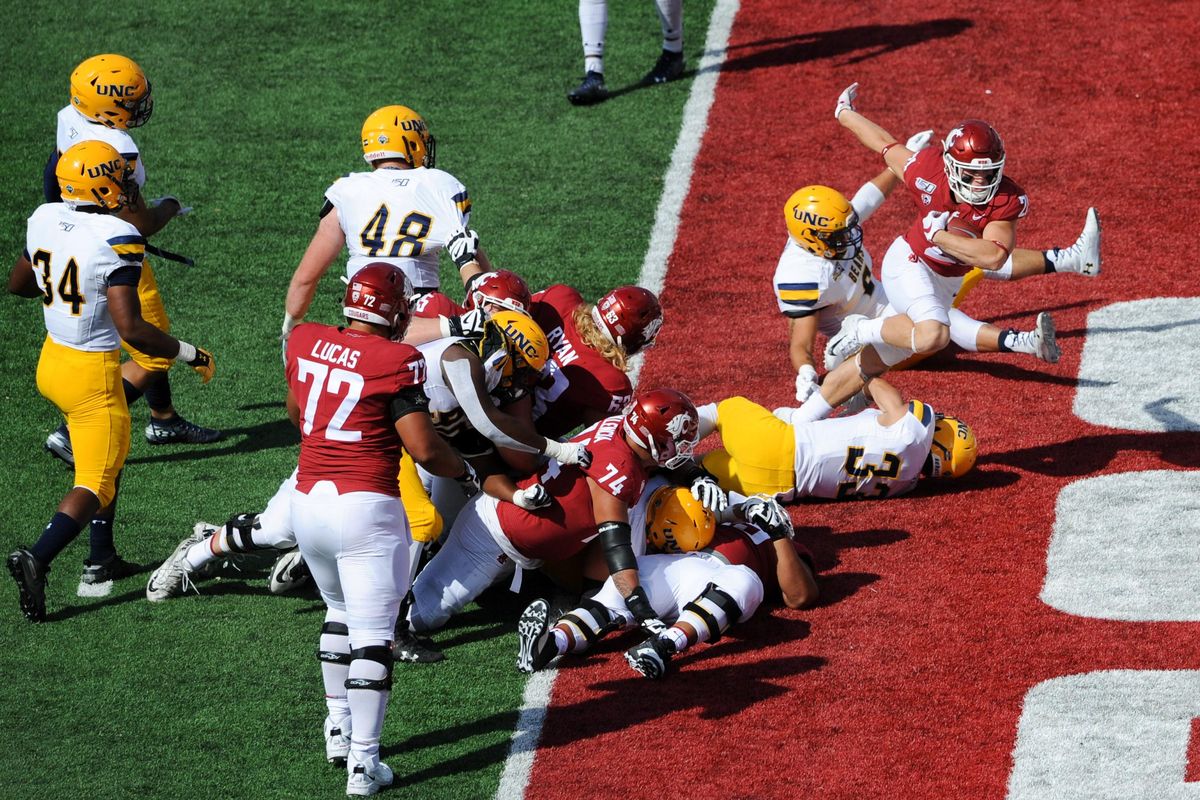 Washington State Cougars running back Max Borghi (21) runs the ball into the end zone for a touchdown during the first half of a college football game on Saturday, September 7, 2019, at Martin Stadium in Pullman, Wash. (Tyler Tjomsland / The Spokesman-Review)

It’s not the only business reality, of course. The Cougars have to fundraise better (and have of late), and they must operate more frugally, and they need 2024 to get here quick so Scott’s promised financial windfall from Pac-12 media rights can make up for the shortfall of his original promise.

But the issue du jour nationally that has athletic directors at least pretending to reach for the worry beads is slippage at the gate.

Wazzu was one of those 42, down almost 1,900. But chalk that up mostly to fans taking a few weeks to decide whether Gardner Minshew was a fluke or a phenomenon – plus not being able to count all the people in town for ESPN GameDay who couldn’t get tickets.

Nonetheless, over the past four seasons the Cougars have played to a house filled to 93.4 percent of capacity – the best such run in school history. There have been 12 true sellouts in that time, and a half-dozen more games that were 95 percent or near it.

“And the last thing I’m going to do is understate the success of our football program as a reason,” Chun said.

No kidding. Wazzu’s jump in victories the past four seasons from the previous four is plus-21; the next best among Power 5s is Kentucky at plus-15.

It’s also true that the Cougs aren’t trying to fill the Rose Bowl. Martin’s bull-ring intimacy is a function of location and history, but that size makes it all the more necessary to have everybody cozy up every Saturday.

“We’re an athletic program that for us to hit our budget numbers we have to run at our current rates or even better – and we’re near capacity now,” Chun said. “I’d be disappointed if we don’t sell out our next three home games.”

“When I got here, you would know anecdotally that our softest game every year is going to be the home prior to Thanksgiving when the students go home,” he said.

Throw in tricky weather, the Pac-12’s wheel-of-fortune starting times and a potentially “meh” opponent in Oregon State, and soft can get downright squishy.

But that’s why drawing just 27,228 for the New Mexico State opener and 27,585 on Saturday was troublesome – the first back-to-back sub-30,000 games since 2013 and the first in season’s first month since before Mike Leach’s arrival. Yes, they were fighting Labor Day getaways last week and, yes, Northern Colorado. But the Cougs are always going to play an FCS opponent; perhaps they just need to make sure it’s Eastern Washington or Idaho as often as possible.

Especially now that winning has made the clientele more discerning than ever.